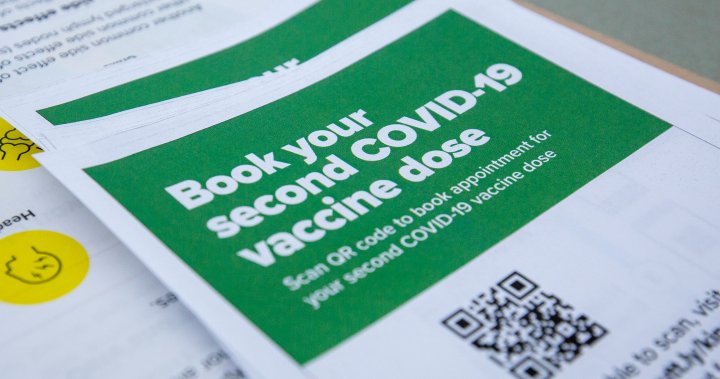 The percentage of Canadians who have been fully vaccinated against COVID-19 has for the first time surpassed the United States.

This comes less than two months after Canada eclipsed its southern neighbour in terms of single-dose coverage.

The vaccination gap between the two countries started slowly narrowing as Canada began ramping up its distribution in May. The supply of doses is now on the verge of outstripping demand, according to government officials.

On Thursday, Brig.-Gen. Krista Brodie, the military general overseeing Canada’s distribution of COVID-19 vaccines, said the country was moving to a “more nuanced” approach, with more than two million doses of vaccine already being held back because provinces have said they can’t use them yet.

Meanwhile, the U.S. too has an abundance of vaccines as its vaccination rate has slowed down. Experts believe it may be because vaccine hesitancy is higher south of the border than in Canada.

Canada has already surpassed the U.S. and administered more COVID-19 vaccine doses per capita, according to Our World in Data. On May 5, Canada reported a rate of 0.66 per 100 people, surpassing the U.S. — at 0.64 per 100 people — for the first time. And the gap has only continued to widen since then.

Meanwhile, cases of COVID-19 have tripled over the past three weeks in the U.S., and hospitalizations and deaths are rising among unvaccinated people.

Read more:
COVID-19 cases are rising in the United States. Will this impact Canada’s border reopening?

While the rates are still sharply down from their January highs, U.S. officials are concerned by the reversing trends. Cases are expected to continue to rise in coming weeks.

The spike in numbers also comes as the Canada-U.S. border closure is set to expire, on July 21.

Some experts warn that the U.S. coronavirus infections may affect the border opening and say it should also be a cause of concern for Canadians — even if they are fully vaccinated — wanting to travel down south this summer.

“It makes Canadian travel difficult with some states,” Raywat Deonandan, an epidemiologist at the University of Ottawa, told Global News on Wednesday.

“It is advisable for Canadians going to American states that have grown in the Delta variant, in particular, to self-quarantine when they come back, seek out a negative test or to not go in the first place.”

— with files from Global News’ Katie Dangerfield, the Associated Press and Canadian Press