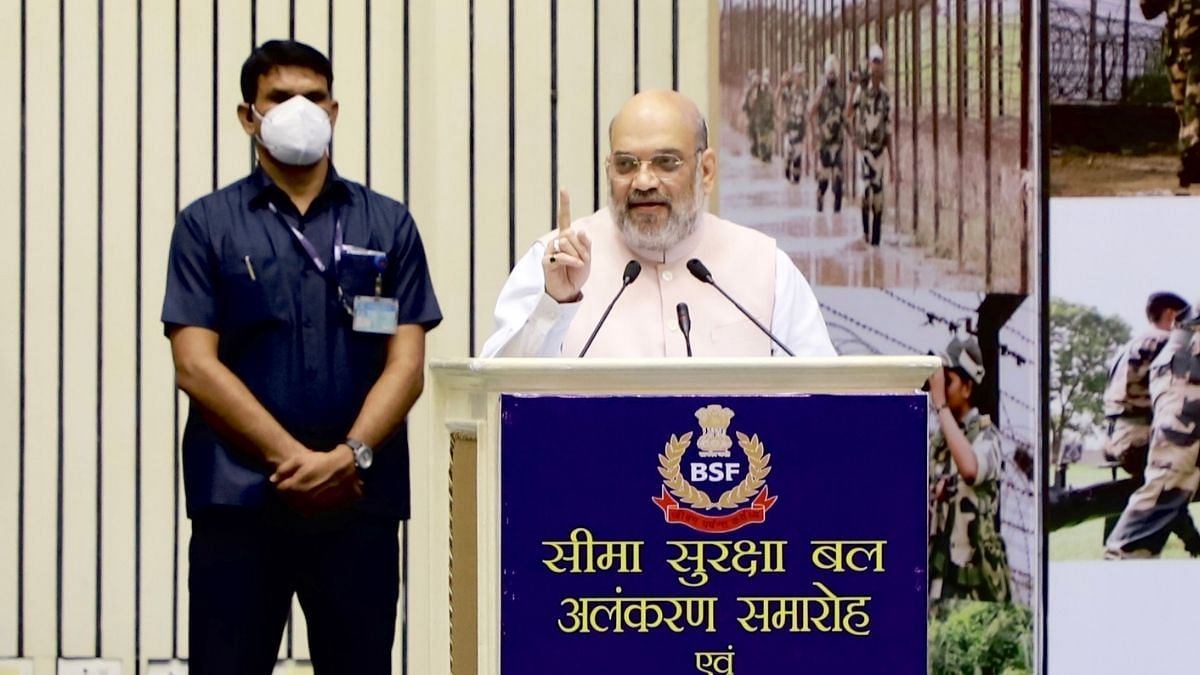 
New Delhi: Union Home Minister Amit Shah Saturday asserted that unfenced gaps along India’s over 7,500-km-long land border will be sealed before 2022, thus covering areas that lead to infiltration and smuggling of arms and narcotics.

He also asserted that India’s security policy was either “influenced or was overlapping” with the foreign policy and it was only after Narendra Modi became prime minister that the country got an independent security strategy.

An officer of the 1938 batch of the British-era Imperial Police, Rustamji headed the 1965 raised force for nine years. He died in 2003.

Shah also gave away gallantry medals to the serving personnel and to the family members of those who were killed in the line of duty from the country’s largest frontier force.

Shah said about three per cent of the unfenced area leaves a “big gap” and makes the border vulnerable for infiltration of terrorists and other border crimes like smuggling of arms, ammunition and narcotics among others.

India has fenced borders with Pakistan and Bangladesh and there are certain areas including the riverines ones which are not fenced.

The Modi government has been plugging these gaps after resolving administrative obstacles and even by talking to neighbouring countries, he said.

“I believe that (ensuring) border security is (ensuring) national security,” Shah said adding they are developing a “new model” of the border fence that cannot be cut or broken.

He also spoke about the security policy of the Modi government.

“I used to think if there is a security policy of this country or not? Till Narendra Modi became the prime minister we did not have any independent security policy,” Shah said.

After Modi became prime minister, the country got an independent security policy.

“Our idea is to have peaceful relations with all but if someone disturbs our borders, if someone challenges our sovereignty, the priority of our security policy is that such an attempt will be replied in the same language,” Shah said.

He said this security policy was a “big achievement” as the country wanted such a good plan.

“I believe without this (security policy) neither the country can progress nor democracy can prosper,” the home minister said.

“Modiji (PM) has done this big job. I do not want to give examples as it is well known,” he said adding the policy was made operational on the ground by his government.

Shah said India was working to soon develop an indigenous counter-drone technology, which is being carried out by technical organisations like the DRDO and some other agencies.

His comments came in the backdrop of the first-ever drone attack on the IAF station in Jammu last month where two unmanned aerial vehicles dropped bombs injuring two airmen and damaging a portion of a building inside.

He added that the security establishment of the country is preparing a long-drawn project to thwart artificial intelligence and robotic technology enabled attacks from across the borders.

Shah gave out figures to showcase how the Modi government worked to enhance and fortify border security.

Also read: Why Amit Shah fights a losing election from the front

While one border tunnel for transportation was made earlier, six tunnels have been made by the Modi government in the last one year while 19 such structures are in the pipeline, Shah said.

Similarly, a total of 170 km of border roads were resurfaced during 2008-14 and it was enhanced to 380 km after the Modi government came to power.

The cutting and formatting of roads along the China border has now been enhanced to 470 km per year as compared to the earlier 230 km per year.

Shah said the government has sanctioned 32 more border roads measuring about 683 km for the Sino-India frontier.

“The prime minister believes that till border infrastructure is upgraded and strengthened the security forces will not be able to do their job properly.”

“The PM has said that if border infrastructure is not proper the local population will continue to migrate from these areas and this will make our borders unsafe,” he said.

The home minister stressed that forces like the BSF should take steps to ensure that border population is provided all basic amenities and that they do not migrate to other area because of these issues.

The officers of these forces should execute “out of routine” thinking and plan so that we are two steps ahead of the adversary, he said.

He asked them to maintain “regular touch” with their troops, resolve their problems and also take feedback from them.

BSF DG Rakesh Asthana said during the event that the force has made 61 drone sightings and unearthed 4 tunnels along the western front in the last one year.

The about 2.65 lakh personnel strong BSF guards over 6,300 km of Indian fronts with Pakistan and Bangladesh on the east.