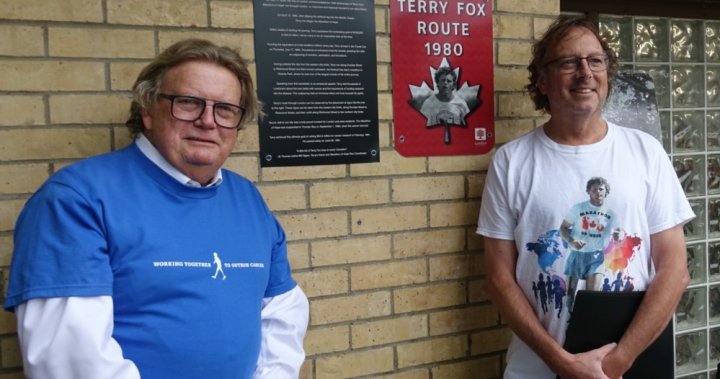 A plaque commemorating the 40th anniversary of Terry Fox‘s Marathon of Hope was unveiled at Victoria Park Saturday morning.

Although 2020 marked the official 40th anniversary of Fox’s arrival in London, a formal unveiling of the plaque was unable to take place due to COVID-19.

The City of London and Terry Fox Run London were able to unveil the plaque this year on the 41st anniversary as a reminder of Fox’s fight to end cancer through his historical run.

“I met Terry and my memories of him are vivid,” said Mayor Ed Holder. “He was fiercely passionate and deeply caring… We want Terry to know we will continue his battle until cancer is conquered.”

The plaque is located at the south side of the Victoria Park bandshell.

Running the equivalent of a 42-kilometre marathon every day, Fox arrived in London on July 17, 1980. Thousands of people lined the streets to greet him and cheer him on.

“When Londoners pass by the signs installed across Terry’s London route as well as (the) plaque, they will be reminded of his greatness,” the mayor said.

Having entered London from the eastern city limits, Fox ran along Dundas Street to Richmond Street and then turned northward. He completed that day’s marathon in Victoria Park, where he saw one of the largest crowds of his entire journey.

“Since Terry’s historic run through London 41 years ago, almost $10 million has been raised city-wide in London for cancer research in the annual Terry Fox Runs held in his memory,” said Pete Ferguson of Terry Fox Run London.

“Terry’s legacy continues to connect us, and the street signage and plaque are a small gesture of appreciation for Terry, his legacy, his foundation and all the volunteers and participants of the Terry Fox Run.”