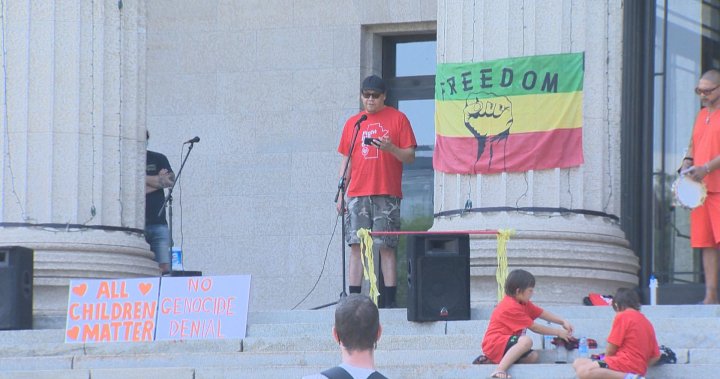 A group originally formed to protest Manitoba’s education reform — Bill 64 — took to the front of the Legislative Building in Winnipeg on Saturday morning to call for the resignation of the province’s new minister of Indigenous reconciliation and northern relations.

Alan Lagimodiere faced widespread backlash this week after defending some of the intentions behind residential schools only minutes after being sworn in.

He issued a statement later in the day walking back the comments, saying he “misspoke,” and issued a full apology Friday afternoon.

Dozens attended the ProtectEdMB rally wearing orange and red clothing, where some gave speeches atop the stairs overlooking the grounds where a statue of Queen Victoria was torn down July 1.

Many of those gathered on the steps displayed flags and signs directed at Pallister’s government, one reading, “PC’s need an education. No to Bill 64. Racists out.”

ProtectEdMB said in a news release Friday their campaign goal was to “address the provincial government’s pattern of denying the truth that residential schools were always a policy of genocide brutally enacted on Indigenous peoples for the purpose of land dominion and resource extraction.”

“We are concerned that Bill 64 will further embed multiple forms of denial about these schools, their logic, their intent, and their effects in Manitoba’s education system,” the news release continued. “Together, these failures threaten to add significant barriers on education’s responsibility in truth and reconciliation.”

The group is calling for Lagimodiere to resign and said in their news release that they believe Pallister should follow suit based on similar comments he’s made about residential schools.

Last week, the premier faced heat for saying, “The people who came here to this country, before it was a country and since, didn’t come here to destroy anything. They came here to build. They came to build better.”