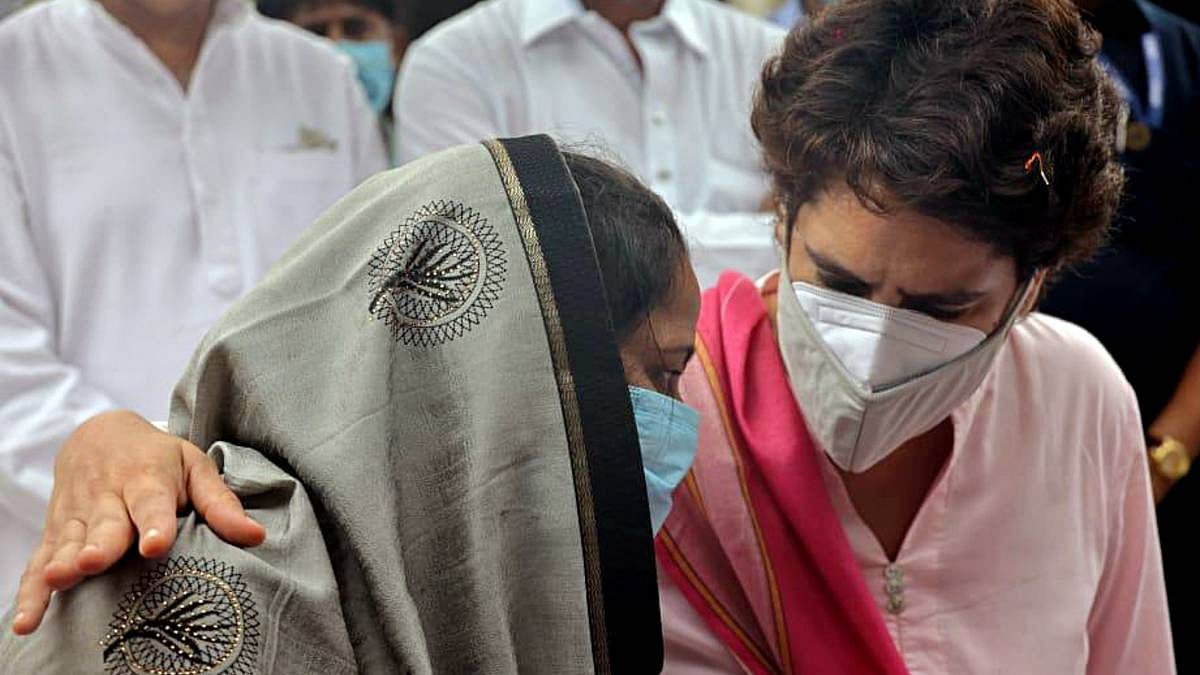 Gandhi told the media she had come to show her solidarity and to raise the issue of crime against women in the state. Alleging that the Yogi Adityanath government in UP was a ‘mahila virodhi sarkar’ (a government against women), she added, “This is a fight for democracy. And the situation has become such wherein a woman went to file her nomination papers, and she was beaten up. This is not democracy … I came to meet the women, they are my sisters, and I want to tell (them) that each and every woman of India stands with them. I told them not to feel afraid, and have confidence.”

However, the visit caught people’s attention in political circles since both the women are from a rival party — the Samajwadi Party (SP).

UP Congress chief Ajay Lallu dismissed the visit as being politically significant. “It’s not a political visit … she even tweeted about the violence (when it) happened during the block pramukh election. Priyanka ji always comes in support of women power. Mahila ka samman aur nyay ki ladai hai, issey party se jod kar nahi dekha jana chaiaye (this is a fight for women’s respect and justice, do not mix this with party issues),” Lallu told ThePrint.

Is Congress angling for SP alliance?

A Congress functionary, who asked to remain unnamed, said the visit could be a pressure tactic by the Congress to forge an alliance with the Akhilesh Yadav’s SP.

“It’s a pressure tactic. Maybe the party is thinking of going into alliance with SP again. In the end, both parties do not want BJP to come into power again. On the other hand, Mayawati has been exposed for her soft corner towards BJP. So it’s high time the rest of the opposition come together. If not an alliance, then some kind of ‘understanding’ should be done before the elections,” the party leader said.

A source close to the office of Priyanka Gandhi also told ThePrint that an alliance is not entirely impossible.

“One can’t rule out the possibility of an alliance with SP in this election also, but it’s too early to say. First, Congress should prove itself as a threat to SP’s vote bank … then maybe Akhilesh will think of an alliance.”

Drawing a comparison with Akhilesh Yadav, a senior UP Congress leader said, “Priyanka’s visit is a lesson for Akhilesh Yadav on how to stand with their own workers. What Priyanka ji did, Akhilesh should have done earlier … Priyanka Gandhi always showed a big heart and courage to raise everyone’s voice, and that’s what other opposition leaders miss. They can’t counter the BJP government like Priyanka and Rahul do.”

However, Surendra Rajpoot, the UP Congress spokesperson, said the party intended to contest all the assembly seats on its own. “We are planning to contest all 403 seats on our own. Priyanka ji always raises the voice of women. We should see this Lakhimpur visit above political lines. She always comes in support of women of any party. Her visit is to support other women in politics and raise the issue of violence during block pramukh elections (only).”

The Samajwadi Party has so far played matters close to its chest.

MLC Rajpal Kashyap told ThePrint, “Maybe it’s a personal visit (for Priyanka Gandhi). I do not want to comment on it, but the Samajwadi Party is fighting against BJP. Our workers were beaten and women were harassed during panchayat polls. Priyanka Gandhi can visit anyone’s house, it’s her choice but it does not mean any kind of alliance or understanding.”

He added that “our national president has already clarified his position … no major force or national party will be adjusted in the alliance”.

Another SP leader told ThePrint that while Congress could try any number of tactics, “it’s already clear that there is a fight between BJP and SP”.

“We have nothing against Priayanka Gandhi, but we do not want anyone to get highlights from such visits. Scenario of the UP election is already clear. We do not care what these (Congress) people are doing. Congress leaders should first meet their own party workers,” he said, adding that Yadav had already met with the two women who were allegedly assaulted. “SP high command always stands for their workers.”

Also read: Can 2024 become more challenging for Modi? Yes, but it’s all up to Congress

Gandhi is currently on a three-day visit to Lucknow, her first to the party’s state headquarters in the last 18 months. She started her visit Friday with a silent protest against the ruling BJP government before a Mahatma Gandhi statue. She then went to the party’s headquarters where she met several farmer union members and presidents of district and city Congress units. She is now likely to meet all the office bearers of all the party’s units, such as  Youth Congress, NSUI, Mahila Congress and Seva Dal.

A senior party functionary said, “This visit is an indication of starting of our Mission 2022 campaign. After meeting several office bearers here, she will soon start her visits to districts where she will meet and address block level workers. Most probably, she will start her campaign visit from any district of Eastern UP.”

The party expects Gandhi will extend her stay for a while, he added.

Also read: ‘Khela Hoi’: SP’s UP poll prep is all about songs & slogans — some original, some ‘inspired’