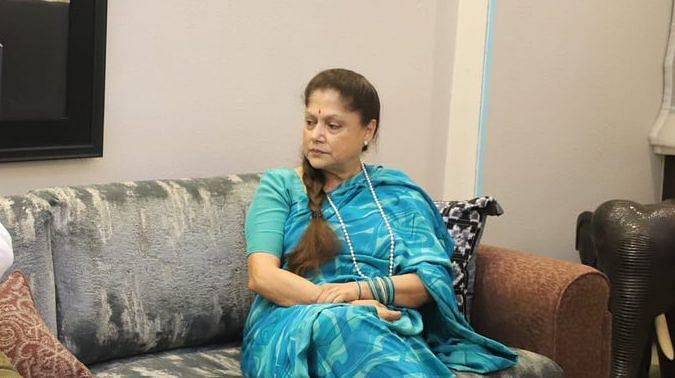 
New Delhi: Newly-inducted Union minister Jyotiraditya Scindia is making friends in his new home of BJP with warmth and good rapport, even within affiliate organisations like the ABVP and RSS. But his aunt and long-time BJP leader Yashodhara Raje Scindia is not winning any friends in the Shivraj Singh Chouhan cabinet.

This month, the Minister of Sports and Technical Education in Madhya Pradesh has had fights with three of her cabinet colleagues, which included an incident that happened in the presence of the chief minister.

The latest incident came this week during a cabinet meeting when Yashodhara fought with Forest Minister Vijay Shah and Cooperative Minister Arvind Singh Bhadoria over a trivial issue, according to sources.

“Yashodhara became angry with Vijay Shah as his kurta pyjama was not in order. She said, ‘two women are sitting behind you, you should be dressed properly’,” said a source.

Bhadoria entered this conversation and told Shah that he should be careful as “she is maharaja (royal) and you are praja (subject)”.

Yashodhara got agitated over this remark and asked Bhadoria to “mind your language, you are insulting me”. She asked him to not stare at her and left the meeting. She returned after a few minutes when Medical Education Minister Biswas Sarang mediated between the ministers.

Display of anger in front of CM

Earlier this month, Yashodhara Raje Scindia scolded another minister during a cabinet meeting.

Power Minister Pradhuman Singh Tomar was making a presentation on electricity subsidies to farmers in the state and was advocating a reduction. Many of the ministers, including Yashodhara, were in disagreement with the proposal, raising the issue of inflated bills. Tomar’s reply to this didn’t satisfy them.

According to sources, Yashodhara then asked Tomar, “You have not mentioned the efficiency of your department. How will you reduce its deficit?”

Referring to an incident last month when Tomar climbed a high-tension electricity pole to clean it, Yashodhara quipped, “You will not solve the problem by climbing poles.”

Tomar asked her to allow him to complete first, but continued to make the presentation with one eye on the minister. This angered Yashodhara, who rebuked Tomar and asked, “Do you want to intimidate me?” The CM then interjected and told Tomar to also discuss the functioning of his ministry.

ThePrint reached Yashodhara for a comment via calls but there was no response until the time of publishing this report.

Tomar told ThePrint that it is an internal matter of the cabinet, adding that in a family various issues are discussed, but “we can’t comment outside”. Bhadoria also made the same point in his comment.

‘Frustration of not having good portfolio’

According to a cabinet minister in the MP government, “The problem with Yashodhara ji is she thinks she is still a royal and we are her subjects. Her sense of monarchy persists. She is senior, but you can’t make fun of other ministers.”

Yashodhara targeted Tomar, who is a loyalist of Jyotiraditya Scindia. The ex-Congress leader had crossed over to BJP in 2020, along with Scindia. Yashodhara’s battle with Tomar is old, because he is an MLA from the same Gwalior region where she contests from.

“She is one of the senior ministers but her frustration is that she doesn’t get good ministries despite being the daughter of ‘Rajmata’ (Vijaya Raje Scindia) while junior cabinet ministers are getting plum portfolios. As Tomar is handling energy, and Bhadoria, a first-time minister, has the cooperative portfolio, she loses her temper,” said a second cabinet member who didn’t wish to be named.

“In another meeting, she had a tussle with another minister on illegal mining in the Gwalior-Chambal region in the presence of CM,” said the second minister, adding that Chouhan doesn’t have a smooth relationship with Yashodhara but as captain of the ship, he has to listen and accommodate every one view point.

Before the 2018 assembly elections, Yashodhara had made news for boycotting a BJP election meeting when she saw that there was no photo of Rajmata at the dias even as pictures of Syama Prasad Mookerjee, Deen Dayal Upadhyay, Atal Bihari Vajpayee and others.

Her journey in the BJP has not been so smooth. While ex-CM Uma Bharati tried to corner her during her tenure a couple of decades ago, Chouhan too has given her lightweight departments.