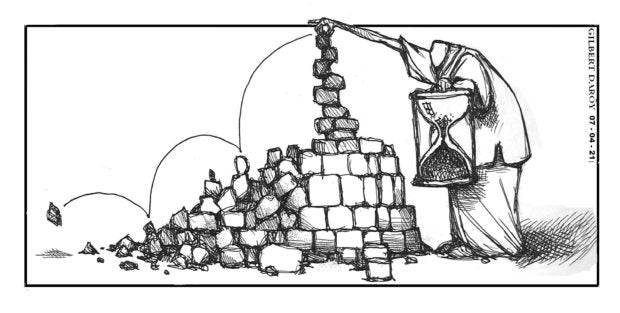 In June 2017, a month into the fighting between Islamic State-inspired extremists and government forces in Marawi, President Duterte made a promise: “I will see to it that Marawi will rise as a prosperous city again.”

Four years since the five-month-long battle ended leaving structures in ruins, hundreds dead, and about 300,000 individuals forced to flee, that promise remains largely unfulfilled. Worse, the much-heralded multibillion rehabilitation has been riddled with delays and alleged irregularities, at the expense of the Maranao folk.

What rubs salt into the wounds of the thousands of displaced and homeless Maranao are reports that the government has prioritized constructing a sports stadium and a convention centerʍthe P199.9-million Sarimanok Sports Stadium whose groundbreaking was held last May, and the P180-million Marawi Convention Center. Local leaders have slammed these projects, especially with some 90,000 of the 300,000 displaced residents still living in squalid conditions elsewhere.

The slow reconstruction efforts, as well as land disputes, have deterred the residents’ return to their devastated city to begin rebuilding their lives. This week, a group of Marawi residents accused the government of sequestering without their consent at least 16 hectares of their land in four villages inside “ground zero.” The move affects some 11,000 individuals who claim they were not even notified about the sequestration. “That’s land grabbing. It’s private land and we have titles and documents. There was no consultation made,” lawyer Ibrahim Mimbalawag, one of the affected landowners and representative of the group, said.

They were later told by the TFBM that rehabilitation projects such as a convention center, grand “padian” (market), and promenade, among others, will be constructed in the four villages. “Why would anyone think of constructing these when thousands are still homeless?” MCG’s Lininding asked.

The TFBM defended these planned structures as part of the bigger rehabilitation plan, noting that they cannot just focus on housing alone. However, as Dimapuno Alonto Datu-Ramos Jr., the director of the Bureau of External Relations of the National Commission on Muslim Filipinos, wrote in a Facebook post: “There is a question about the immediate need for such structures. If you weigh the need for housing, the logic in the decision-making becomes questionable.”

Local leaders also questioned the involvement of the National Housing Authority, which awarded the two projects, when the construction of a stadium and a convention center is outside the agency’s mandate. The NHA had been tagged earlier in the awarding of a P2-billion public works contract to a Pampanga-based contractor that was blacklisted in 2018 and did not have any experience in debris-clearing. Norodin Alonto Lucman, former deputy governor of the now defunct Autonomous Region in Muslim Mindanao, said they had brought these issues to the attention of President Duterte, but no action has been taken.

According to a Philippine Center for Investigative Journalism report last month, beyond the concerns for housing, many Marawi residents feel they have been largely excluded from the government’s rehabilitation plans, which have been too focused on infrastructure and not on their well-being and the provision of basic services such as education and health, as well as helping them find stable sources of income. Displaced folk have been waiting for lawmakers to pass the Marawi compensation bill, which will provide monetary compensation for the destruction of their residential houses and properties; the bill has been languishing in both the Senate and the House of Representatives. The President also ignored the Marawi rehabilitation bill in his State of the Nation Address last year.

In 2017, Mr. Duterte said: “I will rebuild Marawi because if not, I will remain forever the villain.” He has less than a year to go before his promise becomes a self-fulfilling prophecy.