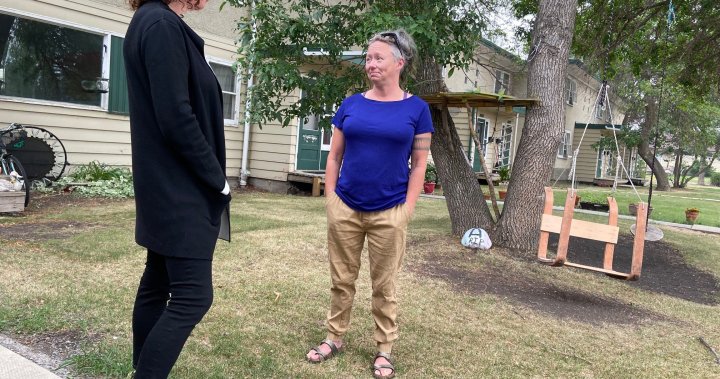 Some North Glenora residents in northwest Edmonton are frustrated over new housing developments.

They believe the change will potentially force several families to leave the area, transforming the neighbourhood.

“Everybody is a little bit nervous about it, I think, there’s a lot of long-term residents here,” Patio Homes tenant Tanya French said.

French has rented the townhouse she lives in for nearly 12 years, but a proposed rezoning change would see her current building transformed into a new 40-plus apartment complex.

It has her questioning her future living situation.

“It means we’d have to move out of the area, I think, for sure, because these units are pretty reasonable in rent and they accept pets and are family-friendly,” French said.

Crystal Oko lives in a single-family home near the buildings and is one of many North Glenora residents hoping the future development won’t force families to leave the neighbourhood.

So far, one re-zoning application has been approved — the other three go to public hearing August 31.

“Low-income rental housing for families that was built into this neighbourhood so that we can have a vibrant, mixed community, is being replaced with apartment buildings that have one and two-bedroom units and are not suitable to families,” Oko said.

Oko said she wants the developer to add units with more bedrooms.

“The one development that has been permitted by the city does not have any three-bedroom units, so I don’t see how that would be considered family-friendly,” Oko said.

But the developer said the units will be family-friendly with a more functional layout.

“We want to maintain the tenant mix we have, we want to ensure it’s affordable to bring back to tenants we do have. We’ve built about 1,500 units across Edmonton over the past decade, very few have been three-bedroom units and we’ve had a lot of families in our projects in our developments,” Chief Operating Officer of Regency Developments Raj Dhunna said.

Dhunna said the developments will happen in stages to accommodate tenants who wish to move into the new buildings.

As for Oko, she said she hopes this change won’t force families to leave and impact the local school that at one time was struggling with low enrolment.