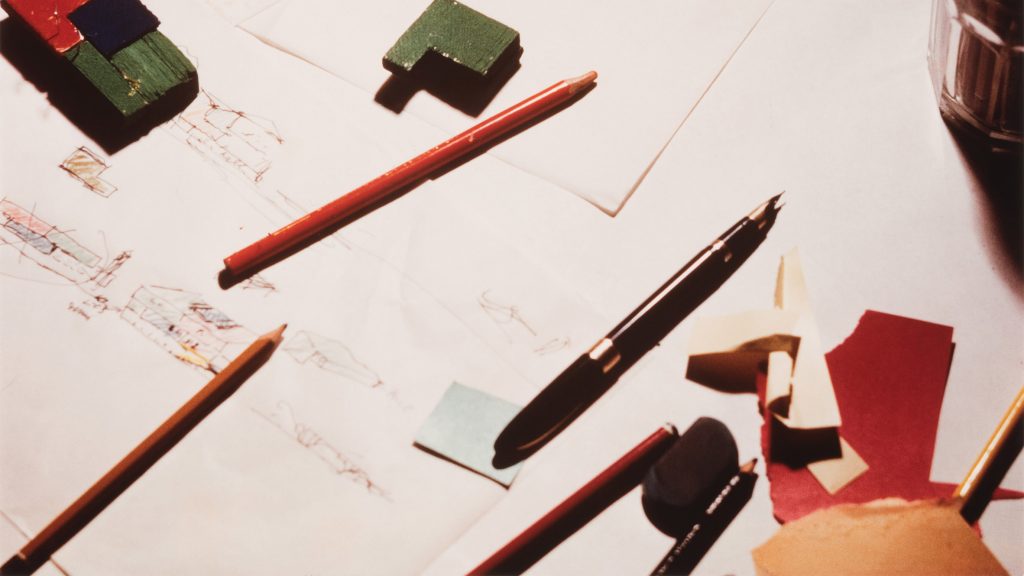 It’s time for summer breaks, jobs and heatwaves. What better way to relax than with a short, self-reflexive exercise: take the word “design” away and try to describe it otherwise? You have pen and paper and lemonade, about an hour to write and fifty words to play with. All words are in – only “design” is out. It’s a timely exercise and perhaps never more so than now that design had been buried under a pile of rhetorical nonsense.

Since the financial crisis of 2007-2008, since rolling housing bubbles, climate crises and pandemic waves, design and architecture have changed beyond recognition. Old production modes and scripts no longer hold, and perhaps that’s why the exercise is popular now. For the last few years, I’ve been testing it with art, design and architecture students in Canada, as well as Maryland Institute College of Art and Harvard University’s Graduate School of Design.

Sometimes the exercise is explicit and sometimes it happens in conversation or reviews. Either way: remove the word “design” and the first thing you notice is that the alternative words help clarify things. Right away. Many “graphic designers” are graphic artists while others are corporate branding agents, which are two different things. Many “design thinkers” behave like neoliberal business consultants, while many “urban designers” and planners do the same.

One student of “environmental design” did the exercise and pictured herself as something else altogether: a “road scribbler” or painter of lines on streets for city councils. She imagined herself leading an effort to expand citizen consulting, public transit and cycling infrastructure, not mass urban privatization.

There is no single definition of design – there is a range

Removing design, even if only for a moment, helped students better understand themselves – their roots, interests and ambitions – as well as the titles in design books, festivals and awards. Even museums. Removing design helped expand and refine design as the art of the everyday.

There is no single definition of design – there is a range. Everything social, political and technological is designed. Designed to fail. Drawn to perfection. Shaped. Sculpted. Planned. Intended. I get that. But there’s also a growing number of design monikers that do nothing but confuse, hide or embellish what’s at stake.

Right now, the thing I like least about using “designer” or “design thinker” to describe anything and everything is that it puts a warm, positive or art-like veneer on the work of anti-democratic business consultants, adtech engineers and influencers.

If you do influencer campaigns for corporate brands on Facebook, you are an influencer or an advertiser. You work in the service of advertising strategies, you employ novel advertising tactics like lifestyle influencing, and you build brands and user profiles on advertising platforms.

Calling yourself a “content designer” or a “digital creator” might make you feel better, but as researcher Sophie Bishop writes, it also plays into Facebook’s hand. There’s a reason why Facebook’s Instagram has a Creators tab. When the platforms of private firms look like friendly venues for artists and designers, it generates positive public relations for the firms and helps deflect well-deserved criticism.

Sometimes the word “design” makes perfect sense. If students couldn’t find better terms for describing what they did, I encouraged them to go back to design, to work with it, to figure out what it meant to be an artist in the everyday. I’d encourage them to make “design” their own, to join like-minded communities they could believe in and grow with.

I have an unproven theory that the confusion around design in part explains why the Design Exchange in Toronto – the DX – was hard for many to understand and value. It was Canada’s only design museum, but when it closed in 2019, no one seemed to care. No government stepped in to save it and there was hardly any comment in the press.

Images of design are so widely disseminated now that it’s easy to forget that some societies don’t value design much at all. An entire design museum goes down and Canadians hardly make a sound. Why? What are we to make of this? Remove “Design”, as the exercise requires, and we’re left with something that explains a lot: a Luxury Marketing Exchange.

Or, at least, that’s what the museum had become in the last decade of its life. My knowledge of the DX was limited to 2012 to 2016, which I did not value; and anyway, I wasn’t alone. I met countless people who for decades attended openings and galas with a lot of hope in their hearts but left disappointed. Not all guests, but many. People who worked in small studios. Presidents of large firms. Art curators. Fashion editors. Book critics.

From its launch as a non-profit in 1994, the DX had worked with a variety of fascinating curators, artists, designers and architects – from Noa Bernstein to Lynne Cohen, Jeremy Laing, Lateral Office and Department of Unusual Certainties.

But in its later years, the museum’s lease and fiscal reality became tense and it started promoting mediocre talent too, as long as it came with wealthy sponsors or family fortunes. It introduced more and more programming that positioned luxury as a “high-end” price and platitude, not as a creature of time or technique, style or sensitivity to concept, craft or context.

The museum was dedicated to the cultural and economic promotion of design but now preferred the latter. It started chasing after “high-profile” traveling shows from “prestigious” institutions. It positioned design as a private good – not a public good or field worthy of broad social concern. It exhibited luxury couture, shoes and toys, mandatory optimism, individual happiness and stars like Christian Louboutin, Stefan Sagmeister, Pharrel Williams and Vivienne Westwood.

The DX tried to employ history to reflect on the twentieth century. It had a stellar collection of postwar products curated by Dr Rachel Gotlieb, but she got little support and did her own fundraising.

The museum seemed preoccupied with turn-of-the-century talking points and products by figures like Stefan Sagmeister, Bruce Mau and Karim Rashid. It privileged mandatory positivity but missed the interesting tensions of the times. It wanted triumphs and bubbles but no crashes. It paid some attention to 3D printing but failed to understand “smart” cities, digital surveillance, emotion recognition and the challenges they posed to democracy. And for that reason, the museum felt dated. Out of touch.

The museum seemed popular but was obvious and expected. It was cliché: popularity was conflated with safety in stars, design with luxury brands and products. Attendance grew and sponsors were numerous, but budgeting and planning were in constant crisis. Many visitors left disappointed and a larger public never got on board.

Some say the DX lacked vision, that it lacked a unifying vision as a museum and that explains the hits and misses, the complex audiences, programmes and exhibition aesthetics. I saw its vision: luxury marketing. It didn’t work.

Design sometimes operates in luxury circles, but when a non-profit with a broad mandate positions design as “high-end,” it suffers. On March 20, 2019, the DX shut down as a museum by deaccessioning its permanent collection. Too few cared about luxury marketing and the shutter was met with silence.

The Canadian minister of heritage didn’t save the museum. The Ontario minister of tourism and culture didn’t blink and neither did the City of Toronto. Canadian newspapers had no design critics – not one – so there was hardly any news or analysis. Art and architecture media, for its part, parroted the DX’s press release: its “pivot to a festival strategy.”

The Design Exchange wasn’t about “Design” as the art of the everyday. It was so positive and happy it hurt

There was one meaningful opinion by curator Brendan Cormier in The Globe and Mail. Cormier is Canadian, but lives in London and works as curator at the Victoria & Albert Museum.

“This is deeply troubling,” he wrote. “While the Design Exchange has long struggled to assert itself as a major museum of importance in the country, its move away from museum status is nevertheless a major loss. Canada will now become one of the only advanced economies in the world not to have its own design museum.”

Indeed, the museum struggled, its closure was met with silence, and the luxury positioning had something to do with it.

The Design Exchange wasn’t about “Design” as the art of the everyday. It was so positive and happy it hurt. It was so glamorous and prestigious that it grew in attendance but alienated a larger public. It was a space for all kinds of things, a Luxury Marketing Club, Corporate Venue Rental and Valet Parking, but design wasn’t one of them.

Michèle Champagne is a researcher and graphic artist. She writes about mandatory positivity, the happiness industry, emotion recognition and “smart” cities for Back Office, C Magazine, Failed Architecture and Volume. Trained at Sandberg Instituut in Amsterdam, she lived in Toronto and calls Montréal home.