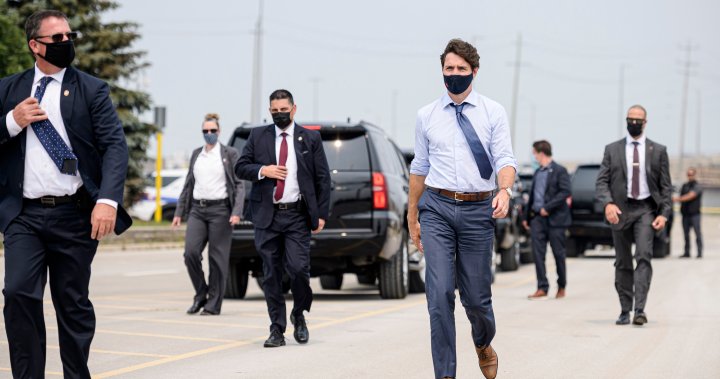 Prime Minister Justin Trudeau says he isn’t angry that no one told him about a 2018 allegation of inappropriate behaviour made against now-retired Gen. Jonathan Vance, the former chief of the defence staff.

In an exclusive interview with Global News, Trudeau spoke with Global Toronto anchor Farah Nasser in Brampton and defended his decision to keep Defence Minister Harjit Sajjan in the portfolio despite recent calls for his removal and questions over his handling of the military sexual misconduct crisis.

Trudeau then said Sajjan did not know what the 2018 allegation was and said questions from journalists about why Sajjan did not inform him or follow up on the matter were only sharing “half of the story.”

“Are you angry that you didn’t know about these allegations?” Nasser asked.

“Or to tell you?” Nasser asked. “I mean, these are serious allegations and they could lead to serious charges. You’re his boss.”

“Did the minister know what those allegations were?” Trudeau responded.

“I don’t know what the minister knew,” Nasser said.

“The minister has said many times he didn’t know what those allegations were,” Trudeau said. He added that everyone serving in the Canadian military deserves to be treated with respect.

“I believe that, the minister believes that, Canadians believe that. At the same time, he took the steps necessary so when the media latches on to this as you are —”

Nasser interjected to inform Trudeau it is not simply journalists who raised questions about Sajjan’s handling of the crisis but survivors and victims of military sexual misconduct themselves.

“Yes, the victims and survivors have been very clear and we are working with them,” Trudeau said. “But when you say things like, ‘Why didn’t the minister tell you,’ and then you say you can’t even tell me what the minister said because the minister didn’t know things, you’re actually sharing half of the story.”

Trudeau did not mention that Sajjan has testified he did not permit the military ombudsman who tried to share the allegation with him in March 2018 to do so.

“He did not give me any details. I did not allow him to give me any details,” said Sajjan during testimony before the House of Commons defence committee on March 12, 2021. He has said he believed hearing the allegation would’ve amounted to “political interference” — a claim rejected by the head of the Canadian Forces National Investigation Service in subsequent testimony of his own.

Global News reported on Feb. 2, 2021, that Vance is facing allegations of inappropriate behaviour with two female subordinates, which he denies.

Military police opened an investigation into the allegations against Vance on Feb. 3, one day after Global News reported on them. Since then, allegations have been levied against multiple senior leaders of the Canadian Forces in what experts have described as an institutional crisis for the military.

Vance was charged last week with one count of obstruction of justice under the Criminal Code.

Military police laid that charge then handed the case over to the civilian court system over concerns about what the Department of Defence described as the “limitations” of the military justice system.

That military justice system has repeatedly come under criticism during parliamentary studies into sexual misconduct in the military. On March 3, 2021, one of the committees heard testimony from Gary Walbourne, the former military ombudsman, who said he tried in March 2018 to give Sajjan evidence regarding an allegation against Vance that dated back to 2012.

“I did tell the minister what the allegation was. I reached into my pocket to show him the evidence I was holding. He pushed back from the table and said, ‘No,’” Walbourne testified.

“The minister didn’t want to see the evidence.”

1:35
Trudeau faces questions on why Harjit Sajjan hasn’t been asked to step aside following testimony against Gen. Vance

Trudeau faces questions on why Harjit Sajjan hasn’t been asked to step aside following testimony against Gen. Vance – Apr 23, 2021

Other officials within Trudeau’s office, including his chief of staff Katie Telford, have testified they were also aware of the existence of an allegation against Vance in 2018, but did not know any specifics and believed bureaucrats were handling the matter. Those bureaucrats later abandoned the probe.

“The concept of Ministerial accountability has been absent.”

Stephen Saideman, the Paterson chair in international affairs at Carleton University, told the Canadian Press last month that Sajjan has lost credibility and sought to cast off blame throughout the crisis.

“The way he’s responded to it has been typical: Everything that’s happened under his watch is not his fault,” Saideman said. “So whether that’s what’s going on in the chief of defence’s office or what’s going on in his own district office, things happen, he’s not responsible.”

The 2018 allegation shared with the ombudsman’s office had been made informally but was in regards to an email sent from Vance’s military account in 2012 which suggested to a much younger woman in the military that they go to a clothing-optional vacation destination.

Vance has said he has no recollection of sending that and would be willing to apologize if he did.

IN HER WORDS: The woman behind 2018 Vance allegation tells her story

In an interview with Global News on April 21, the woman who brought that complaint to the ombudsman in 2018 said she did so hoping that Sajjan would weigh the allegation as he considered the future of Operation Honour — the military’s effort to root out sexual misconduct — and Vance himself.

“My intent was never to make this public or widely known. It was for the minister to deal with at an appropriate time and perhaps reconsider how Operation Honour was commanded,” she said.

“And when the time for decisions about, you know, extension of mandate for the chief of defence staff or future roles, that this could be factored into that decision making.”

Vance remained in the role as chief of the defence staff until January 2021.

An external review led by former Supreme Court of Canada justice Louise Arbour is underway now and tasked with providing recommendations to the government on how to create an independent reporting structure for military sexual misconduct, which is currently handled within the chain of command.

The final report of that isn’t due until next year and it remains unclear when any interim reports could be issued or when the government will take action to begin creating that system — a key recommendation from the landmark 2015 report documenting the extent of military sexual misconduct.