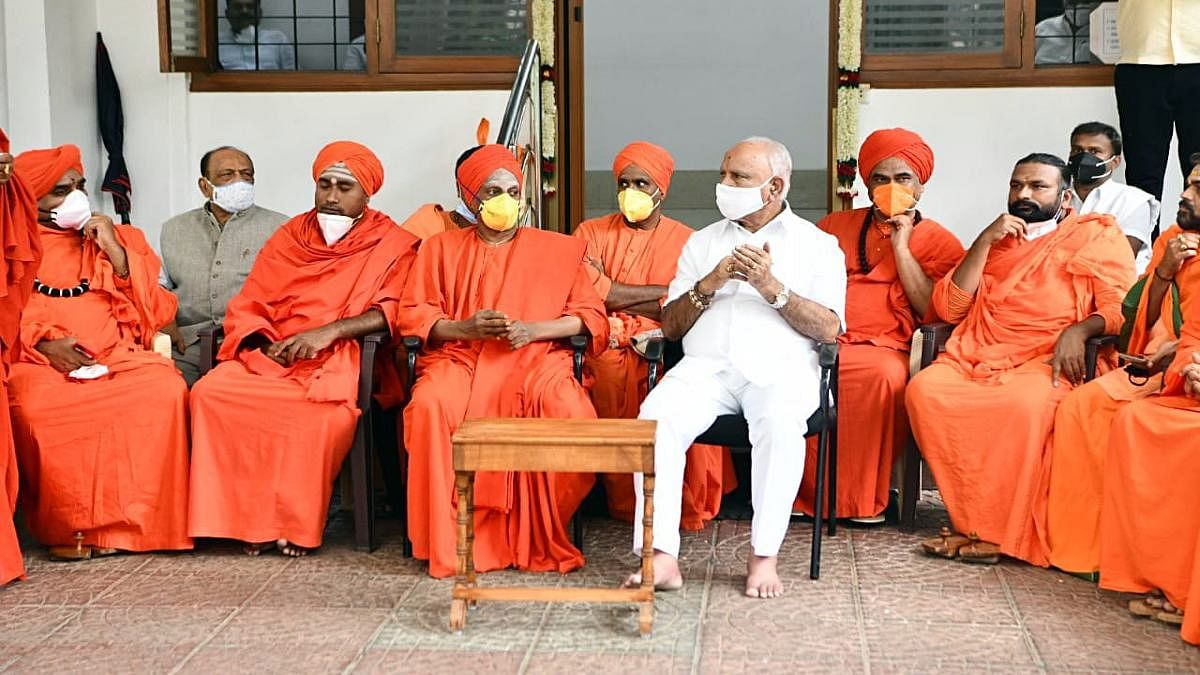 
New Delhi: Karnataka Chief Minister B.S. Yediyurappa, 78, Wednesday held what appeared to be a show of strength with seers of the Lingayat community, among others, days after his meeting with Prime Minister Narendra Modi in New Delhi sparked rumours of a change in leadership in the southern state.

Several seers of the Lingayat community, which comprises 16 per cent of the state’s population and is known to impact 100 of its 224 assembly seats, had also expressed support for Yediyurappa’s continuation as CM Tuesday.

On Wednesday, over three dozen seers, mainly from the Lingayat community, met the chief minister — a Lingayat himself — at his official residence in Bengaluru with some of them raising slogans in his favour.

The delegation was led by Siddalinga Swamy of the Siddaganga Mutt, considered one of the most powerful mutts in the state.

Speaking to the media later, he said: “It is not a Lingayat fight. Yediyurappa is a Karnataka leader. He has done well. Why should he go? We want him to continue till the next assembly elections due in April 2023.”

Yediyurappa is credited with helping the BJP form a base in Karnataka, the only state in the south where the party has been in office.

However, he is believed to have fallen out of favour with the BJP leadership over the past few years, including over what is seen as his unilateral functioning. Allegations of corruption and nepotism from within the BJP have further hurt his cause, and the party is also believed to be looking to bring in a “generational shift”.

While Arun Singh, the BJP’s Karnataka in-charge, said last month that there was no question of a change in leadership in the state, sources say the central leadership has told the chief minister that he needs to step down.

The show of strength, said a BJP leader, is being viewed as an indirect message to the central leadership.

“The seers have also now sent a message to the BJP high command and its ideological mentor, the Rashtriya Swayamsevak Sangh, that asking him to step down would not be taken kindly and will have repercussions,” the BJP leader added.

“Lingayat seers as well as heads of Lingayat organisations have warned that the party high command should be prepared to face consequences if Yediyurappa is removed. Yediyurappa has also started holding frequent meetings with MLAs to strengthen his position.”

Meanwhile, BJP MP Subramanian Swamy took to Twitter Wednesday to say removing Yediyurappa may prove a mistake, pointing to the CM’s brief departure from the party in 2013, when the Congress ended up winning the state polls.

It was Yeddiruppa who first brought BJP to power in Karnataka. Some conspired to remove him since he would not be a chamcha. Without Him BJP could not return power in the State. Only upon his return to BJP could the party win again. Why repeat the same mistake?

Also Read: This round to dislodge Karnataka CM Yediyurappa fails, but dissidents not ready to bow

Talking about the central government’s alleged directive to Yediyurappa, popularly known as BSY, a second BJP leader said “unlike in other states, he has been told to take his time and decide on the exit plan”.

“The issue has been discussed several times but the central leadership is of the view that the time is right now. Whether the chief minister will accept it easily is something difficult to ascertain at this point of time,” said the senior BJP leader.

Added a third leader, “The central leadership has made it clear that he needs to step down. But with this show of strength, Yediyurappa is looking to increase his bargaining power so that his successor is from his choice and from his community. He is also looking at ensuring a good deal for his son.”

According to BJP leaders, it is to quash speculation about Yediyurappa’s resignation — it is rumoured that he may quit within the month — that a dinner and meeting with legislators planned for 25 and 26 July have been cancelled.

The date 26 July marks the second anniversary of the BJP government, and the CM had announced a meeting of the legislative party on that day.

“There is no legislative party meeting scheduled for 26 July. Some districts are facing floods so it was also felt that the get-together should also be cancelled. The get-together will now take place later,” said a senior BJP leader from Karnataka.

“As far as the issue of replacing him is concerned, that can only happen once he resigns. This is an issue that the central leadership and the CM have to take.”

While the anti-Yediyurappa camp is believed to be working actively to replace him, finding a replacement for a mass leader like BSY, who has immense control over the numerically, economically and politically strong Lingayat community, will be a difficult challenge for the BJP.

“The central leadership is quite sure that there is a need to bring in a generational shift in leadership though without disturbing the core Lingayat community votebank. Many names are being considered but a final decision is yet to be taken,” said another BJP leader.

Also Read: Yediyurappa doesn’t want to see it, but Modi and Shah have sent the signal for Karnataka