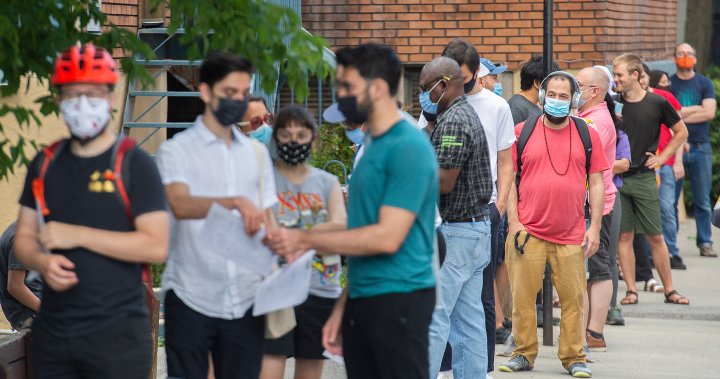 Quebec saw an uptick in infections with 103 new cases linked to the COVID-19 health crisis on Wednesday, but reported no additional deaths.

The latest daily tally is an increase of 27 compared with the previous day, when authorities recorded 76 cases.

Health Minister Christian Dubé commented on the increase on social media, saying the province is still aiming to fully vaccinate at least 75 per cent of Quebecers aged 12 and older by Aug. 31.

The government has unveiled a vaccination passport system for September, which could bar those who are adequately immunized from accessing non-essential services — but only if there is a spike in cases or outbreaks.

“We are seeing it everywhere else: a fourth wave will hit the unvaccinated and their loved ones first,” he wrote on Twitter. “The clock is ticking to get your first dose.”

READ MORE: Vermonters excited to reunite with family and friends with border set to reopen

The number of pandemic-related hospitalizations dropped on Wednesday by five to 72. This includes 21 people in intensive care units, which remained unchanged from the previous day.

The novel coronavirus vaccination rollout saw an additional 100,819 shots administered since the last update. Over the course of the campaign, more than 10.2 million doses have been given.

Quebec received 76,050 doses of the Pfizer vaccine on Tuesday, which brings this week’s expected shipment to a close. More than 700,000 doses were delivered in total.

Health officials say 14,885 tests were conducted Monday, the latest day for which screening data is available.

The province has seen a total of 376,519 infections and the health crisis has killed 11,235 Quebecers. The death toll was changed Wednesday following an investigation, however, to remove a death previously attributed to the virus.

Since the beginning of the pandemic, 364,594 recoveries have been recorded.