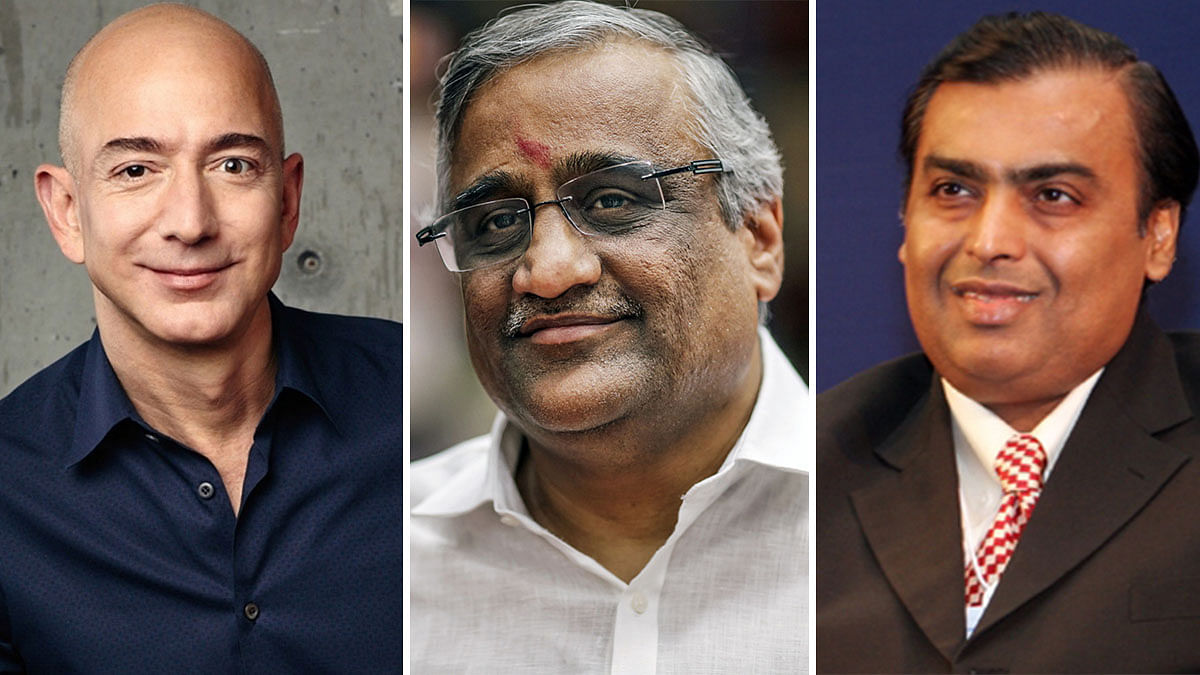 
New Delhi: Amazon told the Supreme Court on Thursday that the Biyanis of Future Group had negotiated with it to enter into certain agreements and are bound by Singapore’s Emergency Arbitrator (EA) award restraining its Future Retail Ltd (FRL) from going ahead with its merger deal with Reliance Retail.

The US-based e-commerce giant reiterated before a bench of justices R F Nariman and B R Gavai that the EA award of Singapore International Arbitration Centre (SIAC), restraining FRL from the Rs 24,713 crore deal with Reliance Retail, is an enforceable award.

Kishore Biyani and 15 others including FRL and Future Coupon Pvt Ltd have been made parties by Amazon in a batch of pleas challenging the Delhi High Court order of the division bench which paved the way for the deal.

There is rank dishonesty and commercial immorality in this case. You induce people to enter into agreements, then you breach these agreements. When it comes to the Emergency Arbitrator, you do not plead on merits, Chinoy said, adding that there has been wilful and mala fide breach of agreements by FRL and its office bearers.

Prior to him, senior advocate Gopal Subramanium argued for Amazon and said that the EA had rightly held the group of companies doctrine is applicable in the case and a Future group company cannot take the plea that the award was not enforceable as it was not party to the arbitral proceedings or the agreements.

He also referred to judgements on arbitration and said that the EA award was enforceable against FRL and others.

Senior advocate Harish Salve, appearing for the Future group, commenced the arguments and touched on the issue of enforceability of an award by EA and said the recommendation of the Law Commission on this has not been accepted or acted upon so far by Parliament.

He said that if a show cause notice is issued in relation to an arbitral award asking a person as to why he should not be sent to jail then it certainly becomes appealable order pertaining to right to life and liberty under Article 21 of the Constitution.

Salve would recommence his submissions on July 27.

On Tuesday, Subramanium, appearing for Amazon.com NV Investment Holdings LLC, had apprised the apex court of the facts and legal proceedings in the case and said the EA was enforceable and the single-judge bench of the Delhi High Court rightly gave an interim order in its favour granting a stay on the amalgamation.

He had said the division bench of the high court erred in entertaining Future group’s appeal and granting it relief by paving the way for the deal.

Assailing the order, he had said, The emergency arbitrator (EA) is not a coram non judice’ (not before a judge) and hence the award of EA is enforceable and the high court under a provision of the Arbitration and Conciliation Act has to act to execute it and not sit in appeal against the interim award.

On February 22, in its interim order the apex court had asked the National Company Law Tribunal (NCLT) not to pass the final order related regulatory approvals for the amalgamation.

Amazon moved the top court against the order of the Delhi High Court division bench which paved the way for the Reliance-FRL deal.

On February 8, the division bench had stayed the single-judge direction to FRL and various statutory authorities to maintain the status quo on the mega deal.

The interim direction was passed on FRL’s appeal challenging the February 2 order of the single judge.

In August last year, the Future group had reached an agreement to sell its retail, wholesale, logistics, and warehousing units to Reliance.

Subsequently, Amazon took FRL into EA before the SIAC over alleged breach of contract by the Future group.

Amazon had first filed a plea before the high court (single judge) for enforcement of the October 25, 2020, EA award by SIAC restraining FRL from going ahead with the deal with Reliance Retail.

The high court division bench had however said that it was staying the single-judge order as FRL was not a party to the share subscription agreement (SSA) between Amazon and Future Coupons Pvt Ltd (FCPL) and the US e-commerce giant was not a party to the deal for amalgamation between FRL and Reliance Retail.

It had also said that its observations were only prima facie and the single judge ought not to be influenced by them when pronouncing the order on Amazon’s plea for enforcement of the EA award by SIAC restraining FRL from going ahead with the deal.

FRL, in its appeal, had claimed that if the February 2 order was not stayed it would be an absolute disaster for it as the proceedings before the NCLT for approving the amalgamation scheme have been put on hold.

It had contended that the single judge’s status quo order will effectively derail the entire scheme which has been approved by statutory authorities in accordance with the law.

In its suit before the single judge for enforcing the EA award, Amazon has sought to restrain FRL from taking any steps to complete the transaction with entities that are part of the Mukesh Dhirubhai Ambani (MDA) Group.

Amazon has also sought detention of the Biyanis, directors of FCPL and FRL and other related parties in civil prison and attaching of their properties for alleged wilful disobedience of the EA order.

After the SIAC’s EA order, Amazon wrote to the Securities and Exchange Board of India (Sebi), stock exchanges and CCI, urging them to take into consideration the arbitrator’s interim decision as it is a binding order.

FRL thereafter moved the high court to restrain Amazon from writing to Sebi, CCI, and other regulators about SIAC’s order, saying it amounts to interfering with the agreement with Reliance.

A single judge on December 21 last year had on FRL’s plea passed an interim order allowing Amazon to write to the statutory authorities, but also observed that prima facie it appeared the US e-commerce giant’s attempt to control Future Retail was violative of FEMA and FDI rules.

Against the observation, Amazon moved an appeal before a division bench and during its pendency, it filed the suit for the enforcement of the EA award.

Also read: How the Ambani vs Amazon spat is testing India’s attraction for foreign investors