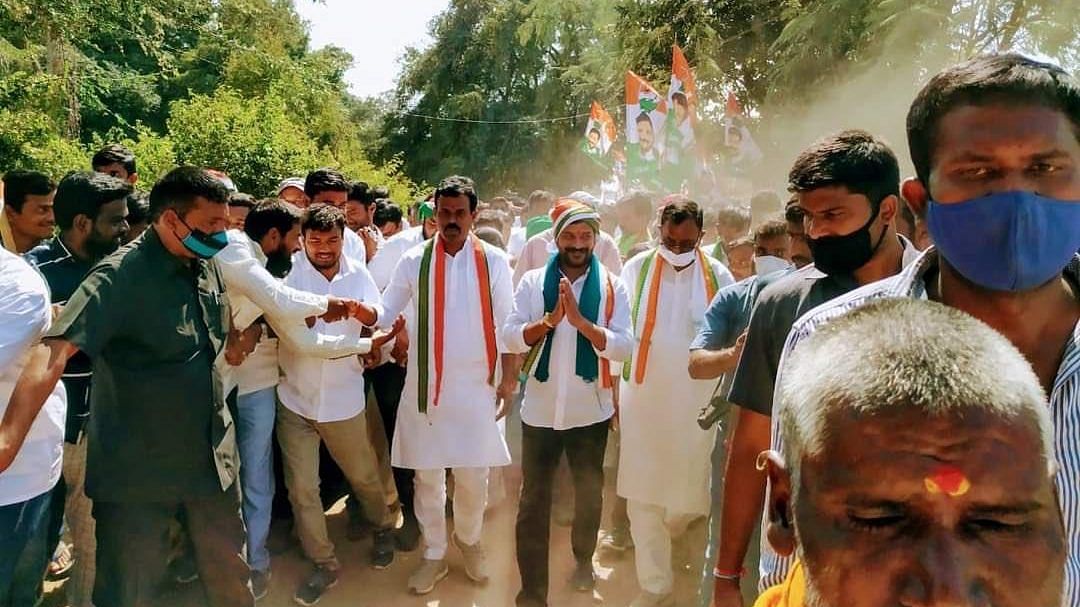 
Hyderabad: It’s the season of padayatras in Telangana, even though assembly elections are scheduled for 2023.

State BJP chief Bandi Sanjay has announced that in August he will embark on a 750-km trek from Hyderabad to Huzurabad, a constituency that is up for a bypoll in the state. Dates, however, are yet to be announced.

The seat was once held by Chief Minister K. Chandrashekar Rao’s close aide and ousted Minister Eatala Rajender, who joined the BJP in June.

Rajender himself is on a 270 km-long padayatra, which he began Monday from Kamalapur Mandal in Warangal district.

Not one to be left behind, newly-appointed Congress chief Revanth Reddy has hinted at a padayatra in the coming months. The 53-year-old Reddy had completed a 140-km walkathon in February, in solidarity with farmers protesting the farm laws in Delhi.

Then there is Y.S. Sharmila, daughter of former CM, the late Y.S. Rajasekhara Reddy (YSR), and sister of Andhra Pradesh Chief Minister Y.S. Jagan Mohan Reddy. Sharmila, who launched her YSR Telangana Party only on 8 July, has also announced a padayatra in the state.

She is, however, not new to padayatras. She undertook one such journey in 2012 when her brother Jagan Reddy was in jail in a disproportionate assets case.

And it is her father, YSR, who first showed that the padayatras can be harnessed for political capital in the Telugu states.

In 2003, YSR embarked on a 1,500-km journey for almost 60 days in undivided Andhra Pradesh. The padayatra helped him unseat then Chief Minister Chandrababu Naidu in the 2004 assembly elections.

Since then, the padayatra — mega walkathons with the hope of a better connect with people on the ground — has become a tool for Opposition politicians looking to revive or launch careers in both states.

But nearly two decades on, experts argue that it may no longer hold the allure it once did.

Analysts say two things work against the padayatra — social media and a glut of these walkathons.

“With at least two or more opposition leaders showing an inclination to undertake padayatra in Telangana, there is a high risk of causing a clutter in the minds of people,” political analyst Palwai Raghavendra Reddy told ThePrint.

“And unless these leaders create an indelible mark, these efforts might not yield desired results,” Reddy added.

“It is important for Revanth Reddy or Bandi Sanjay or any other leader wishing to reach the ultimate goal of becoming CM of Telangana to ensure they create and sustain a huge momentum in media, social media, and through word of mouth publicity of this padayatra until the next elections in 2023,” he said.

Senior political observer Suresh Alapati said none of the current leaders possess the aura of YSR.

“We cannot compare today’s opposition leaders’ yatras to YSR’s time. He had a different charm and showmanship, which these leaders do not,” Alapati said. “Revanth Reddy, to an extent, has that aura but again he has his own drawbacks and cases, etc.

“The impact cannot be the same because political factors are different — Bandi Sanjay is not the leader that Modi is to the party. Similarly, in Revanth’s case, the Congress leadership takes centrestage. Let’s talk after Sharmila’s party even takes shape in Telangana,” he added.

How padayatra became a game-changer in Telugu politics

Andhra Pradesh has had a history of padayatras helping opposition leaders climb to power.

It was the late YSR who set the ball rolling on this front. His 2003 padayatra helped him get farmers, upset with Chandrababu Naidu’s policies, to back the Congress.

Naidu was then facing accusations of ignoring farmers while developing Hyderabad into an IT hub.

Such was YSR’s campaign, that he managed to retain power in 2009.

It even prompted Naidu, facing a backlash of being inaccessible to people on the ground, to undertake a 2,800-km padayatra in 2012 when he was almost 63 years old. He then won the 2014 assembly polls.

And almost over 14 years later, YSR’s son, Y.S. Jagan Mohan Reddy, embarked on a 3,648 km padayatra starting in 2017. In 341 days, he reportedly met 2 crore people on the ground and stormed to power in Andhra Pradesh in the 2019 assembly elections.

“Padayatras are powerful events spread over days. For instance, if you go in a chopper to a certain location, it would be a minutes-long event. But if you walk the same distance, it would take days,” senior political analyst Prof Nageshwar Rao said.

“The main asset of a padayatra is its slow speed, because of which it will attract the media and help leaders to stay in news — so it is a strong political weapon.

“And, of course, when you meet people in person, there will be an emotional connection with them; it will help leaders to stay relevant among people,” he added.

Alapati too said that padayatras are a powerful political tool but added that certain factors also play their role. He pointed out that during YSR’s time, there was strong anti-incumbency against the then Naidu government and that when Naidu undertook a padayatra, the Andhra/Telangana sentiment played a role.

He added that when Jagan embarked on his journey, Naidu was facing dissent. Jagan, he said, promised welfare schemes, had the YSR factor, and had Prashant Kishor’s team promoting him on social media.

“Padayatras are still a powerful tool. People will be happy that leaders have come to their homes all the way from Hyderabad,” he added. “But I don’t think any of these leaders will see the same impact as what YSR or others saw. Although there is growing dissent for TRS, they might manage to just scrape through.”

Also read: Two Telugu states, one river — why Andhra & Telangana are fighting it out over the Krishna