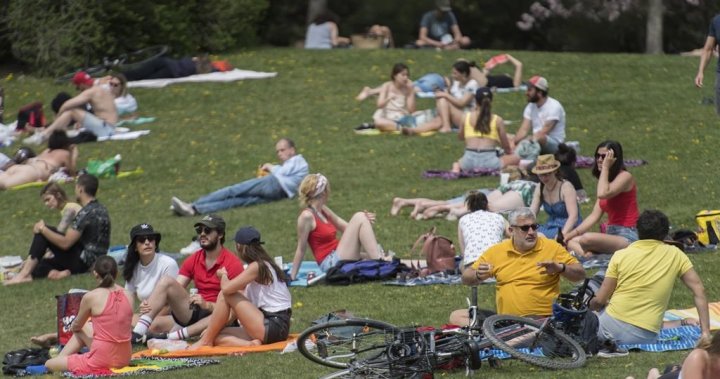 For city dwellers with little or no green space, parks became a lifeline during the height of the COVID pandemic — a place to exercise and socialize safely.

“I think it’s a shift in the culture,” said Montréal teacher Mathieu Martel, who says he uses parks every day.

“People like more to talk in the park and various activities, like in Jarry Park … I think it will be a new space for socializing.”

The 2021 Canadian City Parks Report shows that people’s appreciation for parks has grown exponentially during the pandemic, particularly for mental health (85 per cent), physical health (81 per cent), and social connection (71 per cent).

The survey was conducted in April by non-profit organization Park People, which advocates for parks across Canada.

It showed that people used their local parks not only in the summer — with 94 per cent of cities recording an increase — but half of respondents said they also went during the winter.

The majority said they plan to continue to use parks as much or even more.

“It has enhanced realities that we were already aware of … and realizing how they [parks] were important,” said Caroline Magar, Québec development manager for Park People.

The report shows that the increased use also highlighted some issues, including the equity gap.

For example, Canadians who identified as Black or from other racialized communities were more likely to report they experienced barriers to park use during the pandemic because they were afraid of getting harassed (22 per cent) or ticketed by police (24 per cent).

It also showed a lack of maintenance or infrastructure such as bathrooms.

People want these and other issues to change: about two-thirds of respondents said they would like to see increased funding for parks.

“I think so, because people like to gather around parks and socialize … and I think it’s a good thing to invest in parks and green spaces too,” said Martel.

Read more:
Coronavirus: Is it risky to hang out with friends in a park in Montreal?

Park People suggest the survey’s findings can be a useful tool to create policy.

“To recognize and to start to see parks more than just equipment and physical infrastructure, but also social infrastructure,” said Magar. “Investing and starting to collaborate more with other departments like public health, like culture and sports and open the conversation.”

Magar says that given the importance people are putting on parks, they could end up becoming a driving political issue during the upcoming municipal election in November.

4:07
How Montrealers have embraced parks during the pandemic

How Montrealers have embraced parks during the pandemic – Aug 18, 2020