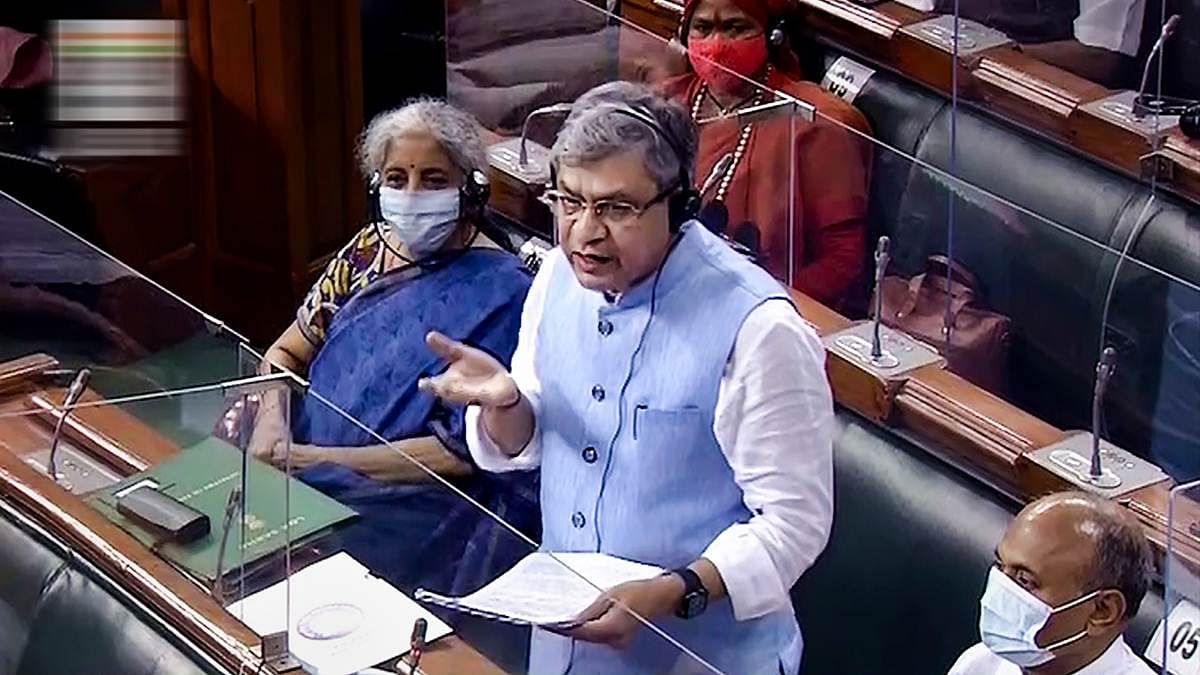 
New Delhi: A Trinamool Congress (TMC) MP snatched papers from Communications and Information Technology Minister Ashwini Vaishnaw in the Rajya Sabha on Thursday and tore those as the minister was about to make a statement on the alleged snooping row using Israeli spyware Pegasus.

TMC, Congress and other opposition party members, who had earlier forced two adjournments of the proceedings in the Rajya Sabha, rushed into the well of the House as Vaishnaw was called to make a statement on the issue.

TMC MP Shantanu Sen snatched the papers from the hands of the minister, tore and flung those in the air.

This stopped the minister in his steps from making the statement and he said he was laying a copy of it on the table of the House.

Deputy Chairman Harivansh asked the members to desist from unparliamentary behaviour, before adjourning the proceedings of the House for the day.

“Please do not adhere to this unparliamentary practice,” Harivansh said, adding that the report that all MPs want to hear has now been laid on the table of the House and it can be discussed.

He called the minister to read his statement and Vaishnaw read out a few sentences before the ruckus drowned his voice and he said he was laying the statement on the table of the House.

“You do not want a discussion on an issue you have been agitated about…this is undemocratic,” the deputy chairman remarked.

He said the minister has laid the statement on the table of the House and asked if the MPs want to ask him any questions on that.

But the opposition MPs continued to raise slogans against the alleged snooping controversy.

In the ruckus, the deputy chairman sought laying of the parliamentary committee reports that could not be laid at the scheduled hour in the morning due to opposition protests.

Soon after, he adjourned the proceedings for the day.

The statement that the minister laid on the table of the House was similar to the one he had made on July 19, a day after reports appeared of journalists, political rivals and critics of the government being targeted through surveillance using Israeli company NSO Group’s Pegasus spyware.

In the statement, Vaishnaw, whose phone number was among those listed as compromised by Washington Post, called the reports an “attempt to malign the Indian democracy and its well-established institutions”.

“A highly sensational story was published by a web portal last night. Many over-the-top allegations made around this story,” he said. “The press reports appeared a day before the monsoon session of Parliament. This can’t be a coincidence.”

“In the past, similar claims were made regarding the use of Pegasus…. Those claims had no factual basis and were categorically denied by all parties,” he added.

Amid the ruckus, Vaishnaw implored all members of the House to “examine the issue on facts and logic”.

The phone numbers of Congress leader Rahul Gandhi, former election commissioner Ashok Lavasa and others were said to be the potential targets of surveillance using the Pegasus spyware, which allows clients to infiltrate phones and monitor text messages, camera feeds and microphones.

Earlier in the day, opposition MPs stalled the proceedings in the Upper House of Parliament, forcing two adjournments.

The proceedings were first adjourned for an hour till 12 noon and then till 2 pm — all within minutes.

Congress leader Digvijaya Singh tried to raise the issues of income-tax raids on newspaper group Dainik Bhaskar, but was disallowed by the chair.

Also read: The NSO Group behind Pegasus list & its murky past — from Mexico to Jamal Khashoggi to India