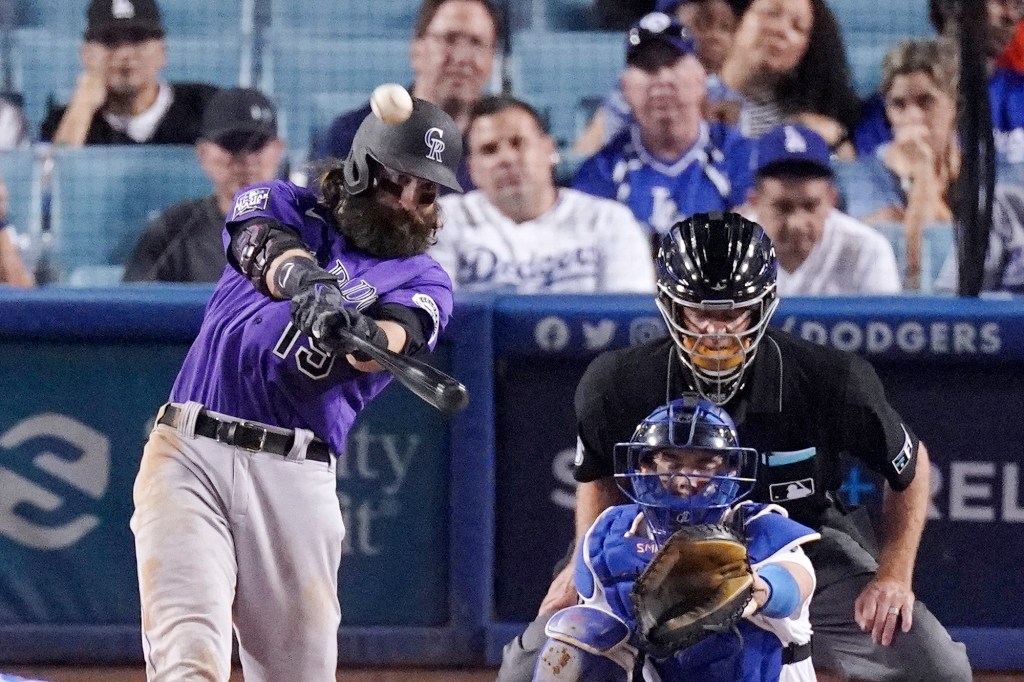 From the Rockies’ point of view, their 9-6, 10-inning win over the Dodgers Friday night was indescribably delicious.

This was “Cuckoo For Cocoa Puffs” kind of stuff.

For the record, the Rockies scored three runs in the 10th on an RBI single by Trevor Story and a two-run home run from Charlie Blackmon, who blasted a Jimmie Sherfy hanging slider deep into the night.

“That was a win; a great at-bat by Trevor and huge hit by Chuck,” said bench coach Mike Redmond, who was filling in for manager Bud Black for the sixth consecutive game. “That was a total team effort. There was a lot going on tonight. But it was nice to get the win, for sure.”

Colorado’s 10th inning was just part of the story.

Hilliard, who’s spent most of the season at Triple-A Albuquerque, blasted a two-out, pinch-hit, solo home run off of lefty reliever Darien Núñez to give Colorado a 6-5 lead. It was Hilliard’s sixth career homer at Dodger Stadium in 36 plate appearances, which is really something when you consider he has just eight homers at Coors Field in 123 plate appearances.

Oh yes, it was also Hilliard’s first major league hit on the road all season.

But the lead didn’t hold, because Colorado closer Daniel Bard blew the save and nearly had a nuclear meltdown in the bottom of the frame.

Austin Barnes opened the ninth with a single off Bard, followed by another single from Chris Taylor. Bard then gave up a wild pitch and back-to-back walks to Billy McKinney and Justin Turner, the latter forcing in a run to tie the game at 6-all.

But with the bases loaded, Bard suddenly found the lost command of his slider and struck out Will Smith, Sheldon Neuse and AJ Pollock to send the game into extra innings.

“Until the score says the game is over, I just try to keep making pitches and find my way out of it,” Bard said. “I firmly believe that even with the bases located and nobody out, that I can find a way out, with punchout of a groundball where we can turn a double play.

“I was thinking about all of the ways I can get out of it, rather than the alternative.”

Rookie lefty, Lucas Gilbreath, from Legacy High School in Broomfield, shut down the Dodgers in the 10th for his first career save.

The Rockies, who have been so bad on the road this season (10-34), have now won three straight, going back to two consecutive wins on the road at San Diego on July 10-11.

“For me, the big thing is the fact that we won right away in our first road game after a long homestand,” Blackmon said. “That is more indicative of how well we played tonight. It’s really nice to see the type of win where we really score a lot of runs. It wasn’t just (German) Marquez going out there and dominating somebody for eight innings. It was a lot of offense from the Rockies tonight.”

Since July 1, 2018, Colorado had been 3-20 at Chavez Ravine, but the hex didn’t hold Friday night as Colorado took advantage of a wobbling Dodgers bullpen.

Colorado’s offense, which has averaged just 2.8 runs per game on the road, finally sprouted signs of life outhitting L.A. 12-10 with three homers.

Their two-run eighth inning, featuring an RBI double by Blackmon and an RBI single by Ryan McMahon tied the game at 5-all.

It was that kind of night the Rockies, who kept producing mini-rallies.

Facing Dodgers starter David Price, Elias Diaz led off the third with a solo homer, cutting the Dodgers’ lead to 3-1.

In Colorado’s two-run sixth, Story led off with a massive home run to dead center off of Price. Story’s 12th homer of the season was his first since July 1 — a span of 43 at-bats. A walk by Blackmon and back-to-back singles by C.J. Cron and McMahon brought home Blackmon to cut L.A.’s lead to 4-3.

But the Dodgers wasted no time extending the lead to 5-3 in the bottom of the frame. Cody Bellinger, showing hints that he might be busting out of a horrific slump, led off with a triple against reliever Ben Bowden. The lefty committed the cardinal sin of throwing a 0-2 fastball right down the middle. Pollock drove in Bellinger with a single to left.

Toss out the first inning and Rockies right-hander Chi Chi Gonzalez pitched pretty well. From the second inning through the fifth, he allowed just one hit — a leadoff solo homer by Turner in the third — and two base runners.

That first inning, however, was a killer, especially considering that the Dodgers entered the game with a 43-15 record in games in which they score first. L.A. scored three runs, powered by RBI doubles by Smith and Bellinger and an RBI single by Matt Beaty. All three runs came with two outs.

Gonzalez has struggled out of the gate this season, posting a 9.6 ERA in the first inning.​