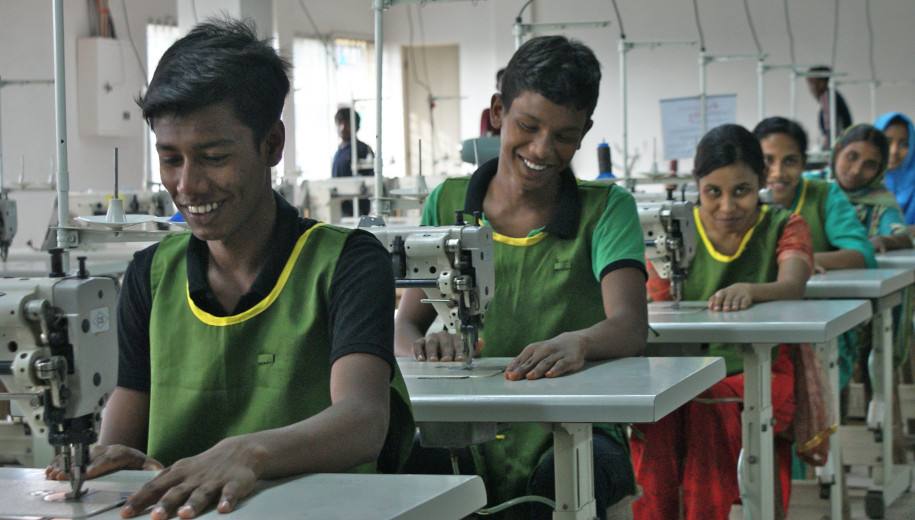 [SYDNEY] Children as young as seven years are working with hazardous chemicals, heavy machinery or carrying heavy loads, endangering their health and lives in Bangladesh’s lucrative leather industry, according to a study.

Globally, about 160 million children were subjected to child labour at the beginning of 2020, with nine million additional children at risk due to the impact of COVID-19, according to UNICEF. Almost half of them were in hazardous work that directly imperils their health and moral development, the UN children’s agency said.

The study, published this month and led by the Institute of Development Studies (IDS), a UK-based international development policy think tank, comes as the world marks 2021 as the International Year for the Elimination of Child Labour.

Researchers found children aged seven to 17 working 12 to 14 hours, six days a week in almost all processes along the leather supply chain – from animal slaughter and skinning to dyeing, waste disposal and manufacturing of leather products and by-products such as glue and meat.

Case studies in the report include that of an eight-year-old girl working in the leather glove manufacturing industry. She had to cut leather pieces using sharp equipment and soften them with her feet in the milling process. In another case, two tannery workers aged 16- to 17 sustained severe burns when the barrel of hydrochloric acid they were carrying from the shop to the tannery broke open.

“The leather supply chain is highly complex as are the reasons why children engage in the most dangerous forms of labour,” says A.K.M. Maksud, the study’s lead author and executive director at Grambangla Unnayan Committee.

“We found that it is not only employees that are drawing children into the worst forms of child labour, but families running small businesses that depend on cheap labour to sustain their livelihoods.”

“We found that it is not only employees that are drawing children into the worst forms of child labour, but families running small businesses that depend on cheap labour to sustain their livelihoods”

Grambangla Unnayan Committee and ChildHope UK – which are part of  the Child Labour: Action-Research-Innovation in South and South-Eastern Asia (CLARISSA) programme led by IDS ­– conducted the study mostly in Dhaka during May­–August 2020.

On average, children interviewed in the study earned US$90.80 per month and the lowest monthly income was just US$11.80.

“Most of the children said that scolding, threats, and other forms of verbal abuse were very common. Some reported being physically abused by their employers for being slow or making mistakes. But local industry associations insist that their businesses are strictly regulated and that the worst forms of child labour do not exist in their sector,” Maksud adds.

The leather sector is the second largest export industry after readymade garments in Bangladesh. In 2017, the leather industry accounted for 3.5 per cent of the country’s annual exports or US$1.2 billion, according to an Asian Development Bank report. The industry directly or indirectly employs 850,000 workers, the report says.

Danny Burns, CLARISSA programme director says: “We work closely with children because good solutions, which have a positive impact on their lives, need their involvement.

“We will also be running action research groups later this year to explore how to effectively engage small business owners in the informal economy as they are a crucial part of the picture.”

Bangladesh has ratified the International Labour Organisation’s Worst Forms of Child Labour Convention, but it has not ratified the Minimum Age Convention.

Zama Neff, director of the children’s rights division at Human Rights Watch says: “This new report is especially timely –  last year even before the pandemic, child labour surged for the first time in two decades. This doesn’t have to happen.

“Governments should use cash allowances to help families meet their basic needs without sending their children to work. Cash transfers have been successful in many places but 1.3 billion children, mostly in Asia and Africa, aren’t covered.”

Recommendations by Human Rights Watch to Bangladesh’s ministry of labour and employment include rigorously enforcing existing laws, prohibiting hazardous child labour in tanneries, with monitoring and unannounced site inspections, and issuing penalties against employers who violate the law.

“We urge the government to immediately implement an effective removal programme for child labourers in tanneries that provides access to education, including non-formal education and skills development training; alternative income generation opportunities where appropriate and socio-economic empowerment programmes for their families,” adds Neff.

This piece was produced by SciDev.Net’s Asia & Pacific desk.