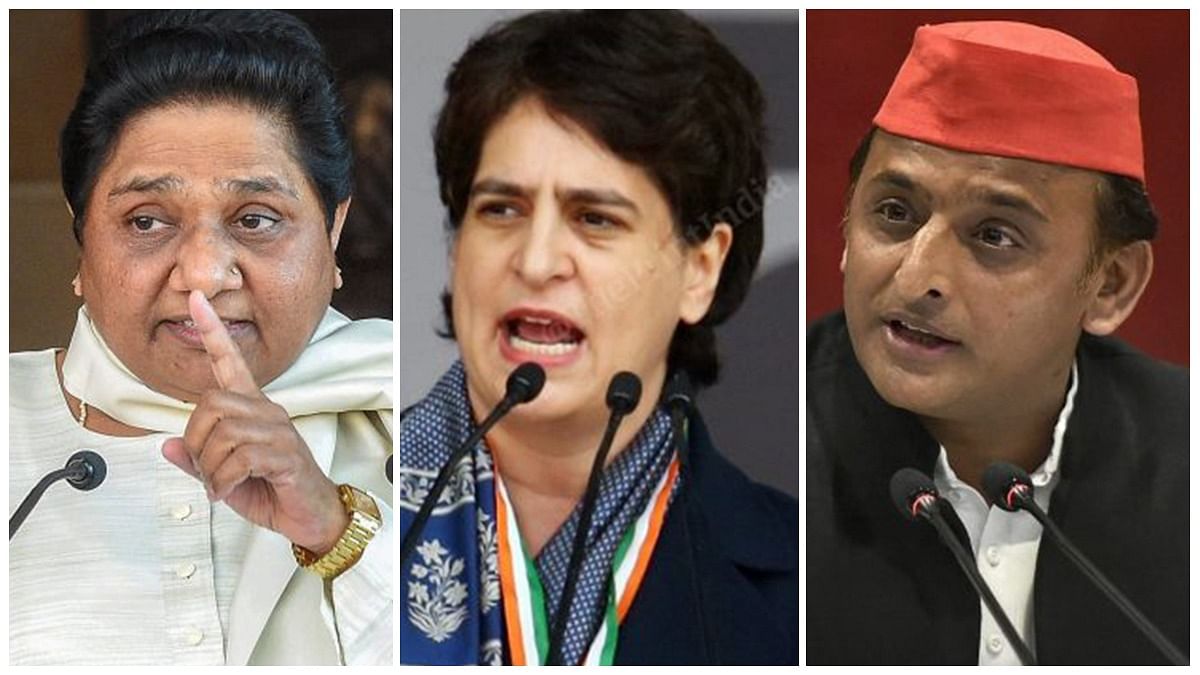 
Lucknow: As political parties prepare for the Uttar Pradesh assembly elections early next year, Congress seems to be eager to have a pre-poll alliance again — particularly with the Samajwadi Party (SP).

In a clear indication of this last week, Congress general secretary Priyanka Gandhi Vadra visited two SP women workers in Lakhimpur, who were allegedly assaulted during the recently-conducted block pramukh election. After the visit, Priyanka said this was a “fight for democracy”, and later added that the party is “open-minded” for an alliance.

Speaking to ThePrint, Congress leaders in the state said an alliance with the party will be helpful for any opposition party — pointing to SP — claiming the Priyanka-led unit is likely to emerge as the “strongest opposition” in UP soon.

However, several leaders from the SP, including party chief Akhilesh Yadav, showed disinterest in an alliance with the Congress, citing the 2017 performance when the two parties fought together and poorly lost. According to them, the Congress is a poor partner, with limited winnability prospects.

To this, some of the Congress’ former lawmakers said a “tactical understanding” would be better, especially in the efforts to unseat the Yogi Adityanath-led Bharatiya Janata Party (BJP).

Also read: In Parliament, Congress shifts gears from Pegasus to farmers with eye on Punjab, UP polls

In a BBC interview last week, SP chief Akhilesh Yadav denied any possibility of an alliance with the Congress. He said “these parties” demand a larger number of seats but win very few, adding that SP will ally only with “smaller parties”.

Sources close to Akhilesh confirmed to ThePrint that there are no talks of an alliance with the Congress. Instead, most of the party leaders want the Congress to fight elections alone on all the seats as they believe it will help the SP strategy.

“There is no chance of alliance with the Congress. Specifically I say, we want Congress to contest on all seats, specially on urban seats, because we feel that they could be ‘vote katua (vote cutter)’ for BJP. They can cut BJP’s upper caste vote on several seats so it would be beneficial for us,” said a senior party leader, who didn’t wish to be named.

“Our vote bank is different from Congress… We won’t repeat our 2017 mistake,” the leader said.

A second leader said Congress is nowhere in UP, having only seven MLAs and one MP. “Their performance in Bihar as an alliance partner was not good and our experience of 2017 is also similar… On several national issues, we can support them but in UP we are not willing to do any alliance,” said the leader.

The SP leader also said the party has alliances with Rashtriya Lok Dal and other smaller units, so “how do we adjust Congress in it”. “Humein apne candidate bhi to ladaane hain (we have to put up our candidates too),” he said, adding that RLD is already demanding more seats in western UP after the farmers protest.

SP MLC Rajpal Kashyap said: “Priyanka’s visit to SP workers’ house was her personal visit, I don’t want to comment on it… Our national president has already clarified his position that SP will do alliance with smaller parties. No major force or national party will be adjusted.”

Even Bahujan Samaj Party (BSP) is disinterested in an alliance with Congress. A senior BSP functionary told ThePrint: “Behenji (Mayawati) has already announced that we will go solo in assembly polls so there is no possibility of any alliance with Congress or any other party. Congress is not strong in UP, we all know.”

The Congress has, however, chalked out a plan to show its strength to SP and BSP.

“In the coming days, you will get to see more tours of Priyanka Gandhi in UP. She will visit several districts and meet party workers. She may visit several farmers’ houses too. As of now some people may be saying Congress is not strong but I am assuring you that we will be the strongest opposition here in the coming days,” said a senior party functionary.

“SP knows very well that we can damage their vote banks. During the anti-CAA-NRC movement, Congress was standing with the victim families. Priyanka Gandhi also met people from the Nishad community. In Sonbhadra, she took a stand for Dalit families,” said the leader.

“In the coming days, you will get to see these SP guys will themselves approach us for alliance or some kind of tactical understanding. We are going to launch a massive election campaign here,” he added.

By ‘tactical understanding’, the party leaders mean a collaboration over choice of candidates on some seats, with the parties willing to sit and talk in an effort to protect each other’s vote base.

Other Congress leaders point out that a “tactical understanding” may be “more beneficial” since an alliance could dishearten the cadre.

“If we go for alliance then our cadre may get disheartened because in 2017 also they had not got a chance to contest as we were part of an alliance and contesting on very few seats. So this time they are preparing to fight elections,” said an east UP-based Congress leader who is preparing for the polls.

A former party MLA told ThePrint: “Some sort of tactical understanding or alliance is necessary, otherwise many of our leaders will leave the party if they feel that they are going to lose this time again. For many of us this is a ‘karo ya maro’ (do or die) election because we lost in the last elections also…”

UP Congress spokesperson Sudhanshu Bajpai said: “To defeat the BJP, we are open to an alliance. We are not closing the door to any possibilities. We have not said that we are planning to do an alliance with SP only. It could be with smaller regional parties also. Our target is to stop the BJP from coming back to power again.”