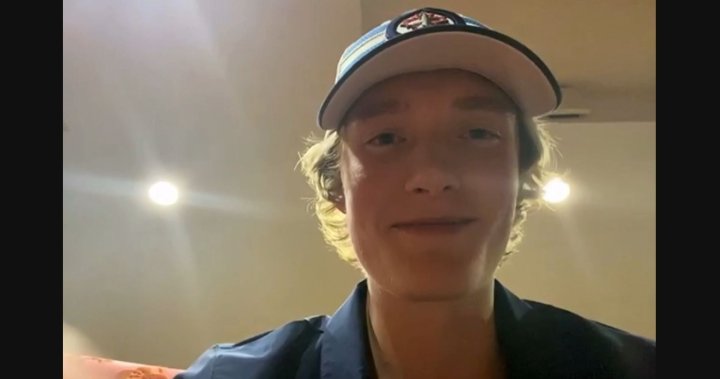 The Winnipeg Jets continued to stock up on centremen with their first round pick in the 2021 NHL Draft.

He dealt with an injury though and only appeared in 12 USHL games for the USNDTP in the pandemic-affected season, but averaged just over a goal per game with 13 goals and five assists.

Lucius was expected to go a little higher in the draft as the 12th ranked North American skater.

“The year itself, certainly I think played into this pick,” Jets general manager Kevin Cheveldayoff said. “He’s had to go through some adversity. he had some injuries that limited the amount of games that he could play.

The Minnesota product racked up 50 points in 46 games the previous season with the U.S. Under-17 squad, and also led the tournament in scoring at the 2020 U17 World Hockey Challenge.

Lucius said he models his game after Jets forward Mark Scheifele and calls him one of his idols.

“If I were to describe my game, I’d say what sticks out the most is my goal-scoring and offensive production,” Lucius said. “I’d say, I’m a good teammate, a good leader, and I do the right thing, and play a good 200-foot game.”

He’ll play for the University of Minnesota Golden Gophers next season, and Winnipeg will be a short drive for friends and family.

“It’s close to home for me, so that’s a plus for sure,” said Lucius. “It’s a really fun team to watch, fast-pace. There’s a really bright future for the Winnipeg Jets and I’m just happy to be a part of it at this point.

“I’m really looking forward to the future of the Winnipeg Jets also. Just a lot of great players on the team already, so I’m hoping to add to that and contribute to one day hopefully win a Stanley Cup.”

He stands at six foot one, and weighs in at 185 pounds.

Ready to roll for Round 1 of the #NHLDraft! pic.twitter.com/K7GPKhPGKv

The Jets also used their first-round draft choice on a centre last year with the selection of Cole Perfetti at 10th overall.

The Jets have just three more selections in the seven-round draft after dealing away their fourth, sixth and seventh-round picks.

Just one Manitoban was taken in the first round with Winnipeg defenceman Carson Lambos going to the Minnesota Wild at 26th overall.

Lambos slipped in the draft. He was the 11th ranked North American skater, but an injury limited him to just two games last season with the WHL’s Winnipeg Ice.

Rounds 2 through 7 of the draft will go on Saturday.