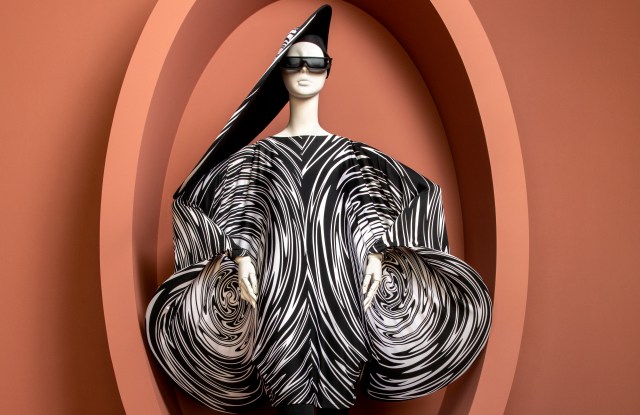 FRIENDS: After a 14-month hiatus due to the coronavirus pandemic, the Savannah College of Art and Design has reopened its location in the village of Lacoste in the Provence region of France, alongside an exhibition about Pierre Cardin, who put the picturesque hamlet on the map with an annual arts festival.

Cardin’s relationship with SCAD began in 2002, when the university acquired a site in the village and renovated a series of historic structures to turn them into a center for the study of art and design. Cardin, who owned properties in Lacoste, including a castle that formerly belonged to the Marquis de Sade, became a mentor to students.

The designer enjoyed a close relationship with SCAD president and founder Paula Wallace and the university. The SCAD FASH Museum of Fashion + Film at its Atlanta outpost hosted the “Pierre Cardin: Pursuit of the Future” retrospective in 2018.

“Cardin unequivocally admired the work of SCAD students. He often remarked on the joy and esprit they brought to Lacoste — and to him, emotionally and artistically. He connected with students across every subject we teach at SCAD, from architecture, furniture design, and painting to fibers, sequential art, illustration and more,” Wallace recalled in a tribute.

Visitors can also stop by the ShopSCAD Lacoste concept store, which carries accessories, apparel, stationery, home decor and gift items by SCAD students, faculty and alumni. In addition, five SCAD artists are showing their work in the university’s medieval caves as part of a residency program.

The Festival de Lacoste is set to run from Aug. 1 to 17. Cardin, who died in December at the age of 98, insisted on maintaining the festival last year, despite COVID-19 restrictions, with appearances by French actor Gérard Depardieu and Italian tenor Andrea Bocelli.

Paris Toasts 70 Years of Pierre Cardin Label — Underwear and All