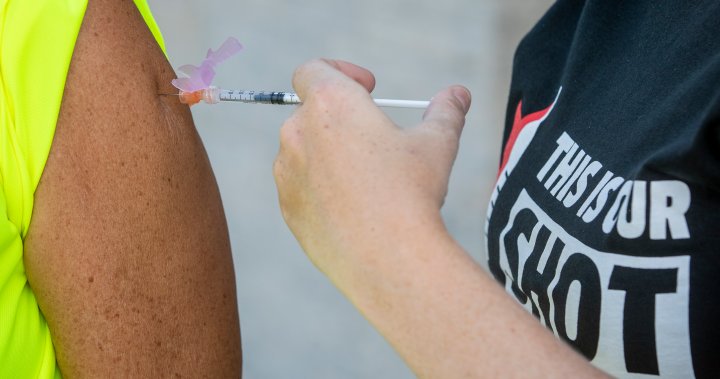 Canada hit a major new milestone in the COVID-19 vaccine rollout this week.

After a slow start to vaccination efforts at the beginning of the year and a rapid influx over recent months, the country officially has enough of the coveted vials to fully vaccinate every eligible Canadian.

That comes as public health officials have confirmed that only 0.5 per cent of current COVID-19 cases are in Canadians who have been fully vaccinated against the virus, and as a resurgence in cases among unvaccinated populations raises concerns about the possibility of a fourth wave this fall.

So why are there still vaccine holdouts?

Experts say it’s not as simple as assuming everyone not yet vaccinated is an anti-vaxxer and that while the logistics of getting vaccines into arms remains a job for the provinces and municipalities, there is a role for Ottawa in championing grassroots efforts to reach those who still have concerns.

“I think people have an image that there’s a lot of anti-vaxxers out there. It’s actually a very small amount of the people not getting vaccinated,” said Dr. Zain Chagla, an infectious disease specialist at McMaster University in Hamilton, who described hearing questions from his patients each day.

“There’s always one of them that has some questions that are a five, 10-minute conversation to get through … There’s a lot of those people still out there. There’s still fertile ground to reach them.”

Recent polling appears to support that it’s not as easy as assuming anyone without a shot won’t get one.

Abacus Data released the results of new polling on Tuesday morning that suggested while 84 per cent of adult Canadians accept being vaccinated, only eight per cent are outright refusals — the other eight per cent are what could perhaps best be described as “hesitant.”

The majority of that hesitant eight per cent — equivalent to about 2.4 million adults — said they would prefer to “wait a bit” before getting a shot, while the rest said they “would prefer not to be vaccinated but could be persuaded to take a shot.”

That hesitant eight per cent also appears to be down from the 30 per cent of hesitant Canadians recorded in previous polling in March 2021, a shift the pollsters called “significant.”

Polling from Ipsos for Global News last month also identified roughly 20 per cent of the population as still needing to be convinced to get the shot, with just one in 10 of those outright refusing to do so.

Prime Minister Justin Trudeau was asked on Tuesday about closing the gap and people need to understand the risk they taking for themselves and imposing on those around them, like children, who cannot yet get vaccinated even as the more contagious Delta variant spreads.

“People who are hesitant about getting a vaccine need to know that the consequences of getting COVID when you are unvaccinated are potentially extraordinarily severe,” he said, noting the government will keep up efforts like advertising to raise awareness about the vaccines.

“We know that the severe consequences of COVID — hospitalizations and the worst outcomes – will increasingly almost entirely in unvaccinated individuals and pockets of the population.”

Experts say boosting uptake among holdouts will require a human approach where health-care providers and community leaders avoid shame and instead focus on answering questions, as well as reducing barriers to getting a vaccine around things like language and mobility.

“There’s no one-size-fits-all solution here. One is to continue to reduce barriers to enable people to get vaccinated. The second is to treat people who have questions in a serious matter. This not the time for shaming and blaming or finger-pointing that does nothing but further polarize the situation,” said Dr. Isaac Bogoch, an infectious disease specialist with the University of Toronto.

“You have to address this in a meaningful and serious manner, and treat people in an empathetic approach. And of course, the third component is combating misinformation.”

The latter has been a persistent scourge throughout the pandemic, with U.S. President Joe Biden calling social media platforms like YouTube and Facebook “killers” for their role in facilitating the spread of misinformation about the virus.

The White House doubled down on that last Friday, pointing the finger at social media platforms for their “inconsistent enforcement” of how they handle misinformation claiming that COVID-19 vaccines are ineffective, that they carry microchips and that they hurt women’s fertility.

READ MORE: How conspiracy theorists are using a CDC database to spread misinformation and fear

There is no evidence to support any of those claims: the vaccines are highly effective at reducing severe outcomes and death from the virus and they do not contain microchips.

The claim that the vaccine would harm fertility was based on false information suggesting it would cause the human body to target a spike protein called syncitin-1 involved in pregnancy, which is distinct from the spike protein from the shell of the coronavirus itself and which the vaccine teaches the body to identify. That is false.

READ MORE: Will the coronavirus vaccine cause infertility? Here’s what you need to know

Connecting people who may have questions with community leaders and medical practitioners who can address their concerns will be key to making those who are hesitant more comfortable with the vaccine, the doctors say.

The best way to do that, Chagla said, is by amplifying voices within communities that are trusted.

He cited the It’s Our Shot campaign as one example and said the federal government’s focus on educating Canadians about vaccines means they should be working to get more resources to those kinds of grassroots groups.

“All it takes is one of those people to hit the right audience and let someone get vaccinated,” he said.

“Absolutely, there’s work locally, but there’s definitely a role for the federal government here in terms of getting some of those grassroots organizations to the top and really letting them have more of a voice out there.”

He said the federal government still has an important role to play in making sure good quality information is available to the public, while the job of reducing barriers to access will still largely fall on the provinces and municipalities.

“We know that there may be language barriers or mobility barriers or technology barriers preventing some people from getting vaccinated,” he said. “So I think there’s a lot that we can do collectively, as you know, as a country to get as many people vaccinated.”