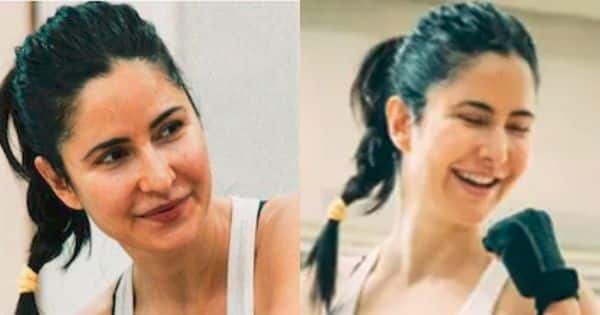 Katrina Kaif took to Instagram to share a video in which she is training rigorously. As you might be aware, she will be seen in Tiger 3 with Salman Khan. The film’s shoot recently resumed after the second wave of COVID-19. Katrina will be reprising her role of Zoya in the action film. Also Read – Will Sooryavanshi actor Mrunal Jain follow sister Rashami Desai’s footsteps and enter Bigg Boss? Here’s what he has to say [EXCLUSIVE]

“#work ??♀️ ………….actually I would be nothing without the amazing teachers and trainers who work so patiently with me @kuldeepshashi ⭐️learning something new everyday,” read Katrina’s caption. She can be seen doing a of Parkour and some kickboxing in the video. Have a look at it below: Also Read – Throwback: When Tiger Shroff spoke about the ‘worst’ phase of his life and revealed he had to sleep on the floor

In a past interaction with GQ, the actress said, “I love training. Without it, I’m not the best that I can be. I try to work out six days a week, for at least 45 minutes. I enjoy taking care of my body.” She also stressed upon the importance of diet. She said, “My staple rule, which I follow 95 per cent of the time, is no gluten, no refined sugars, no dairy.” She’ll eat carbohydrates though. “Carbs are fine – nothing wrong with them!” Also Read – Vanity vans of Kareena Kapoor Khan, Anushka Sharma, Katrina Kaif and more B-town beauties spell luxury and are more spacious than most city homes – view pics

On the work front, the actress is one of the top actresses today. But there was a time when she thought of quitting films. During an appearance on Karan Johar’s chat show Koffee With Karan, she spoke about feeling terrified after watching her film Namastey London. She said, “When I saw the film, I was terrified. Vipul (Amrutlal Shah, director) showed it to me and said, ‘What do you think?’ I didn’t call him back. You know, when a director shows the actress a film, you have to give him feedback. I took off home, shut the door, and didn’t give him a call.”

Katrina also said that Vipul was upset that she did not give her feedback to him. She said, “I called him and I said, ‘Hi Vipul.’ He asked, ‘What do you think?’ I said, ‘Nice, very nice film. Okay, bye’,” Katrina said.

She added that she felt that the film would end her career. She stated, “I just saw too much of me in the film and you start believing what people say. I was like, ‘No, no, no, people can’t see me in a film, they won’t watch the film, it’s a disaster. This is over, my life is over.’”