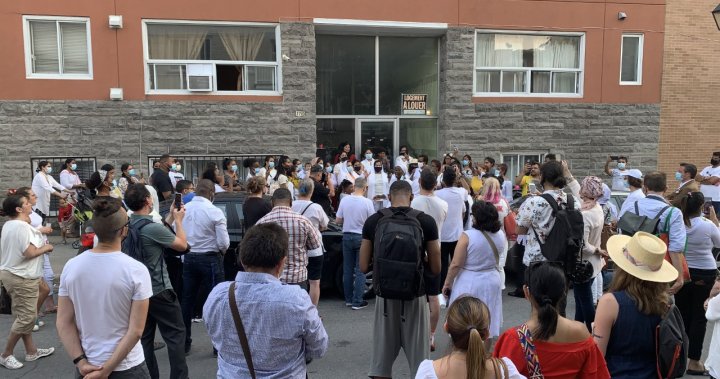 People gathered in Montreal’s Parc-Extension borough to honour the life of a young mother who was presumably killed by her partner.

Those in attendance shouted “No to violence,” before holding a moment of silence and releasing doves into the sky.

The event was put together by local community organization Afrique Au Féminin.

According to Montreal Police (SPVM), the mother of two was found dead in her home last week. A child was also in the apartment.

“It could be my next-door neighbour. I have three children, it could happen to my daughters. We need to be more in tune and aware about what’s happening around us.”

Organizers believe more can be done to help women who are victims of conjugal violence in Parc-Extension, a multicultural area where they say information about women’s rights in Canada is not widespread.

“It’s not the first time they kill a lady in Parc-Extension and the politicians do nothing,” said Rose Ndjel, who runs non-profit Afrique au Féminin. “I want us to be concerted, to work together.”

Ndjel says the victim frequented her organization and shared she had marital issues, adding that she had attempted to move on from the relationship.

“She fell through the cracks,” said Melpa Kamateros, the Executive Director of Shield of Athena, an organization providing family services for victims of conjugal violence.

“A police report was made on May 19th. From that time until the time she died, she should have been referred somewhere. She wasn’t”

Kamateros says the issue could lay in the screening and referral system — or a lack of one — set in place in the area.

“We don’t know if it’s because people are not trained in conjugal violence. But therein lies the danger also that untrained people will deal with very, very dangerous and volatile cases.”

Quebec has experienced a spike of femicides since the beginning of 2021, with an unofficial count putting the number at 14.

The province announced an investment of $222 million over five years for organizations dealing with women, particularly conjugal violence.

Part of the money will be given for the creation of rapid intervention cells, which groups front-line workers and other community organizations in order to help women escape dangerous situations.

They work together to evaluate and analyze a woman’s situation and take appropriate action.

Kamateros says that type of intervention could’ve helped the victim.

The suspect remains at large.