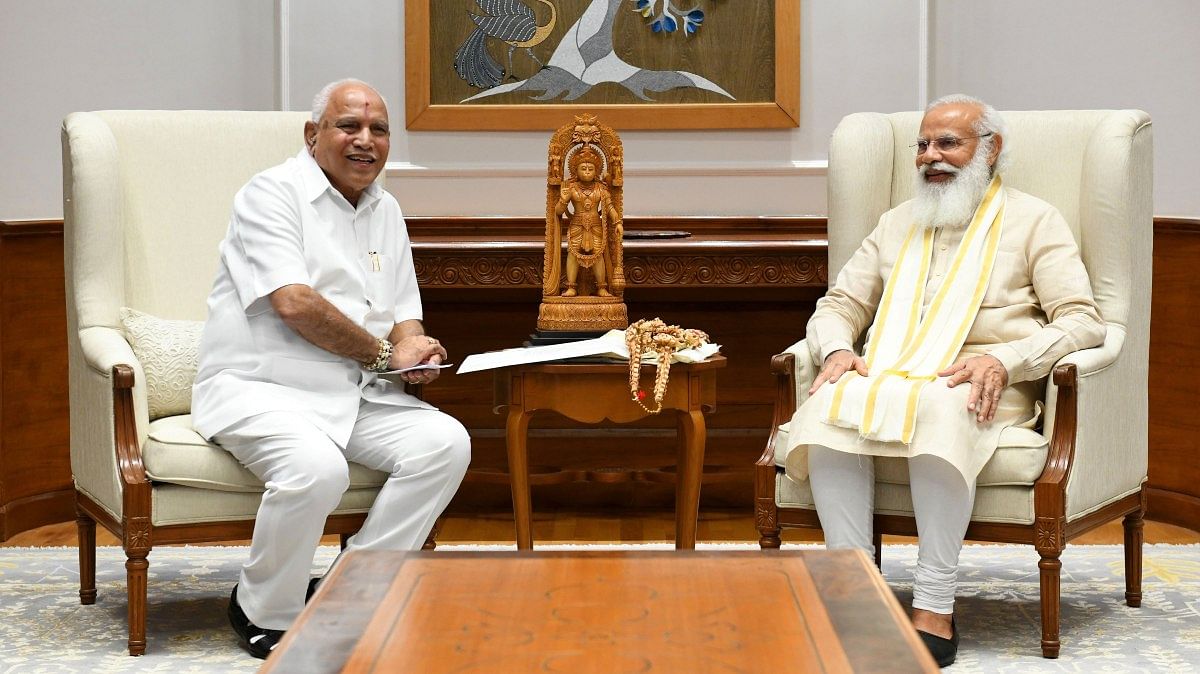 
Prime Minister Narendra Modi’s remark during an interview with his biographer, British author Lance Price, caused a a lot of heartburn in the Sangh Parivar, especially the Rashtriya Swayamsevak Sangh. Price’s book The Modi Effect, an inside look at the 2014 election campaign, quoted Modi as saying that people were looking for him, and not for the Bharatiya Janata Party — “a trusted name, not a party name”.

The RSS has always been chary of personality cult, but there was little it could do as Modi emerged bigger than his ideological patron and his party.

Six years since the release of the book, the Modi persona continues to be the defining element for the RSS and the BJP, but the latter wouldn’t have any regional leader harbour any such notions in their territories. Karnataka chief minister B.S. Yediyurappa, therefore, had to go. Other regional satraps of the BJP — Vasundhara Raje in Rajasthan, Raman Singh in Chhattisgarh, even Shivraj Singh Chouhan in Madhya Pradesh and Yogi Adityanath in Uttar Pradesh — must also be reined in.

The BJP recently expelled Rajasthan MLA Rohitashva Sharma, considered close to former CM Raje, who doesn’t seem to accept the not-so-veiled message from the high command  to step aside to make way for a new face in the state.

Similarly, party general secretary in-charge of Chhattisgarh, D. Purandeshwari’s recent announcement that the BJP will not declare its CM candidate for the 2023 election was an unambiguous message to former CM Raman Singh. CM Chouhan, who brought the BJP to power in Madhya Pradesh by engineering defections in the Congress, too has had a tough time with the party high command.

Something doesn’t add up

It would seem Modi and Amit Shah are working on a plan — retire ageing politicians to develop BJP’s next generation of leaders. Yediyurappa is 78, Raman Singh, 68, and Raje, 68. But then younger leaders are being reined in too, because they don’t fit in the high command’s scheme of things. Their independent-mindedness, propelled by their own mass base, does not seem to gel with the high commandist culture that today’s BJP seems to be borrowing from the Gandhis of the Congress.

On the face of it, undermining regional leaders seems to be political hara-kiri, of the kind that the Congress has been pursuing for long. But BJP leaders have a different take on this. They think these leaders owed their mass base to the party, and that this support is transferable. For instance, in the 2003 Rajasthan election, Raje-led BJP got a majority of its own for the first time, winning 120 seats in the 200-member assembly with 39 per cent vote share. But the BJP’s vote share was almost the same—38.7 per cent—in the 1993 election, too. Its stalwart Bhairon Singh Shekhawat had already laid a solid foundation for the party. Rajasthan elections were always a see-saw battle between the Congress and the BJP. Even in elections that the BJP lost—with or without Raje—the party’s vote share percentage hovered between 33 and 38 — 33 in 1998, 34 in 2008 and 39 in 2018.

There may be some merits in the argument that the BJP always had a strong base in Rajasthan. But, Raje’s own popularity can’t be discounted. It was under her stewardship that the BJP’s votes hare went up to 45 per cent in 2013, six percentage points more than what it got in 2003. Even when it dipped to 39 per cent in 2018, it was as good as the 2003 tally.

Numbers don’t lie. The BJP is certainly taking a gamble by sidestepping mass leaders who built the party in states. It’s also a fact that there is a big element of high commandism in the way Modi and Shah are dealing with them. After all, if age was the criterion, why is the party not looking for Haryana CM Manohar Lal Khattar’s successor? Khattar is 67. And why does Shivraj Chouhan, 62, have to struggle hard to pick his own team of ministers?

Also read: Modi’s centralisation of welfare delivery has a cost that BJP’s state leaders are paying

As things stand, Modi and Shah look determined to carry out a generational change in the BJP leadership in states. But if it looks like a gamble today, they certainly must be banking on history to discount possibilities of rebellion.

Remember Uma Bharti’s revolt? She had led the BJP to victory in the Madhya Pradesh election in 2003. Three years later, she formed her own party. It didn’t affect the BJP’s fortune in the state as it went on to win the next two assembly elections. Out in the political wilderness, she had to return to the BJP five years later.

Before her there was a rebellion by another Hindutva face — Kalyan Singh. The former chief minister of Uttar Pradesh, during whose tenure Babri Masjid was demolished in 1992, parted ways with the BJP in 1999, berating then Prime Minister Atal Bihari Vajpayee. He formed the Rashtriya Kranti Party and fielded 335 candidates in the 2002 assembly election; his party ended up with 4 seats and 4 per cent vote share. He returned to the BJP in 2004 only to quit again in 2009 and come back again five years later.

History does offer important lessons to regional satraps who may be in a defiant mood today. But it also has a chapter on Yediyurappa’s rebellion and its impact on the BJP’s fortune in Karnataka in the 2013 election.