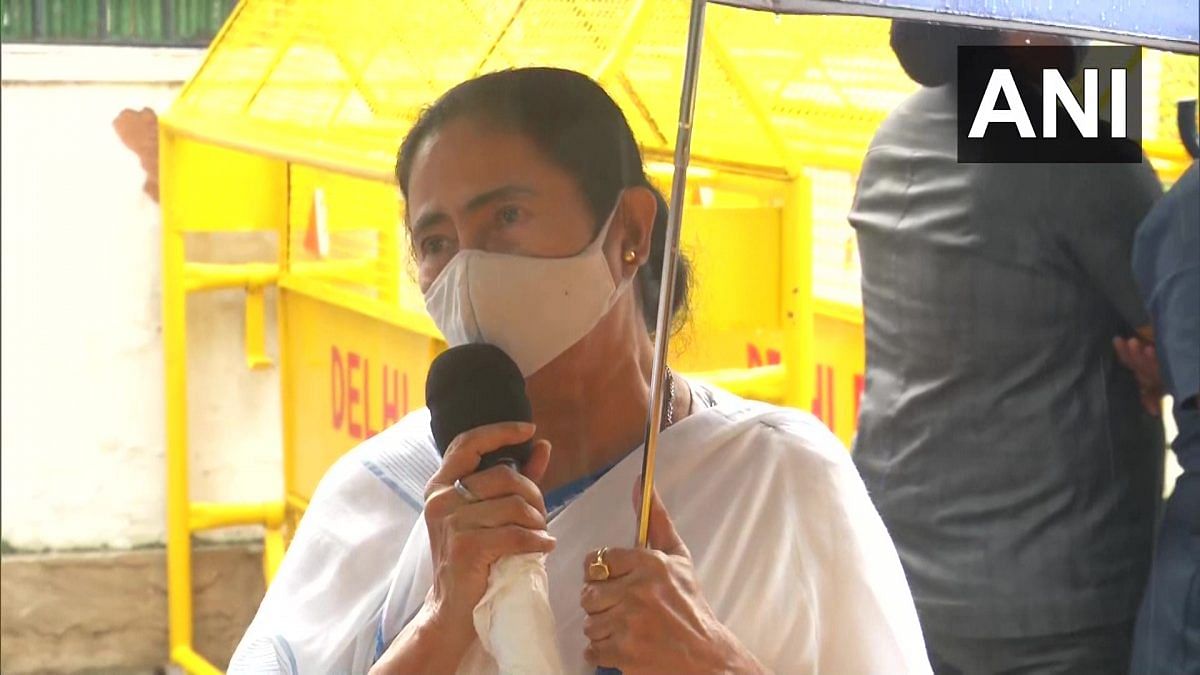 
New Delhi: On her first visit to Delhi after winning the assembly elections for the third consecutive time, West Bengal CM Mamata Banerjee Tuesday said Prime Minister Narendra Modi should call an all-party meeting to discuss the Pegasus phone hacking controversy and called for an inquiry by the Supreme Court.

Banerjee was talking to reporters soon after coming out of a 40-minute meeting with Prime Minister Narendra Modi at his residence.

While refusing to disclose if she raised the Pegasus snooping controversy with the PM, Banerjee told reporters, “Sometimes what I discuss in detail, I can’t tell in public. I think there should be an inquiry. The PM should call an all-party meeting and take the opinion of all parties.”

Opposition parties including the Trinamool Congress have been at the forefront of protests in Parliament demanding an inquiry into allegations that the government bugged phones of politicians, ministers, civil servants, public figures and activists using the Israeli spyware Pegasus. The opposition protests have led to repeated adjournments of the proceedings in both houses of Parliament for more than a week.

Describing the mood of the meeting with the PM as “good”, Banerjee also said that she did not discuss the by-election issue with Modi. “But I want the Election Commission to hold the by-election on time,” she said.

Banerjee had lost her Nandigram assembly seat to her bete noir Suvendu Adhikari and now needs to win a bypoll within six months of the result, which was declared on May 2, to continue as chief minister.

The CM made a case for the bypoll, saying that when the eight-phase assembly election was held in April-May, Covid test positivity rate in the state was 33 per cent but today it has come down to 1 per cent. “When the third wave comes, we can’t have elections. So before that, by-elections should be held,” she said.

Banerjee’s visit to the Capital has come at a time when once again talks are gaining ground of a united opposition to take on the BJP-led NDA in the 2024 Lok Sabha elections.

The Trinamool Congress has of late been taking the lead in Parliament in aggressively questioning the government on the farm laws and demanding an answer from the Prime Minister and home minister on the Pegasus phone snooping issue.

She was scheduled to meet President Ram Nath Kovind Thursday but she said could not because they (Rashtrapati Bhawan authorities) are asking her to get an RT-PCR test done despite the fact that she is double vaccinated. “I am not from here. Where will I go to get tested?” she said.

Asked about whether Congress will be a part of the united front, Banerjee told reporters, “In a democracy, if you want to fight, you should not discriminate between parties. Whoever is a like-minded party must come together and work.”

“I am always hopeful,” Banerjee said alluding to the prospect of a opposition coalition before the 2024 elections.

The CM also told Modi to expedite the process to change the name of West Bengal to Bangla, a demand that the state has been making for a long time.

The Covid situation in Bengal also came up for discussion in the meeting. Banerjee said that the Centre should provide more Covid medicines and vaccines based on the state’s population. “Currently, we are getting less compared to other states,” she said.