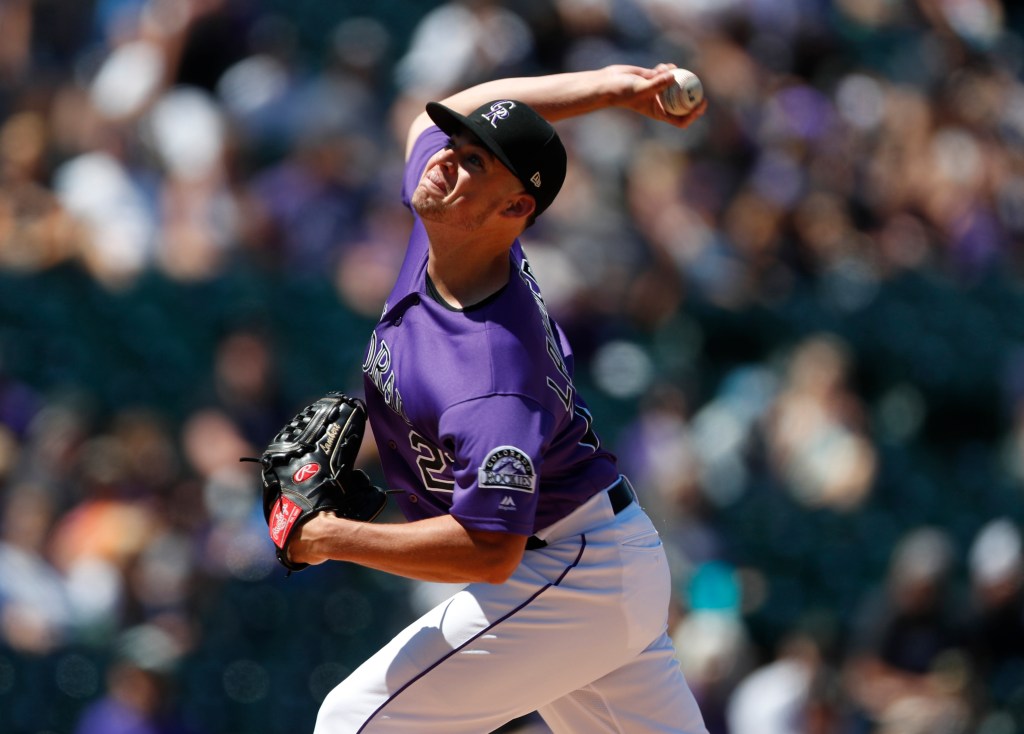 One hundred games into the season, the Rockies own a 43-57 record. Naturally, next season is on their minds. At least part of the time.

In that context, manager Bud Black received a boost Tuesday.

He watched right-hander Peter Lambert, who’s working his way back from Tommy John surgery, throw a 25-pitch, live bullpen session. Black came away thrilled with what he saw.

“He pitched with a pretty good intensity and a pretty good effort level,” Black said. “He threw the ball well. I was really, really encouraged and excited for him. Peter felt good. Really good news coming out of today. He’s on the right track.”

Black, however, said there’s no timetable as to when Lambert might pitch in a minor league game.

It was more than two years ago that Lambert hogged the big-league spotlight.

The rest of the season didn’t go nearly as well. He finished 3-7 with 7.25 ERA in 19 starts. In 2020, Lambert never really got to practice the lessons he learned. Before the COVID shutdown, he began experiencing elbow problems in a Cactus League game. He tried to pitch during summer camp, but when the elbow pain flared up again, surgery became the only option.

“His throws look off and have all year,” a rival baseball executive told Rosenthal.

Rosenthal sighted Statcast statistics that support the executive’s observation. According to Rosenthal, the average velocity on the top 10 percent of Story’s throws is 78.1 mph, down from 80.4 last season and an average of 85.4 the four previous years.

Story, 28, went on the injured list and missed 11 games in late May and early June with a right elbow strain, but last week he told The Post that his elbow is “100% healthy now.”

Black said Tuesday that he sees no problems with Story’s throws.

Ruiz, 27, was picked up off waivers from the Orioles organization in late May after Baltimore designated him for assignment. He has a career slash line of .214/.290/.364 with 28 home runs in 285 big-league games.

“He was one of the more consistent performers on the Triple-A team,” Black said. “He gives you a pretty quality at-bat.”

Black said Ruiz could be a multi-positional player, at third, second and first base, as well as the outfield.

Adams did not ask for his release so that he could pursue other opportunities, but there were simply not enough at-bats for him with Colorado.

Adams, 32, appeared in 22 games with Colorado but was used primarily as a pinch-hitter. He hit just .167 in 40 plate appearances and had just five plate appearances since coming off the injured list in early July.

Footnotes. Infield prospect Colton Welker, coming back from an 80-game suspension for testing positive for the banned performance enhancer Dehydrochlormethyltestosterone (DHCMT), played in his first “camp” game at Arizona on Monday, getting a hit and driving in a run in two at-bats. Despite Welker’s absence, Black said there is “definitely” a chance Welker could get called up to the Rockies this season. … Lefty Ryan Rolison, the Rockies’ No. 2 prospect who was sidelined first by appendicitis and then by an injured hand, has begun throwing again. He has not pitched off the mound yet. He also has a chance to make his Rockies debut this season.

Gonzalez has not pitched well on the road, going 1-5 with a 6.70 ERA. In his last start, the right-hander allowed four earned runs through five innings at Dodger Stadium. He did not factor into the decision when the Rockies rallied for a 9-6 win in the 10th inning. Gonzalez has not faced the Angels since 2015 when he pitched for the Rangers. In two games (one start) vs. the Angels, he’s 0-1 with a 17.18 ERA, but that’s a little misleading because six runs came in 1 2/3 innings of his start. Heaney has pitched well against Colorado, going 2-1 with a 3.10 ERA and 18 strikeouts in three starts. He’s coming off a win against the Twins in which he tossed seven innings, allowing two earned runs on four hits. He struck out seven and walked two. He leads the Angels’ staff in innings pitched (88.0) and strikeouts (105).

Trending: Right fielder Charlie Blackmon entered Tuesday’s game hitting .347 (25-for-72) over his last 20 road games, the seventh-highest road average in the majors over that span.

At issue: Infielder Ryan McMahon, who missed two games because of sore legs, is trying to find his home runs swing. He entered Tuesday’s game without a home run in 26 games, the second-longest streak of his career. He went 43 games without smacking a homer in 2018.