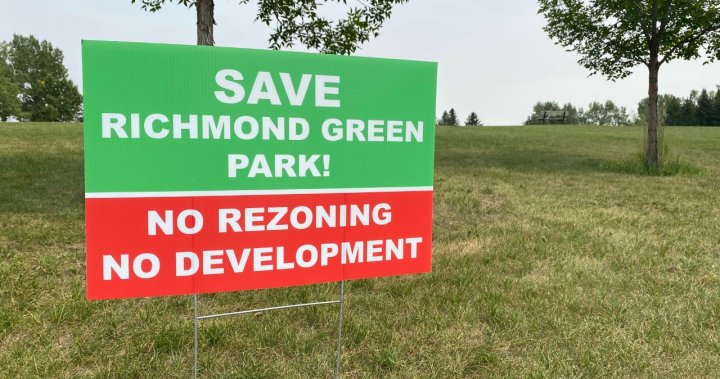 Calgary city council has given the green light for a development on the northwest corner of Richmond Green Park to go forward.

Councillors voted 9-5 to approve the land-use change and development in the park space, but full approval will be withheld until after the ongoing council meeting.

Farkas, who represents Ward 11 and is running for mayor, objected to the third and final reading of the bylaw. Third reading requires unanimous consent to finalize the approval.

Nenshi said he anticipates that vote will come down Wednesday.

The Richmond Green area, which is about 52 acres in size and owned by the City of Calgary, sits between Crowchild Trail and Sarcee Road just south of 33 Avenue S.W.

As part of the plan approved by council, the two smaller ball diamonds will be removed and 5.5 acres of park space will be sold to allow for a development that includes commercial space as well as multi-family homes.

According to city administration, money from the sale of the land would go towards creating more park space through remediation of the former golf course, which the city closed in 2019.

“This means investment dollars today to figure out what we do with the closed golf course,” Ward 8 councillor Evan Woolley said. “As opposed to the suggestion that this goes to November’s budget and be included in a priority list, as all parks are, and we know that list is very long.

“This opportunity (allowed) us to creatively fund more park space than we have today.”

The money will also go to the removal and remediation of the the former city works depot, which also needs to be decontaminated as it served as a storage space for road salt, administration said.

Dozens of speakers took part in the public hearing, which began late Monday night and continued throughout the majority of the day on Tuesday.

Many, if not all, were in opposition of the land-use change and development.

“There was a massive amount of outrage over this and at least eight councillors ignored the overwhelming majority of residents who oppose this.”

Bumstead, who is with the Richmond Knob Hill Community Association, was one of the speakers who outlined concerns the sale would result in less park space for the community and that it would set a precedent for the city to sell off park space to private developers in other areas around Calgary.

But city administration noted the plan would see four acres of additional park space added once the remediation is finished on the golf course and the depot.

“It will have significant investment in facilities that citizens want and need. It will be bigger than the park is today.”

Although the plans call for a new diamond to be built to replace the two that are being removed, council voted to ask administration to do further community engagement to determine what amenities residents in the area want to see as part of the upgrades.

Work on an updated master plan on the park — with that community engagement — is expected to be back in front of the new council next spring.

“We need to engage those people who are interested in engaging, and as I’ve said this publicly before, the Rutland Park Community Association engaged in significant amounts of obstructionism and misinformation,” Woolley said.

“We cannot engage with people who are not willing to engage with us thoughtfully and honestly; I think that’s going to be a challenge for the next Ward 8 city councillor.”

Leanne Ellis with the Rutland Park Community Association said that while they were disappointed with the decision, residents would be looking into an appeal process.

“Certainly we will reach out to our residents and encourage them to be engaged on this matter,” Ellis said.

According to Nenshi, the land will now be prepped for sale, a process expected to take a few months.