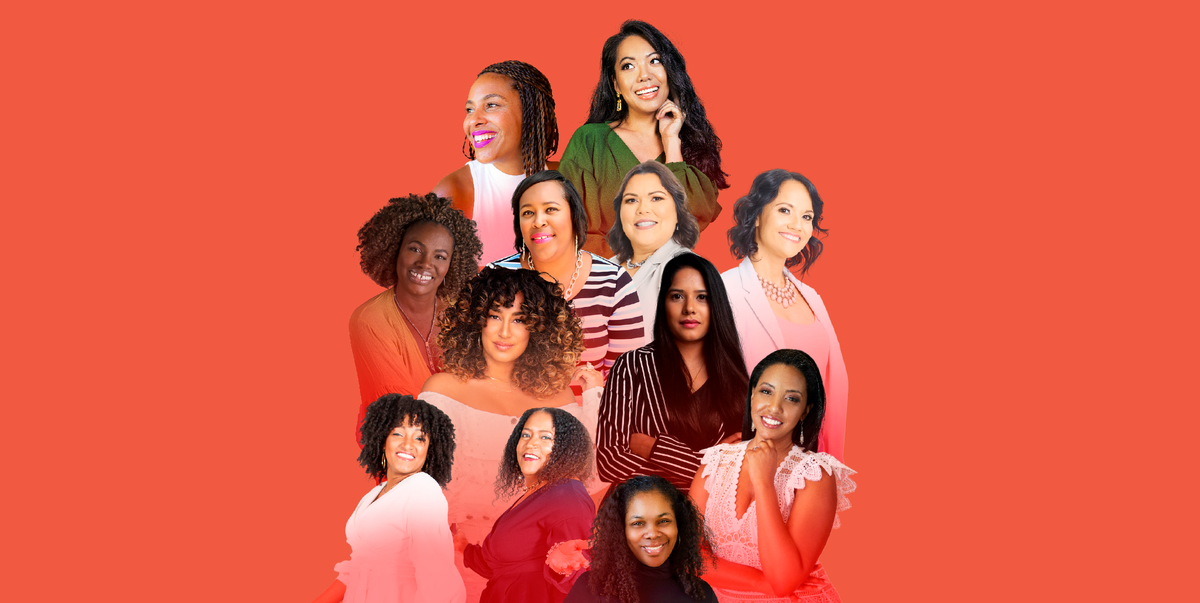 Here’s a trash stat: In 2020, a year of record-setting venture-capital investment, Black- and Latinx-women-founded start-ups got less than half of 1 percent of funding. So yes, it is exponentially harder for women of color to launch companies—and yet they do. There are thousands each year who choose not to be daunted or discouraged, and thanks to them, the face of American business is changing for the better. But it’s time for more. That’s why Cosmo has partnered with digitalundivided (a nonprofit social start-up that leverages data, advocacy, programming, and more to catalyze growth for Black and Latinx women) on an annual initiative to shine a light on and support women of color entrepreneurs. Our first group of honorees—who, along with hundreds of others, submitted applications that were vetted over a monthslong process—have found success that, we hope, is inspiring to anyone who’s doubting their own. Meet the bosses you want to work for—and become—by tapping their names below, or scroll on for the full list.

Her business: Ruby Love, which makes leakproof swimwear and underwear

How it started: “This company was born out of frustration. I couldn’t wear tampons because I was diagnosed with PCOS,” says Crystal. She was working in the auto industry and had no experience in clothing but wanted a solution. So in 2015, she “didn’t think twice” about taking a risk.

How it’s going: Ruby Love was the first company to make period swimwear, earning a lot of consumer loyalty. “The pandemic allowed me to sit back and realize what I’ve done,” says Crystal. “I’m really proud.”

Why I do it: “A lot of Black women reach out to me for advice. There were so many obstacles I could have avoided. My goal is to help others.”

My motto: “Don’t stop until you get it done.”

Her bragging rights: She became the 14th Black woman to raise more than $1 million from VCs with her first start-up, the tech firm Lawchamps.

How it started: After finding success in tech, Kristina wrote a children’s book based on her experience of losing her father to cancer when she was 7. “I never got the help I needed to process his death,” she says. It inspired her to launch Guardian Lane, where kids access counselor-approved activities and videos that help them process grief.

How it’s going: Guardian Lane now partners with 1,300 schools across the country to provide students with access to grief resources.

Why I do it: “Women of color are often thought of last when it comes to entrepreneurship. In our communities, raising money isn’t talked about. We went in there blind, stumbling our way through. If I had known the metrics that investors wanted up front, it would have saved us so many rejections. Being able to share that information with other women is so helpful.”

My Forever Guardian: Healing With Friends From the Loss of a Loved One

Her bragging rights: “We launched the Latina haircare category for Target and sold out that very first weekend,” says Julissa.

How it started: Julissa got her first taste of running a business at her father’s restaurant in L.A. when she was a teen. But she always gravitated toward hair, even when she was getting her master’s degree in business management. “I was the person doing girls’ hair at quinceañeras,” she says. After saving money while working for big companies like Nestlé and PepsiCo, she self-funded her line and relied on social media to spread the word and on her family for help: “Our headquarters was my Tio Juan’s garage. My cousin Vanessa drew the label.”

How it’s going: Rizos Curls is now available at Ulta Beauty too. “We keep entering spaces where we are the first to be self-funded and Latino-owned.”

Why I do it: “Customers are demanding diversity in front of and behind the scenes. It would be a disservice if I’m the first and the last founder like me. I need to leave the door open for so many others.”

Her business: Personal-hygiene company Awkward Essentials, which makes Dripstick, a device that soaks up fluids after sex

How it started: “Every time I had sex, I didn’t like the cleanup,” says Frances. “I got the idea for Dripstick while baking and wiping the bowl with a spatula—like, Oh my god, I wish I had a spatula for my vagina! I wanted to solve this problem for others. I ordered 20,000 units of product and threw together a website.”

How it’s going: “Our sales have been growing 20 to 30 percent month over month,” says Frances. Dripstick also has Big Deal advisers like sex-tech star Cindy Gallop.

Why I do it: “Female founders are the only ones who can solve our own problems. I want to encourage other women to just do the thing.”

My motto: “If we wait till we’re ready, we’ll be waiting the rest of our lives.”

Her business: L2E Industries, a courier company that delivers packages to Amazon customers

Her bragging rights: “I’m the only Black human-trafficking survivor to own a business that has a national contract with Ama­zon,” says Sophia.

How it started: “As a survivor of human trafficking and sexual assault, I used some of the anger about what had transpired against me to propel me,” says Sophia. “That’s what gave me the confidence and healing to start this company.”

How it’s going: Sophia’s using her profits and success to launch a medical clinic that will focus on getting vaccines to Black and brown communities in rural areas. “I could never have seen myself coming out of my upbringing doing this,” she says. “It’s fulfilling.”

Why I do it: “There aren’t a lot of business mentors standing by in our community. This field has fewer than 2 percent Black women owners. I try to change that dynamic.”

My motto: “My passion wakes me up.”

Their bragging rights: They’ve been selling A LOT of cookies since 2019. “We finally did our first export to the U.S. and are now in 28 stores in South Florida,” says Jonelie.

How it started: In 2017, after working in Coca-Cola’s marketing division, Jonelie contacted her old friend Ailed, who has celiac disease and had been baking her own gluten-free cookies. Jonelie proposed the two go into business and produce Ailed’s creations widely.

How it’s going: Friends and fam were shocked they decided to “make cookies,” says Jonelie. But customers are obsessed: “People tell us, ‘This doesn’t taste gluten-free or plant-based. It’s just a delicious cookie.’”

Why we do it: “I don’t have many female role models. I want to be one for others,” says Jonelie. Ailed agrees: “We want to let other women know it’s possible.”

Our motto: “You cannot give up.”

Her bragging rights: Those products can now be found in Whole Foods nationwide.

How it started: After going to Harvard Business School and working at beauty brands, Dorian wanted to build something. Her goal? A high-quality, accessibly priced wellness line that celebrated diversity: “The brand is clean, conscious, inclusive plant magic.”

How it’s going: Dorian was one of a few founders chosen to participate in Target’s Takeoff Beauty Accelerator program. “All these milestones reinforce the benefits of inclusivity,” she says.

Why I do it: “Wellness has had one face: the girl who’s skinny, affluent, white. But we all deserve access to it. I want to bring in people who’ve been excluded.”

Her bragging rights: “We’ve been approved by the FDA, which is a huge milestone,” says Veena.

How it started: “I’m from Banga­lore, India, and I came to the U.S. in 2012 to work on my master’s degree in game design and development,” she says. After meeting her cofounder, who ran a neurological recovery center, Veena learned about how VR can help with physical and cognitive therapy. She started working with patients and saw VR’s very real benefits.

How it’s going: “We’ve raised about $2.8 million,” she says. “And we’ve been able to reach more than 350 patients with thousands of sessions.”

Why I do it: “I’ve been dismissed so many times because of the way I look. I want to show that CEOs don’t always have to be white men.”

My motto: “You can’t be perfect all the time.”

GET A VIRTUAL DEMONSTRATION

Her bragging rights: Eskalera has an all-star list of clients, like heavy hitters in the financial services and health care industries and the Ivy League.

How it started: After getting a PhD in comparative literature and women’s studies, Tolonda spent 22 years working in human resources. “I wanted to help people with real issues, not theoretical ones,” she says. But she felt the industry lacked the technology to actually show companies that DEI initiatives are worthwhile. That’s why she launched Eskalera: “We needed to have numbers behind inequity so that people would take it as seriously as they do any other kind of business problem.”

How it’s going: Last year, Eskalera created an Inclusion Index that companies can use to easily score their corporate culture and see where they have room to grow.

Why I do it: “When you make things inclusive, it works better for everybody.”

Their bragging rights: They got accepted to the very exclusive Google for Startups Founders Academy.

How it started: “My mom, Debbie, is a Harvard Law benefits attorney—she was worried about ageism and sexism in the workplace because she was navigating menopause and hot flashes,” says Markea. There was nothing subtle on the market. “It didn’t make sense. Why weren’t there better solutions for how to navigate these things? I have a background in corporate supply chains, so we just went for it.”

How it’s going: “At first, it was so hard to convince male investors this product was necessary,” says Markea. “But we raised over half a million dollars, have ordered 1,000 units, and are almost finished with our beta testing.”

Why we do it: “You can’t underestimate the importance of your network,” says Markea. “I spend so much time in my head, and it’s helpful for me to be part of these communities that empower women.”

Our motto: “One closed door could lead to other open doors.”

GET EARLY ACCESS TO THERMABAND PRODUCTS WHEN THEY LAUNCH

By the way, here are the judges who chose these badass bosses…

Jessica Goodman
Op-Ed Editor
Jessica Goodman is the New York Times bestselling author of The Counselors, They’ll Never Catch Us, and They Wish They Were Us.