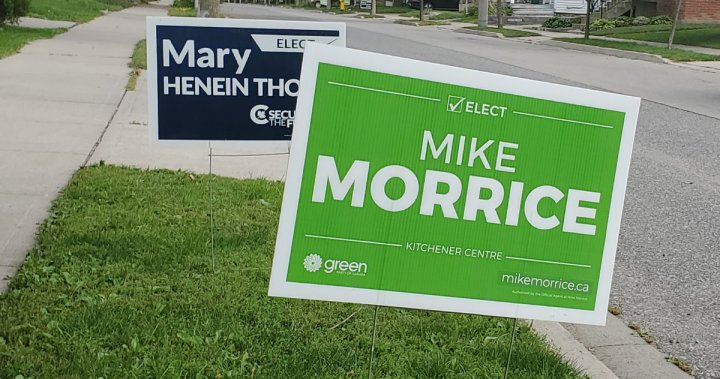 Three of the five seats in Waterloo Region remain too close to call while the Green Party picked up one of the others in the 2021 federal election.

In Kitchener Centre, Mike Morrice is projected to become the first Green Party candidate to win a seat in the region as he held off a strong challenge from Conservative candidate Mary Henein Thorn to become the new MP for riding.

Morrice is set to replace Raj Saini, who withdrew from the race a few days after nominations were finalized to deal with allegations of improprieties. That left a wide-open race as the Liberals were left without a candidate.

The Green Party candidate, who is the founder of Sustainable Waterloo Region as well as Green Economy Canada, finished a close second in the last provincial and federal campaigns.

In Waterloo, in what was the first area race of the night to be called, Liberal incumbent Bardish Chagger was projected to cruise to an easy win for the third time running.

The minister of diversity, inclusion and youth easily dispatched her opposition with Meghan Shannon being her closest rival.

For the third time in a row, the Kitchener —Conestoga riding is a toss-up between the Liberal and Conservative candidates.

Lewis narrowly edged Conservative MP Harold Albrecht in 2019 by a few hundred votes. The two also faced off in 2015 with Albrecht winning by a similar margin.

There will be another new face in the riding of Kitchener South—Hespeler as well, although the outcome was too close to call as of 7 a.m.

The seat was formerly held by Marwan Tabbara, who first took office in 2015. He resigned from caucus last year after it was learned he had been charged with assault. He recently confirmed that he would not be seeking re-election.

May is seeking his third straight term in office.