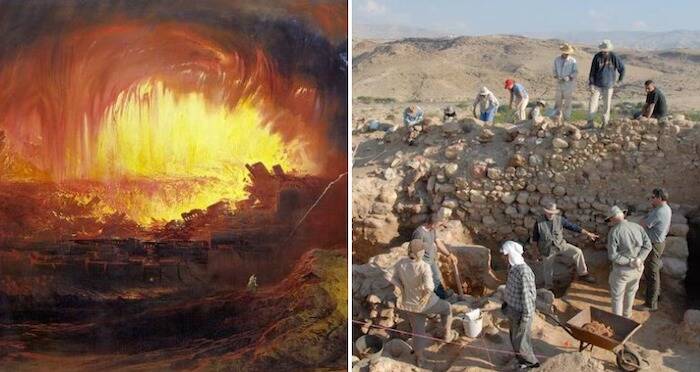 Some 3,600 years ago, the city of Tall el-Hammam in present-day Jordan was suddenly obliterated in a great blaze caused by a meteoric explosion known as a “cosmic airburst.”

UC Santa BarbaraResearchers investigating the 3,600-year-old ruins of Tall el-Hammam, the city believed to have inspired the Bible’s tales of Sodom.

In 1650 B.C., the citizens of Tall el-Hammam in present-day Jordan witnessed a meteor light up the skies like nothing they’d ever seen before. The impact was 1,000 times stronger than the atomic bomb that destroyed Hiroshima and caused temperatures of 3,600 degrees Fahrenheit. The city was flattened instantly and no one survived.

Now, a new study has posited that this cataclysmic event may have inspired the Biblical tale of Sodom and its fiery destruction.

While none of Tall el-Hammam’s 8,000 inhabitants lived to tell the tale, experts believe that people in neighboring regions witnessed the blast and spread the story of its destruction via word of mouth. According to The Conversation, these accounts eventually led to a written version that then found its way into the Bible.

As published in the Scientific Reports journal, the study concluded that neither volcanos nor earthquakes could’ve caused the molten metals and ceramics unearthed at Tall el-Hammam over the last 15 years. These would’ve required far higher temperatures to liquefy — such as a meteoric explosion known as a “cosmic airburst.”

Scientific ReportsAn illustration of the cosmic airburst that’s believed to have killed at least 8,000 people and flattened two cities.

While chronicling what exactly happened 3,600 years ago may seem impossible, study co-author James Kennett focused squarely on the tangible evidence. According to The Sun, that led him and his team to zero in on the molten glass and molten metals buried in five feet of scorched earth.

He and his colleagues believe that a meteor that exploded into a fireball some 2.5 miles above the Earth would have been more than enough to set the entire city on fire. Clothing and wood would have burned up in an instant while metals, mud bricks, and pottery boiled and melted. Meanwhile, the people on the scene would have been blinded and torn apart by a fireball and shockwave moving at 740 miles per hour.

Such unprecedented destruction, the researchers claim, could very well have inspired the kinds of apocalyptic tales that made it into early religious texts.

“We present evidence that in 1650 B.C.E., a cosmic airburst destroyed Tall el-Hammam, a Middle-Bronze-Age city in the southern Jordan Valley northeast of the Dead Sea,” the study said. “There is an ongoing debate as to whether Tall el-Hammam could be the Biblical city of Sodom.”

Scientific ReportsThe southern Levant, with the Tall el-Hammam site and Dead Sea to the north.

After further analysis, it appears that few events in known history would have compared with the cosmic airburst at Tall el-Hammam.

Using known meteoric impacts and nuclear detonations from the past, the researchers used an impact calculator to compare the destruction at Tall el-Hammam with similarly devastated sites around the world — such as the Tunguska event in Russia in 1908 and the comet that killed the dinosaurs 66 million years ago.

Scientific ReportsThe impact of the Tunguska event, as superimposed on the Dead Sea area.

Ultimately, questions still remain. But what we do know for sure is that the area was left in ruins after the event, with Tall el-Hammam and more than 100 other settlements abandoned for centuries. Some believe that the high levels of salt in the ground because of the meteor had left the Earth unsuitable for crop growth, leaving the area uninhabited.

In the end, it certainly seems plausible that this apocalyptic incident affected inhabitants of the region so deeply that the story was handed down for hundreds of years — and remains chilling to this day.

After reading about the meteor that destroyed an ancient Middle Eastern city and possibly inspired the Biblical tale of Sodom, learn about the Biblical shrine in Israel found to have hosted cannabis rituals in the eighth century B.C. Then, find out who really wrote the Bible.