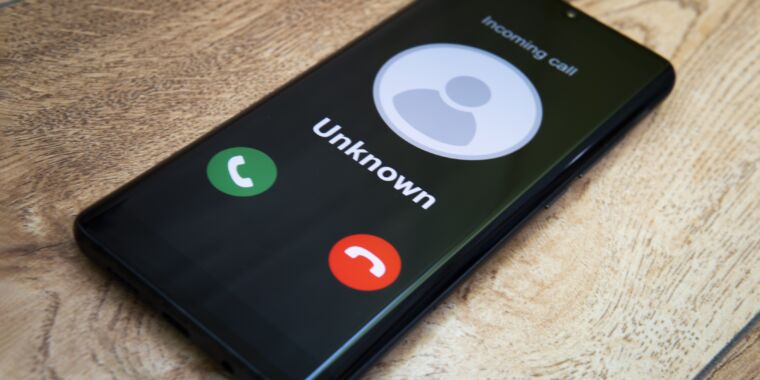 Attorneys general from all 50 states have created an Anti-Robocall Litigation Task Force “to investigate and take legal action against the telecommunications companies responsible for bringing a majority of foreign robocalls into the United States,” they announced yesterday.

In the task force’s first action, it “issued 20 civil investigative demands to 20 gateway providers and other entities that are allegedly responsible for a majority of foreign robocall traffic,” said an announcement from North Carolina Attorney General Josh Stein. The task force’s formation was led by Stein and the attorneys general of Indiana and Ohio, the announcement said.

Stein cited data suggesting that “more than 33 million scam robocalls are made to Americans every day,” such as “Social Security Administration fraud against seniors, Amazon scams against consumers, and many other scams targeting all consumers, including some of our most vulnerable citizens.”

Gateway providers are responsible for ensuring that foreign traffic is legal but “are not taking sufficient action to stop robocall traffic,” Stein’s announcement said. “In many cases, they appear to be intentionally turning a blind eye in return for steady revenue.”

“Robocalls are an intrusive and obnoxious menace, responsible for $29.8 billion in fraud last year alone,” Connecticut Attorney General William Tong said. “Our Anti-Robocall Litigation Task Force will shut down the telecom fraud highway and bring these scammers to justice.”

The Federal Communications Commission has also been cracking down on gateway carriers that bring foreign robocalls to the US. The FCC defines a gateway provider as “a US-based intermediate provider that receives a call directly from a foreign originating provider or foreign intermediate provider at its US-based facilities before transmitting the call downstream to another US-based provider.”

The FCC issued an order in May that requires gateway providers to implement STIR/SHAKEN Caller ID authentication technology in the IP portions of their networks by June 30, 2023. Other phone companies were already required to do so.

Phone companies are also prohibited from accepting calls from providers that do not certify compliance with the FCC’s Robocall Mitigation Database. There’s some evidence that robocalls have declined under the new rules, but spam texts appear to be on the rise.