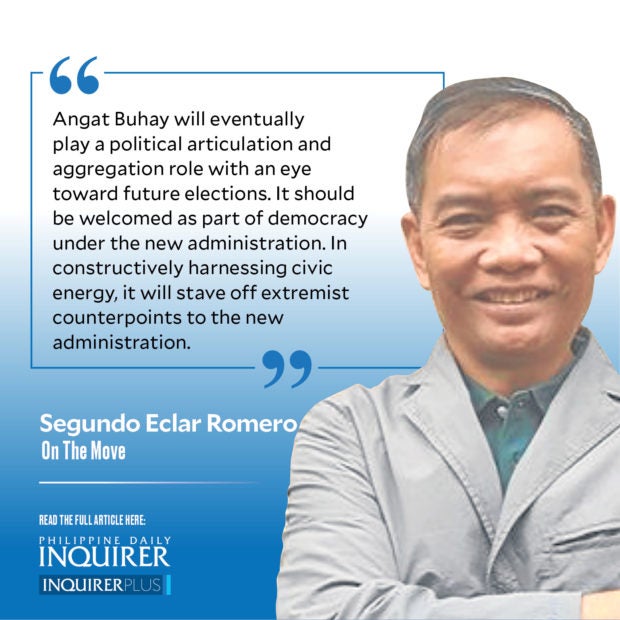 The announcement by Vice President Leni Robredo that she will establish the Angat Buhay NGO on the first day of the new administration has quickly buoyed the hopes of her supporters, who were devastated by the convincing electoral victory of Ferdinand Marcos Jr. The momentary despair of the Pink Movement has converted into the anticipatory mobilizational energy for Angat Buhay.

The quick and wide understanding of the strategic importance of the Angat Buhay NGO comes from the realization during the campaign that organizing the political forces that would challenge the incumbent should have begun as early as 2017, way before the midterm election of 2019. Angat Buhay, as a concept and program meticulously designed to be shorn of political teeth, was launched in October 2016 by the Office of the Vice President, as a public and private partnership to fight poverty, especially among the poorest and most marginalized communities in the country.

This new Angat Buhay can no longer aspire to be agnostic. As an incipient power grid, it is five years too late, if opposition political organizing were to prepare for the 2022 presidential elections, if not also the 2019 elections. A “shadow” Cabinet with policy and program nongovernment organization (NGO) portfolios could have created and sustained the awareness of the opposition. Now, Angat Buhay will see a Cabinet-like organization into focal areas for development, well beyond the initial six areas of Angat Buhay — food security and nutrition, universal health care, public education, rural development, housing and resettlement, and women empowerment.

For upcoming national elections, the 2025 and the 2028 elections, Angat Buhay could be a critical organization for electoral success. Despite the overwhelming victory of the Marcos Jr.-Duterte team, still the quality of surge and outward commitment of the upper and middle class for VP Leni is also an unprecedented high watermark of voluntary unorganized support from prominent personalities in the arts, media, business, and politics.

Angat Buhay will be starting out with a high initial velocity and can be a formidable social, developmental, and political force. We have yet to see if there is a similarly robust strategic and far-seeing organization of the new Marcos Jr.-Duterte administration, to be seen in the quality of the Cabinet and its short- to long-term development and business plan. Marcos Jr. may not do well in parrying political investors’ demand for their pound of Cabinet flesh.

Angat Buhay will likely play a critical collaboration role with the government. The Marcos Jr.-Duterte administration should not dismiss it as obstructionist. Even with a solid Marcos Jr.-Duterte strategy hammered out by technocrats and savvy public sector managers, a successful Angat Buhay NGO would be a boon to the new administration. Not only will it validate and complement the overall directions of the government’s policy in many fields, it may also suggest ways of redirecting and strengthening these policies. The government should remain poised, as it has the mandate, the bureaucracy, and the resources, which even the biggest NGOs cannot approximate.

As for Angat Buhay, it would have to create wide credibility through critical inputs into local problem-solving. The best strategic use of Angat Buhay is to help local governments design and successfully implement local development plans and executive-legislative agenda. Improving the quality of local governance has the greatest impact on improving the lives of their constituents.

This localization strategy can go as deep as helping barangays and village homeowners associations. This goes for informal settlements, where quality of life is most horrendous and in need of immediate improvement.

Angat Buhay grassroots-level governance and social development activities will be ripe for Red-tagging by the hyperactive and extreme partisans in the new government. This interdiction will do more harm than good overall and should be curbed by the Marcos Jr.-Duterte administration.

A way to dodge the association of Angat Buhay with the left is to put it squarely within the ambit of the 17 Sustainable Development Goals campaign of the world, the region, and the Philippine government itself. Partnerships at the institutional, program, project, and event levels can be pursued with public agencies like the National Academy of Science and Technology, National Research Council of the Philippines, and line departments for agriculture, environment and natural resources, and local government.