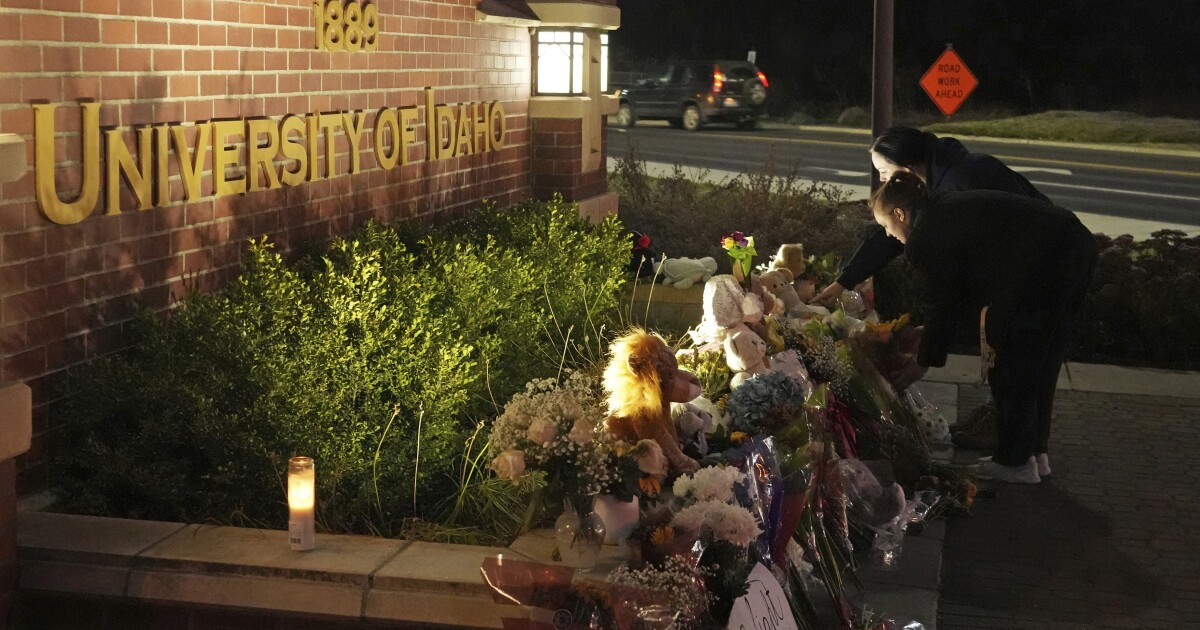 It has been a week since the police found four University of Idaho students dead at a house just steps from the campus, but no arrests have been made and no suspects have been identified, fueling fear and uncertainty among students and faculty.

The coroner’s office in Moscow, Idaho, ruled the deaths as homicides through stabbing, likely with a large knife, but no weapon has been found as of Monday afternoon. Police identified the victims as Ethan Chapin, 20, Madison Mogen, 21, Xana Kernodle, 20, and Kaylee Goncalves, 21. The FBI has joined local law enforcement investigating the case.

With an unknown killer still at large, so many students left early for Thanksgiving break that the university postponed a candlelight vigil originally scheduled for last week. Some are unsure whether it is safe to return.

The university, meanwhile, is caught in a situation over which it has little control. Because the crime took place off campus, the investigation is under the jurisdiction of the local police, whose public comments about the investigation have been “at best, chaotic and unclear,” said S. Daniel Carter, president of SAFE Campuses, a Georgia-based firm that offers consulting and training on campus safety.

“As long as you have an unidentified suspect at large, no law-enforcement agency can know for sure that there is no threat,” said Carter. “If a person is willing to kill four people, there is nothing to indicate that they aren’t willing to kill others.”

Carter, who has over 30 years of experience in campus safety, said that after the investigation itself, communication with the public should be law enforcement’s most important task. It took the Moscow police three days to hold a press conference, which Carter believes should’ve happened earlier.

He also said that new information should be released at the beginning of the press conference. Some of the information, including details about two of the victims’ surviving roommates and friends present at the scene, was only released in response to reporters’ questions.

“The way you keep confidence is by having a clear strategy, which has been lacking here,” Carter said. “Otherwise, people take law enforcement less seriously, students want to leave town, and they don’t trust that they might not be targeted.”

This lack of confidence has been expressed publicly by some of the victims’ families.

On Instagram, Aubrie Goncalves, Kaylee Goncalves’ sister, wrote last Wednesday, “To the students of the University of Idaho that are still staying around campus, leave. Your grades are severely less important than your lives.”

Jim Chapin, Ethan Chapin’s father, issued a statement last Thursday saying, “There is a lack of information from the University of Idaho and the local police, which only fuels false rumors and innuendo in the press and social media. The silence further compounds our family’s agony after our son’s murder.”

The University of Idaho declined a request for comment.

Aaron Snell, communications director for the Idaho state police and the designated public-information officer for this case, told The Chronicle that the Moscow police is a small agency with a little over 30 officers and that all officers are actively working on the investigation, including the chief of police.

Snell said that the agency wasn’t intentionally omitting information during the first couple of days. Rather, “the focus was directed at the investigation,” he said. “It was a lesson. We now have a PR team to respond more appropriately.”

The Moscow police has started to provide daily news updates on its website and Facebook page. The department is working on building community trust. “It’s going to take consistency in messaging and making sure the community knows that we care and that we want to be as transparent as possible.”

Carter, from SAFE Campuses, said that “the university can’t and shouldn’t interfere with the law-enforcement investigation. They can ensure through their own communications channels that accurate information is being communicated,” he said. “They have the opportunity to verify information to eliminate rumors from circulating.”

What they can do, according to Carter, is increase visible security on campus, offer safety escorts, and double-check that the procedures they have to secure their facilities, especially housing, are being upheld.

C. Scott Green, the university’s president, said in a press conference that the university has increased security patrols on campus and has benefitted from Idaho state police presence in the area. The institution ensures all residence halls are locked 24 hours a day and are only accessible to those who live in the buildings. All guests must be accompanied by a resident of the building, and each residence hall has a dedicated resident assistant staff and a live-in resident director, who perform safety and security rounds every evening. A safety escort is also available 24 hours a day to all students.

‘Up to the discretion of the instructor’

Classes were canceled the day after the crime, and university officials said in a news conference that they supported students who chose to leave campus early. They asked faculty to work with those students and said their absences would be excused.

“We were told to be flexible,” said Caitlin Cieslik-Miskimen, an assistant professor of journalism and mass media at the University of Idaho. “We ultimately had a say in how our courses were delivered based on what made us comfortable and what was best for our students.”

Last week, Cieslik-Miskimen had planned to hold individual meetings to speak with students about their final projects. She told students that they could reschedule the meetings or move them to Zoom. “And I wouldn’t penalize them if they didn’t show up,” she said.

For a public-relations and advertising course, Cieslik-Miskimen held an in-person class on Wednesday morning but offered remote attendance via Zoom and recorded the lecture. “I didn’t take attendance or really require anyone to be there. I had about five out of my 13 students in the class show up in person, and then three or four online.”

“All of my students have been rattled, to some extent. All of them are nervous,” Cieslik-Miskimen said. “It’s the uncertainty. It’s not knowing. And honestly, the gruesomeness of the crime that was committed. It has really unsettled everyone on campus.”

“From a faculty standpoint, as much as we would like answers and we would like this to be solved, knowing that the administration is providing us with some guidelines for how we should be conducting ourselves has been really helpful,” she said.

The administration encouraged faculty to have some sort of hybrid solution to accommodate students who do not feel comfortable going back to campus after Thanksgiving break.