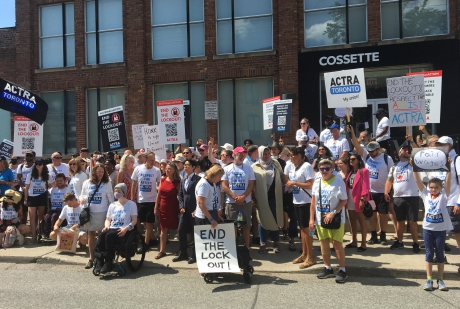 #Solidarity with Alliance of Canadian Cinema, Television and Radio Artists (ACTRA) workers who held a rally in front of Cossette Communications in Toronto, one of the commercials ad companies that has locked out these unionized actors.

Cossette is one of a group of companies that proposed outrageous changes to the collective agreement at the bargaining table including a 60% wage cut, no retirement contributions and no benefit plan. ACTRA refused to accept this bald-faced union busting and its members were locked out.

Toronto ACTRA president, David Gale, highlighted the hypocrisy of the claim of diversity and inclusion by Cossette, and the fact that it is the BIPOC and marginalized ACTRA members who are most impacted. He also highlighted that fact for all members commercial work is precarious, even though ACTRA members faces and voiced would be familiar to everyone who sees TV ads. He vowed that the union would continue the fight to protect members from the greed of corporations like Cossette using the uncertainty of the pandemic to attack them.

A large contingent of striking OPSEU safety inspectors joined the rally as well as other labour supporters.

For information about this lock-out: actra.ca