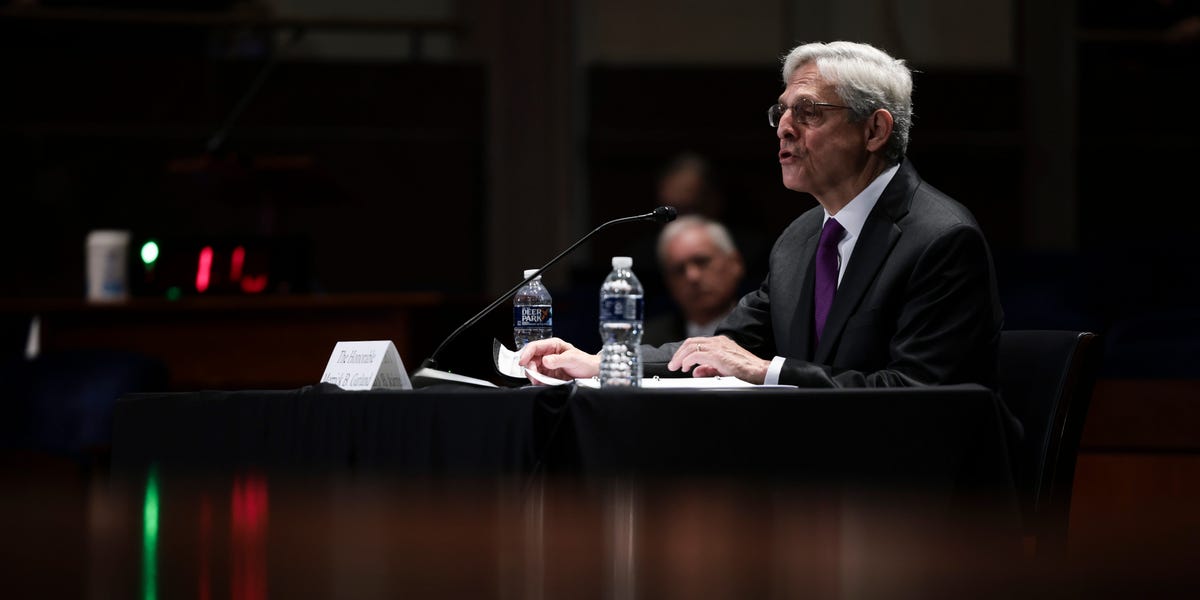 Just a day after a violent mob stormed the US Capitol, Joe Biden stepped to the podium as president-elect and presented Merrick Garland as his pick to steady the Justice Department and steer it away from the politicization and chronic turmoil of the Trump era.

Democrats have been living with that choice ever since — and they’re not always loving the results.

In the eight months since his confirmation as attorney general, Garland has proven himself as anything but a politically-attuned firebrand. His measured, mild-mannered approach has stuck with him from his quasi-monastic past life as a federal judge, and frustration among some Biden’s allies has only grown as they experience Garland’s methodical ways of running a DOJ that must reckon with the Trump years and an invigorated onslaught of partisan political attacks.

“He’s been out of the hurly-burly for 25 years,” a former top Obama administration official told Insider. “It’s hard to get back into the arena. I think that’s part of the problem here.”

Garland’s political limitations were well noticed during a recent round of congressional oversight hearings.

Both House and Senate Republicans put Garland on the defensive as they grilled him about a Justice Department initiative to address threats of violence and harassment against teachers, school administrators, and local school board members.

His GOP critics claimed Biden’s administration was seeking to silence parents concerned about school policies. Garland responded by repeatedly stressing how the DOJ was focused on keeping the public safe and not crimping speech protected by the First Amendment and Supreme Court precedent.

In those tense exchanges, some Democrats and former Justice Department officials told Insider they thought Garland missed an opportunity to more forcefully respond to Republicans and even challenge them on their strategy of turning local education into the latest front in the culture wars.

“He didn’t do great, but a huge factor is that he’s never been the type of individual that plays the political show that Republicans play,” a Democratic Senate aide told Insider. “We learned a lot from that oversight hearing.”

Others agreed that Garland went on the defensive in spite of having the politics on his side.

“I don’t think it’s his natural style,” Miller added, “to be a pugilistic fighter.”

Garland’s style as attorney general has only fed the perception that he still embodies the role of a federal judge who has a natural inclination to show impartiality in the face of partisan attacks.

Not content with a high-level briefing, Garland is known to read case law himself and even inquire about the judges handling various matters. His interest in that level of detail is uncommon for attorneys general, according to people familiar with his approach.

“He seems incapable of making decisions,” the former top Obama administration official said, adding: “He’s running it like it’s a chambers, where he’s going to have to write an opinion or something.”

On his staff, Garland has surrounded himself with Capitol Hill veterans and aides recruited from the vast and loyal network of law clerks who worked for him over 23 years on the DC Circuit US Court of Appeals. The presence of past clerks has played into the impression that he’s still operating like a judge.

“He’s been a judge, where people are super-nice to you all the time,” the former Obama administration official said. “No one really questions you. Somebody might write a dissent, but it’s an academic dissent.”

Garland’s methodical approach has grated on Capitol Hill Democrats who bemoan delays that hurt their desired policy goals. For example, Sen. Dick Durbin, an Illinois Democrat and chairman of the Senate Judiciary Committee, criticized Garland’s Justice Department last month for not yet rescinding a Trump era memo arguing that federal prisoners released in light of the pandemic should be returned to custody.

Durbin and Sen. Cory Booker, a New Jersey Democrat, sent Garland’s Justice Department a letter urging it to rescind the memo. Six months later, they had not received a response, Durbin said. On Tuesday, Durbin called on Garland to replace the Trump-appointed head of the Bureau of Prisons, Michael Carvajal.

Garland’s Democratic critics acknowledge that his style is what Biden signed up for.

He brought to the DOJ a reputation as an independent and fair-minded judge who sat for nearly a quarter-century on the prestigious DC-based federal appeals court. Biden himself framed Garland’s nomination as the embodiment of his stated goal of restoring the Justice Department’s reputation and independence after seeing Trump look to the nation’s highest law enforcement agency as if it were his personal law firm.

That transition from the Trump years has led to occasionally tense relations between the Garland-led Justice Department and White House. When Biden said he hoped the DOJ would prosecute those who defy subpoenas from the special House committee investigating the January 6 attack on the Capitol, Garland’s spokesperson shot back that the department would “make its own independent decisions in all prosecutions based solely on the facts and the law.”

Tensions have only persisted as legal experts wonder why Trump himself hasn’t been charged with any federal crimes when local prosecutors in New York and Georgia keep the heat up on the former president. “Where oh where is Merrick Garland?” Laurence Tribe, a legal scholar who taught the attorney general at Harvard Law School, mused recently on Twitter.

The Justice Department brought the first such prosecution on Friday with the indictment of Steve Bannon, a close Trump ally who refused to testify or turn over documents as part of the House investigation. Announcing Bannon’s indictment on contempt of Congress charges, Garland said the prosecution reflects the DOJ’s “steadfast commitment” to following the facts and the law.

Garland made a similar defense as the DOJ continued to back Trump against a defamation case brought by E. Jean Carroll and later when it challenged a court decision requiring the disclosure of a memo former Attorney General William Barr cited in deciding not to charge Trump with obstructing the Russia investigation. Both decisions drew criticism from Democrats eager for the new Justice Department to hold Trump accountable.

The consternation conflicts with Garland’s first priority of restoring the Justice Department’s reputation as an apolitical body, said Miller, the former Holder spokesman.

“That had to be goal No. 1 above anything else, and I think he’s accomplished that,” Miller said.

“Where he’s still learning,” he added, “is in how to be the public face of the department and defend its work and defend its priorities, especially when attacked by people who have no interest in having a reasonable conversation with you. If we’re having the same conversation a year from now, it will be a problem.”