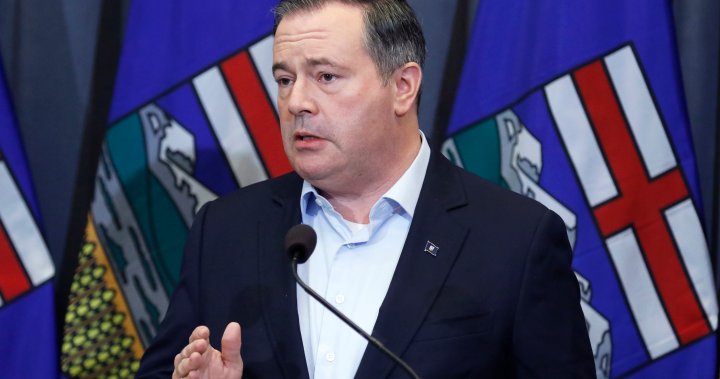 Alberta Premier Jason Kenney says he believes the province should be able to start “significantly relaxing” public health measures once hospitalizations from the Omicron variant of COVD-19 decrease.

In an interview with The West Block‘s Mercedes Stephenson, airing in full on Sunday, Kenney said he expects the severity of the virus will only decrease in future variants that may emerge.

“Once we start to see sustainable reduction in our hospitalizations from Omicron, then I think we can move to begin significantly relaxing public health measures,” Kenney said.

“And if Omicron acts like, for example, the Spanish flu or any other similar contagious viral respiratory virus, I think we can expect to see decreasing severity in future variants, which should bode well for the future.”

He added that he believes, “we have to just learn to live with this.”

‘Difficult to say’ whether Omicron will lead to end of COVID-19 pandemic: PHAC

Kenney pointed to an article in The Lancet medical journal earlier in the week, which looked at indications from South Africa that reinfections after an individual gets the Omicron variant may be milder than the initial infection.

However, a commentary published by other researchers in response argued the experience of South Africa, which has a demographically young population, won’t necessarily be the same elsewhere.

“This report of typically milder disease following infection with the omicron versus delta variant in South Africa is encouraging, but we should not assume that omicron variant epidemics will have such a low health effect elsewhere,” the commentary in The Lancet noted.

As of Thursday afternoon, Alberta had 64,519 active cases of COVID-19 within its borders, though public health officials have indicated they believe the real number is at least 10 times greater than that since very few people remain eligible to receive a PCR test to confirm their status.

There were 1,131 people in Alberta hospitals with the disease and 108 of those were in intensive care units. Speaking at a news conference Thursday, Kenney said while the situation remains concerning and the health-care system is under significant strain, it appears the number of new cases each day is beginning to plateau.

Kenney said his government expects the number of people in hospital to continue to rise for several weeks, likely reaching or exceeding 1,500 COVID-19 patients in non-ICU beds by the end of the month.

Alberta currently employs its own version of a vaccine passport program that allows businesses to opt in to it if they would like to offer services like eat-in dining. Some new restrictions were brought in just before Christmas when the Omicron variant of COVID-19 began to sweep across the province.

Kenney’s response to COVID-19 has polarized some members of his United Conservative Party and drawn criticism from different camps within it, particularly during the pandemic’s fourth wave in the fall.

Some have openly criticized him for infringing on individual rights by bringing in too many public health restrictions while others have argued he has not taken enough action to prevent the coronavirus’ spread.

Kenney is due to face a leadership test on April 9 in Red Deer.

If he receives less than 50 per cent of that vote, he will no longer be party leader.

The question of whether the highly-infectious Omicron variant will begin to shift the pandemic towards an endemic state has dominated conversations among scientists and public health experts over the past month as the variant fuelled new spikes and case records around the world.

Because it is more transmissible, that means it can “outcompete the other viruses,” like the more deadly Delta strain, pushing them further and further out of the picture.

What will it take to go from pandemic to endemic?

It also ticks the second box when it comes to endemicity, according to Evans: Omicron “produces a milder form of illness.”

“For any virus to become endemic, it cannot be killing off the population of hosts that it infects,” Evans said.

Altogether, Omicron is “rapidly increasing” the amount of immunity around the world, Evans added, “especially” when combined with vaccination.

“We know that for Omicron, we could have some immunity for some time. But it doesn’t protect against other variants and virus strains — so it can help a little bit for some time, but it’s not a long-term herd immunity,” Njoo explained.

“With vaccination, we know that (vaccines) are very effective to protect people against severe illness but with Omicron, we’ve seen it’s not as good against infection and transmission.”

COVID-19 vaccines for truck drivers ‘right thing to do,’ Duclos says as mandate kicks in

There is also no way to rule out the potential for other, more severe variants that could emerge — particularily due to the sheer amount of people that Omicron is infecting.

Each new person infected is a new chance for the virus to mutate, the World Health Organization has cautioned.

In an interview last week with Stephenson, the WHO’s Dr. Peter Singer stressed that until more countries are able to vaccinate larger portions of their populations, the world will continue to see the emergence of new — and potentially more dangerous — variants.

“If we keep doing what we’re doing, unfortunately, it is possible — even likely — that there will be another variant and we won’t be ending the pandemic,” he said

“In terms of what those future variants will be like, it’s very hard to know that in terms of transmissibility, in terms of virulence. But it’s certainly possible that the next one — the next letter in the Greek alphabet, by the way, is Pi —  that Pi could be worse than Omicron.

“That’s why it’s so important for us to act.”

— with files from Global’s Phil Heidenreich and Rachel Gilmore.

7:02
‘Vaccinate the world’ to end emergence of variants

‘Vaccinate the world’ to end emergence of variants