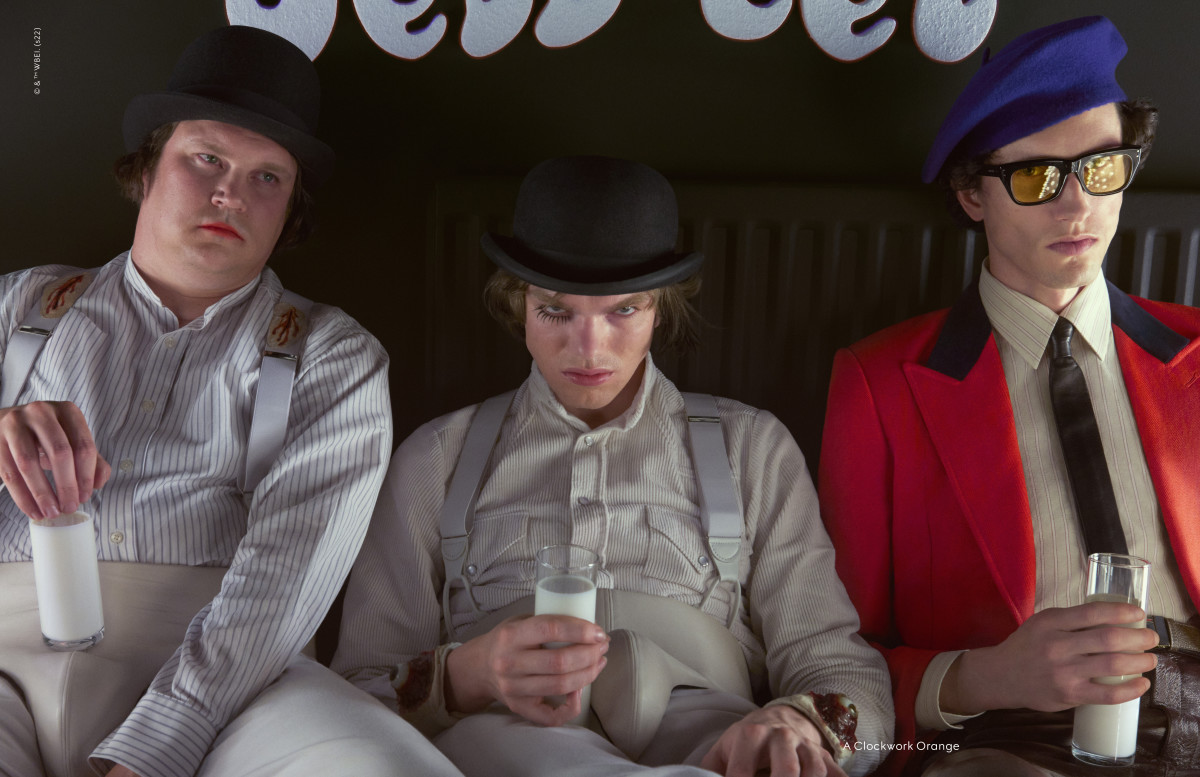 Alessandro Michele doesn’t just design — he creates intricate, imaginative worlds,  with their own mythology and lore, whether they exist within a Gucci runway show, a glossy ad spread or a star-studded film series. It’s what has made him one of the most delightful, entertaining creatives working in the industry today. For his latest campaign, he turned to another visual-storytelling great to weave a new narrative on his Exquisite collection for the Italian fashion house.

Gucci’s Fall 2022 campaign, photographed by Mert & Marcus and released on Thursday, sees the Michele-fication of some of Stanley Kubrick’s most well-known films — “2001: A Space Odyssey,” “A Clockwork Orange,” “Barry Lyndon,” “Eyes Wide Shut” and “The Shining.” Models wear both Gucci Fall 2022 (the collection that introduced its collaboration with Adidas) and recreations of original costumes by Milena Canonero and Charlotte Walter. (Michele worked with the former on this project.)

In a lengthy letter released alongside the imagery, Michele wrote that he’s “always been charmed by cinema,” and that he’s “always imagined [his] collections as films able to convey a cinematography of the present: a score of stories, eclectic and dissonant, that can sacralize the human and its metamorphic ability.” He explained he’s a longtime fan of Kubrick’s, describing him as “a philosophic filmmaker who, better than others, emanated the magic of that inextricable knot through which cinema exudes life and magnifies it.”

The Exquisite campaign builds on Michele’s longstanding project at Gucci of “[mingling] high and low,” he continued, bringing iconic imagery from pop culture into his imaginative world of fashion. You can read the letter in full, below.

I’ve always been charmed by cinema. For its power to tell stories that can probe human adventure and its drift. For its visionary power to dig up in the real, making it vertiginously imaginative and questionable. Such a careful look on the human, after all, is so close to me. I could never imagine clothes as severed from the story and life of the person wearing them. If you ask me, a garment is not, and never will be, just a piece of fabric. It’s rather the means through which we are able to unfold who we really decide to be, it’s how we shape our desires and the ultimate sense of our staying. That’s why I’ve always imagined my collections as films able to convey a cinematography of the present: a score of stories, eclectic and dissonant, that can sacralize the human and its metamorphic ability.

The ‘Exquisite’ campaign is my tribute to cinema and to one of its brightest maestros, Stanley Kubrick. A philosophic filmmaker who, better than others, emanated the magic of that inextricable knot through which cinema exudes life and magnifies it. I’ve always admired Kubrick’s remarkable capacity in tackling very different subjects. His experimental drive goes beyond any possible categorization. Every film, in fact, digests the manifold souls where dystopia meets parody, drama becomes human comedy, horror looks like a psycho-philosophic treatise, the feeling of truth evolves into the uncanny. Kubrick was, in essence, a real sculptor of genres: the ‘cross-genre’ director, ahead of his time. His ability to build stories that exceed significance, crossing borders and setting labels on fire, has always been deeply inspiring to me.

As an act of love, I decided to reinhabit Kubrick’s films, pushing to the core this incendiary approach. I took the liberty of disassembling, blending, grafting and reassembling them. Sticking to my creative praxis, I seized those movies, resemanticizing them, populating them with my clothes. Trying to create short circuits where the adidas gown, that had already lost its status of sportswear to become a Victorian costume, appears as a new character in the script of ‘Barry Lyndon.’ The dress designed by Laura Whitcomb, wearing which Madonna grabbed the New York spotlight in the nineties, fits in the gothic scenes of ‘The Shining.’ The mysterious darkness of the enigmatic ritual of ‘Eyes Wide Shut’ embraces a venus in fur, embellished with sensual bourgeois pearls. And more, the 90s shoes with a fetish flavor explode through the frames of ‘A Clockwork Orange.’ Finally, the dreamiest evening dress dangled in soft tulle ruches bursts into the aseptic and dystopian space of the Discovery One in ‘2001: A Space Odyssey.’ This situationist game mixes historical plans, references, experiences. The past explodes into the present. Everything can become anything, or something else. As in that famous scene of Kubrick’s masterpiece, where the bone turns into a spaceship. As in life.

With ‘Exquisite’ I carry on my attempt to mingle high and low, this time coherently and synergistically with the grammar of the great director. In the selected sequences it feels like Nietzsche, Kant and Freud speak casually to the people in the street. The biggest questions about the meaning of life become pop images. Complex transfigurations in terms of significance, get immediate accesses in terms of experience. Everything comes to be iconic, symbolically sophisticated, though able to reflect on a culture that we can definitely identify as pop. I chose Kubrick also for this, after all. What he created is part of our collective imagination. Since he was a diviner of vision, his works are as recognizable as the Sistine Chapel, the Virgin of the Rocks or the Simpsons. Manipulating his images, inside a brand new semantic framework, is like hacking ‘La Gioconda.’ Plus the inspiration and the empathy only possible through the fictional cinematographic machine.

This involvement generates a change of state that is very significant for my job: clothes get closer to bare life again. They turn into highly imaginative functional prosthesis, and they do so to tell a story. A story that shatters, enchants, tortures, ignites. Because it’s the story of the human that dwells in each and every one of us. As Stanley Kubrick knew too well. And also Milena Canonero, a very dear friend of mine, who accepted my invitation to go back over some of the scenes that hailed her as undisputed star in the history of costume design. Her presence in this project is moving for me, a very precious gift.

And see all the images from the Gucci Exquisite campaign in the gallery below.

Sign up for our daily newsletter and get the latest industry news in your inbox every day.