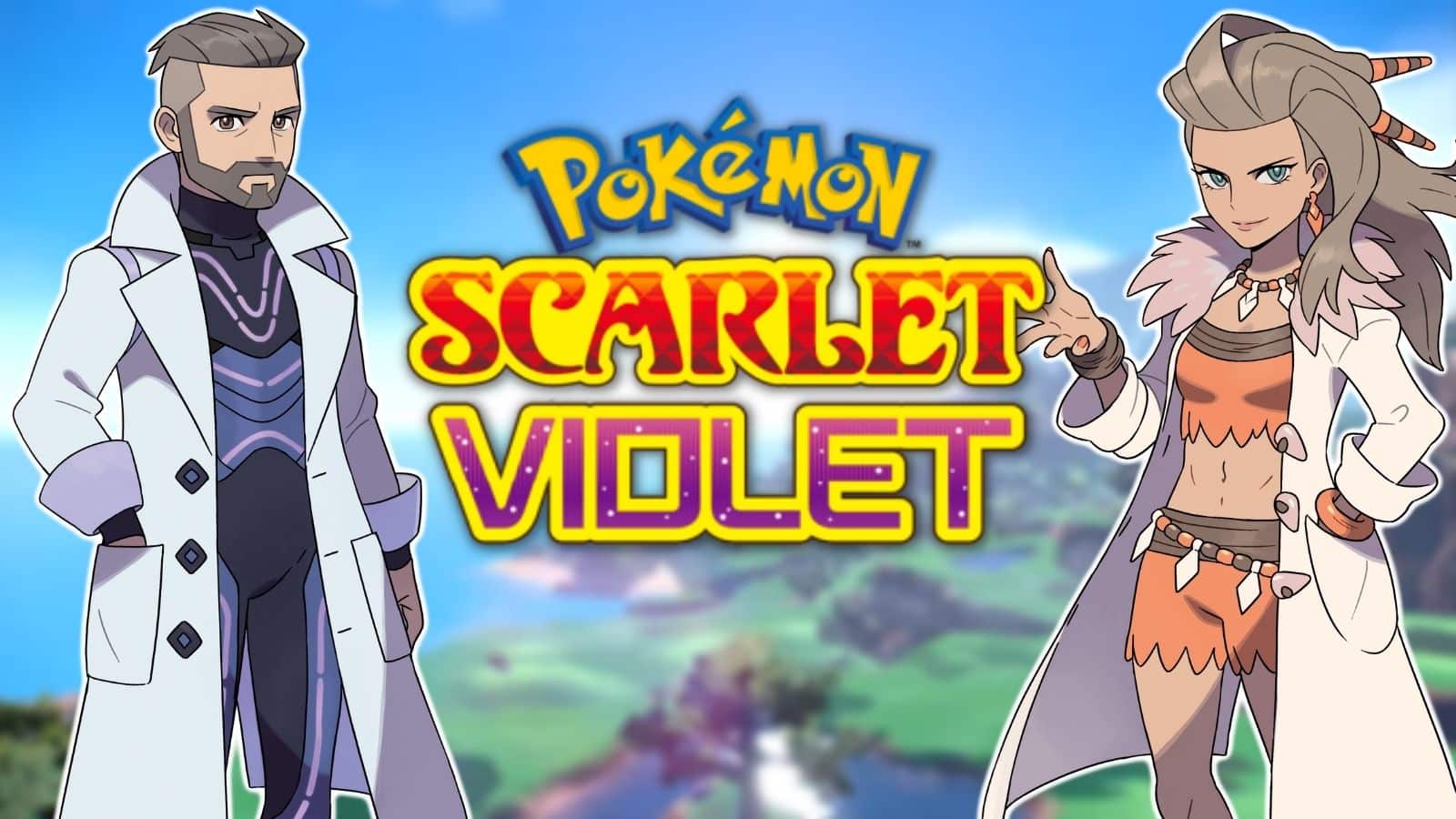 Pokemon Scarlet & Violet have revealed various new characters who will populate the new region, including two new professors and the newest rival trainer.

Pokemon Scarlet & Violet’s second and third trailers revealed a ton of new information for trainers to dig into, including brand new game features and a bunch of new pokemon, like Lechonk.

While players will be able to meet plenty of new Pokemon on their journey through Pokemon Scarlet & Violet, they will also encounter plenty of other trainers and people to interact with.

This includes new friends and rivals, new gym leaders, the addition of two new professors that will be version exclusive, and many more.

Like other mainline Pokemon entries, players can choose their preferred appearance in Pokemon Scarlet & Violet.

First up, there are the main characters of Pokemon Scarlet & Violet.

The main characters in Generation 9 are transfer students in the Paldea region attending either Naranja or Uva academy, depending on the version chosen.

Depending on the version chosen, the starting school uniform for the main character will change though players will be able to customize their appearance and clothing to their liking as the game progresses.

Trainers who choose Pokemon Violet will begin dressed in a dark grey hat, a grey shirt with a purple tie, purple shorts, and brown shoes with yellow accented black socks.

Professor Sada will help guide trainers if they have chosen Pokemon Scarlet.

Next up, there’s Professor Sada who will help guide players through their Pokemon journey if they have chosen Pokemon Scarlet.

While we don’t know too much about Professor Sada just yet, she appears to be designed with a more tribalistic style in mind.

She wears a necklace with what appears to be beads and pieces of rock or bone strung along with it. Additionally, she wears a tattered orange top and shorts under her lab coat.

Professor Turo will help guide trainers if they have chosen Pokemon Violet.

Generation 9 is the first entry in the mainline games to feature exclusive professors depending on what version is purchased.

As for Professor Turo himself, his design is heavily futuristic featuring a sleek jumpsuit with neon purple accents across it. Again, this coincides with Miraidon, the box Legendary Pokemon for Pokemon Violet.

While no concrete details about Turo’s personality have been revealed just yet, the Pokemon Scarlet & Violet website does say that “Each [professor] is carrying out research into certain lore passed down in the region.”

Mr. Clavell is the Director of Naranja/Uva Academy, where the player begins their journey.

Thanks to Pokemon Scarlet & Violet’s third trailer, we know that the protagonists’ journey will begin at an academy.

Mr. Clavell serves as the Director of Naranja and Uva Academy, depending on the version players choose.

Since players will be transferred to the academy, Mr. Clavell will take the liberty of showing players around the school when they first arrive.

According to Pokemon Scarlet & Violet’s official website, Mr. Clavell “He can be strict, but he can also be kind. He seems to be a friend of Professor Sada and Professor Turo.

Mr. Jacq serves as the main character’s homeroom teacher at the academy and is in charge of teaching biology.

The official website says “He is very knowledgeable about Pokémon biology and is the developer of the Pokédex app for the Rotom Phone.”

Coinciding with Mr. Jacq’s sloppy appearance, it seems he is a bit of an airhead and he often tends to lose himself in his research.

It seems like Nemona will act as the player character’s rival through Pokemon Scarlet & Violet.

Then there’s Nemona, who is the player’s friend in Pokemon Scarlet & Violet. She has “a sunny and energetic disposition” and is very skilled when it comes to Pokemon battles.

The Pokemon Scarlet & Violet website, “She’s an experienced Pokémon Trainer and serves as a reliable guide for you on your adventures.”

However, Nemona does have a weak spot as apparently “she’s not the best at throwing Poke Balls.”

This could have to do with the wrist brace-like accessory she wears on her right arm.

Arven is an upperclassman at the academy who struggles with Pokemon battles but excels at cooking.

Arven is the main character’s upperclassman at the academy who has a fondness for cooking.

However, unlike Nemona, Arven struggles with Pokemon Battles and prefers to use his time researching healthy recipes to help Pokemon feel better.

It seems as Arven will come to rely on the player character due to his lack of skill with battling.

Penny is a trainer in the same grade as the main character at the academy and is a bit shy.

Penny is a fellow student from the academy who is in the same grade as the protagonist.

Penny has a shy personality and is often absent from the academy.

The official website says Penny “is especially fond of her fluffy Eevee bag and always has it on her back.”

Grusha was once a professional snowboarder in the Paldea region but now serves as a Gym Leader full-time.

The third trailer for Pokemon Scarlet & Violet showed fans that gyms are returning in Generation 9.

Gym Leader Grusha will helm the Glaseado gym and specializes in Ice-type Pokemon.

Apparently, he was once a professional snowboarder in Paldea but now serves as the full-time Gym Leader in Glaseado.

As for Grusha’s personality, he is usually cool and collected but shows off fiery emotions once battles start to get heated.

There you have it! That’s every character we know of in Pokemon Scarlet & Pokemon Violet. There will no doubt be plenty more Pokemon trainers that players will come across during their journey through the new region of Generation 9, so be sure to check back here for the latest updates.

Check out some other Pokemon Scarlet & Violet guides below: