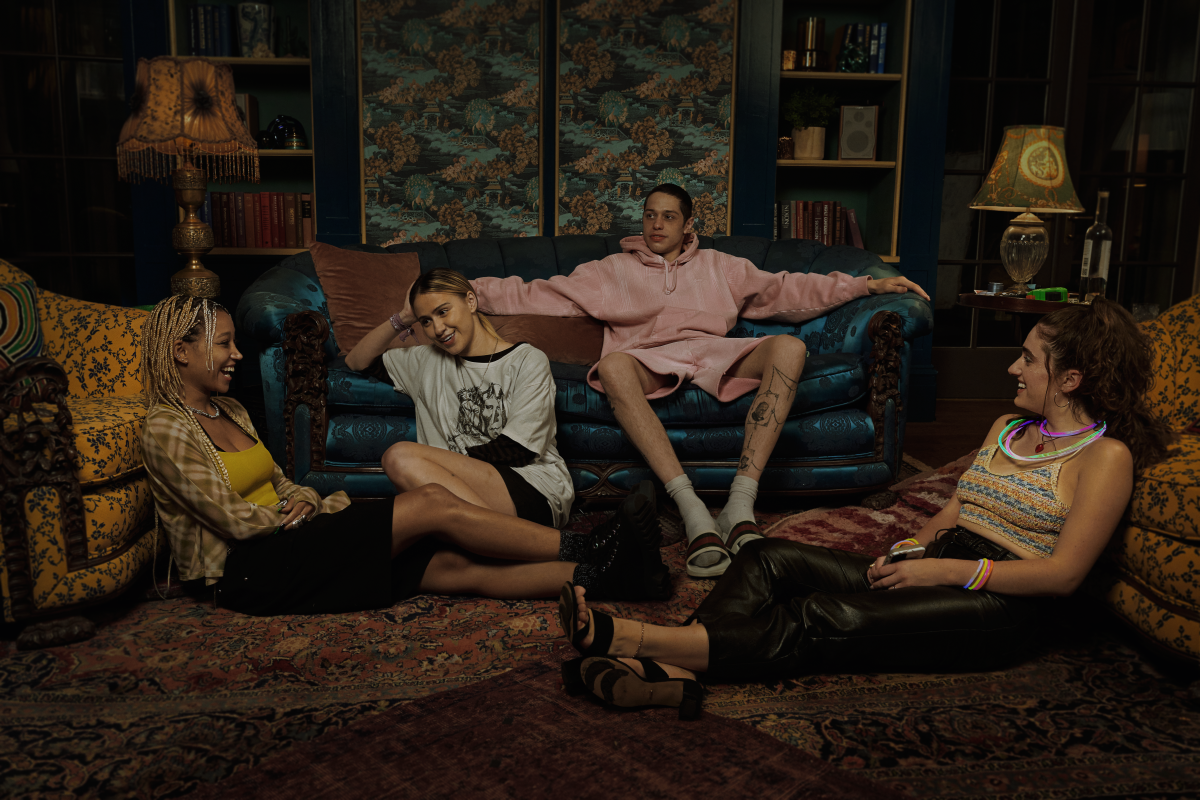 “You don’t have to be nervous,” says Sophie (Amandla Stenberg), attempting to reassure her apprehensive new girlfriend Bee (Maria Bakalova) in an opening scene of the A24 slasher-thriller comedy “Bodies, Bodies, Bodies.” The two are driving to Sophie’s best friend David (Pete Davidson)’s upstate New York mega-manse (technically his one-percenter parents’ estate) for a grown-up sleepover amidst an impending hurricane. Feels ominous, right?

For director Halina Reijn’s thrilling, bloody treatise on Gen-Z social — and social media — dynamics, Danabassis kicked off her research process in the cohort’s natural habitat: Instagram. “I felt like that was the necessary place to start,” Danabassis says.

With the hurricane beginning to rage outside, Sophie and her friends engage in a “Mafia”-style game called “Bodies, Bodies, Bodies.” But as the group tries to unmask the pretend killer, their bubbling resentments, rivalries and deep-seated insecurities surface. The cut-throat revelations and accusations feel especially decisive to a generation fixated on how they present themselves (and are seen) online. Obviously, the 20-somethings are dressed for it, too, whether they’re doing a TikTok dance or running from a real killer, who’s picking them off one by one in the sprawling mansion.

Like arranging clues, Danabassis considered multiple factors in determining the ideal character-building costumes for each of the leads, who slowly reveal themselves as the story — and suspense — intensify.

Ahead, Danabassis takes us through each of the main characters, as you guess who the killer is and who will survive the night.

Low-key super-rich Sophie — who’s been silent on the group text — surprises her friends when she arrives at the party. Her Gucci logo tote, with a chunky gold chainlink strap, hints at her parents’ vast net worth, but her multi-layered outfit feels like a metaphor for her true loyalties and troubled past, to be slowly revealed: a neon yellow Zara tank, black bra peeking out, topped by an Asos long-sleeve plaid shirt and an oversized Uniqlo zip hoodie.

“I wanted Sophie to feel a little bit gamine,” says Danabassis, who also infused tough, sporty and vulnerable elements. “She could get down and dirty, but also there’s a sex appeal.”

Filming took place last year, so Danabassis was actually ahead of trends in shopping Sophie’s H&M shorts, a style now worn by celebrities from Bella Hadid to Meghan Markle. “The long trouser shorts elevated the look,” she says.

Danabassis conveyed tenacity through Sophie’s rugged patent-leather boots by Kickers: “In the dark, [the boots] could pick up light… She’s more out-there and takes more and more risks.”

Bee is the working-class, Russian immigrant outsider venturing into the viper’s nest of affluent, debaucherous, backstabbing friends. She assesses the group as they chug Veuve Clicquot (pilfered from the high-end wine cellar) and snort lines like it’s an ’80s Bret Easton Ellis novel.

“Bee’s a practical, pragmatic character,” says Danabassis. “She’s not into anything frou frou.”

The costume designer took inspiration from French model and Demna Gvasalia muse Yuri Escudie for Bee’s long shorts from Aritzia, Dickie’s work shirt and graphic tee designed by multidisciplinary artist and punk musician Andrea Lukic. The latter features a drawing of two sides of one face, which hints at a duality — and perhaps duplicity. (Like, is Bee who she says she is? Is anyone?) Danabassis was drawn to how the artwork expressed Bee’s personality: “There’s a noir to it, and it’s kind of dark, and there’s a femininity about it, but it’s also a little bit ugly, in an amazing way. Bee’s not afraid to just make something off-kilter. I really liked that for Bee, because there’s a DIY-ness to her character.”

Danabassis also incorporated a little sartorial foreshadowing with Bee’s purple bandana bracelet, which lingers on-screen as she places her hand on the bannister while exploring the expansive house. The bracelet’s bold hue is a wink-wink nod to the title of a popular industry book, “If It’s Purple, Someone’s Gonna Die: The Power of Color in Visual Storytelling” — and series of events to come.

Tragically self-unaware podcaster Alice is dressed for the occasion in a rainbow crochet halter top from Zara, leather jeans from Aritzia and strappy slides with a stacked heel that look cute, but still allow for running for one’s life. She also brings an out-of-place date for the weekend: Greg (Lee Pace), a 40-year-old she recently met, maybe on Tinder.

“We wanted her to feel sexy because she’s got this date, like she’s trying to be hot and sexy for Greg,” says Danabassis. “Also, what do you wear to a party upstate? Like, do you dress up? It’s like she’s really going for it.”

The tactile outfit — with the textured patterns on top and glimmer from the pants — also complement Alice’s glow-stick necklaces and bracelets, which catch (or even just provide) light as the body count rises. The metallic pink cowboy hat she wears for a brief moment also captures the carefree recreational-drug-enhanced euphoria that quickly dissipates.

“It’s silly,” says Danabassis. “She’s just a silly girl and she’s very funny, and that’s why she could pull off the craziness of those glow sticks with her outfit. It’s somehow works all together in the chaos.”

Emma’s buttercream yellow Zara sundress — with the ruching and delicate ribbon at the ’90s-style square neckline — speaks to her people-pleasing nature and the picture-perfect image she wants to convey. She’s the actor of the group (although, her passive-aggressive friends seem to have mixed reviews on her performance in “Hedda Gabler”), and as the soon-to-be deadly game heats up, asshole boyfriend David accuses her of having no originality (and overusing Twitter buzzwords), thus sending Emma into a fit of tears.

“It’s this vulnerability thing,” says Danabassis. “She has so many vulnerable moments and she gets really dark, but she’s always trying to maintain this positivity. The colors for her were just really sweet and light.”

But Emma’s full schoolgirl-referential look is also a power move: “For that outfit, it really is all about the shoes. She’s supposed to be a wealthy girl, so she’s wearing those patent Miu Miu Mary Janes; the ankle socks with metallic lamé threading are just an extra little style point.”

Despite being a longtime group member, Jordan has a big chip on her shoulder, and sees herself as an outsider. She and Sophie also seem to have some sort of past connection.

Jordan has “a boldness and a braveness,” says Danabassis. “She’s pays no mind. She’s just comfortable with her body.” When she climbs out of the pool to reluctantly greet Sophie and Bee, for example, she’s actually wearing her bra and thong underwear, not a pool-ready bikini.

Jordan also cares the least about dressing up for a hurricane party, and definitely isn’t interested in adorning herself for the male gaze. After shedding her vintage-esque sweatshirt during the first bloody demise, she reveals a black athletic-style cut-out tank top by Sandy Liang and wide-leg chinos. The ensemble feels tactical-chic, especially when Jordan resourcefully dons a headlamp to maneuver through the house.

“There’s a militant thing to it,” says Danabassis. “It just hits the trends that are happening, but also feels natural and believable — purposeful naturalism.”

Danabassis recalls her conversation with the internet’s boyfriend about how he envisioned his geriatric millennial character: “He’s like, ‘Greg is just down for a good time, and he’s just there to have fun.'”

Shirtless, Greg successfully sabers a bottle of champagne with David’s dad’s Gurkha sword, impressing the young women and threatening the fragile David. His straightforward elastic-waistband swim trunks and acid-washed hat suggest that he feels easygoing and effortless in his masculinity. Changing for the evening festivities, Greg dons a striped short-sleeve button-up shirt from Urban Outfitters.

“His shirt is this natural cotton or linen that hits that note of ‘natural man,’ maybe a wiseness,” says Danabassis. “Like, he’s been through some stuff.”

Greg later takes a break from the backbiting Zoomers, relaxing into a clingy, long-sleeve white thermal — which was actually Pace’s suggestion. Danabassis also  “doctored up” a pair of Reigning Champ sweat-shorts, “so he really looked good and hit a note of: still relevant, but older and a little bit outside of this whole world that they’re in.”

David — Sophie’s best friend and fellow idle ultra-rich kid (the others are just regular rich) — has a lot to prove. “He’s trying to be alpha, but he’s making up for something. He’s loud and obnoxious and cold, but he’s on trend and knows what’s cool,” says Danabassis, who landed on a designer streetwear aesthetic after discussing the character with Davidson.

“We ended up nicknaming it ‘the baby suit,'” she says of the pink Supreme hoodie and long shorts set, which she luckily found in multiples. Gucci slides with ratty athletic socks complete David’s clout-chasing look. (It also looks very Pete Davidson, who, interestingly, says to Sophie what seems like a meta BDE-referential line: “I look like I fuck. It’s my whole vibe.”)

“The pink was a funny touch and a bold choice,” says Danabassis. “If anyone can, Pete can pull it off.”