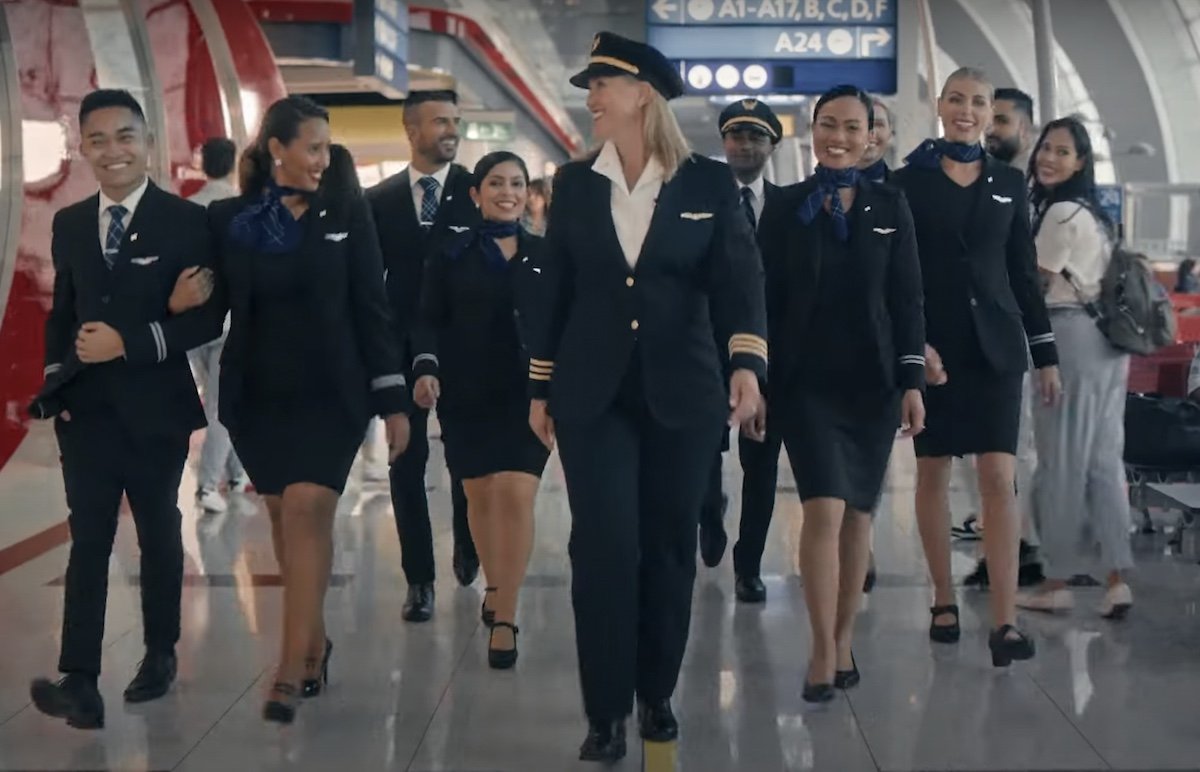 I don’t know why I find this to be so funny, but I kind of can’t stop watching this video and chuckling.

Emirates and United are now partnering

Last week Emirates and United announced a partnership. Symbolically this is a massive development, given the feud that historically existed between the “big three” US carriers and the “big three” Gulf carriers. Going back many years, I don’t think most would have seen such close cooperation between American and Qatar Airways, and between United and Emirates.

In terms of execution, I think most people were underwhelmed by this arrangement. It was marketed as a huge deal, but in reality the implementation here is lackluster — there’s not even full frequent flyer reciprocity, and the codeshare flights are limited. Aside from United resuming flights to Dubai, this is primarily an interline agreement with limited reciprocity.

Emirates and United are trying to sell glamour

To coincide with this partnership being announced, Emirates and United both published the same roughly minute-long video to their social media, with Frank Sinatra’s “Come Fly With Me” playing in the background.

This is a really cute and well done video, there’s just one issue — it has no basis in reality. I mean, remember when Emirates had that ad starring Jennifer Aniston, which showed her flying with a US airline? That’s a much fairer representation of your typical crew at a US airline.

Honestly, seeing an Emirates and United crew walk through the terminal is a night & day difference. Emirates crews have specific appearance standards (down to lipstick), specific luggage, they walk in formation, they can’t be on their cell phones, they can’t walk on planes with frappuccinos, etc.

Meanwhile on a long haul United flight, some flight attendants have a handful of carry-ons including lunch boxes, etc., which they’re carrying with one hand, while they’re yapping on their phone with the other hand. Some flight attendants take no pride in their appearance, and have wrinkled and untucked shirts, and look like they didn’t even brush their hair or shower.

Never mind the conversations they’re sometimes loudly having, whether it’s the pilots talking about vaccines, or the flight attendants talking about how much they’re not looking forward to working on a full flight.

Let me be clear, I don’t want to be sexist, or ageist, or lookist (is that a word?). The Gulf carriers “sell” appearance as part of the experience. US airlines don’t — after all, they repeatedly tell us that flight attendants are there primarily for our safety. And that’s totally fine, as I respect that US airlines offer flight attendants unionized careers with a lot of job security (which isn’t offered at Emirates).

But let’s not pretend this partnership is something that it isn’t. It’s important for the airlines to be real with themselves. To give some credit to a US airline, just look at American. The airline used to have the slogan “Going For Great,” but cut it, because… well… you know. Meanwhile American Airlines used to have clapping at the end of safety videos, but also cut that, because it seemed a bit too celebratory for flying with American Airlines.

Plain and simple, the partnership between Emirates and United gives Emirates passengers access to destinations in the United States, and gives United passengers access to India, Africa, etc. Nothing more, nothing less. So in my opinion the airlines should showcase pretty routes on a map, rather than this.

Emirates and United are two very different airlines, and that’s totally fine. What they have in common is that they’re both in the business of getting people from Point A to Point B. In marketing the partnership, I feel like the focus should be on connectivity, rather than suggesting that the airlines somehow share a love for the glamour of flying.

Anyone else find the marketing around this partnership to be strange and unrealistic?