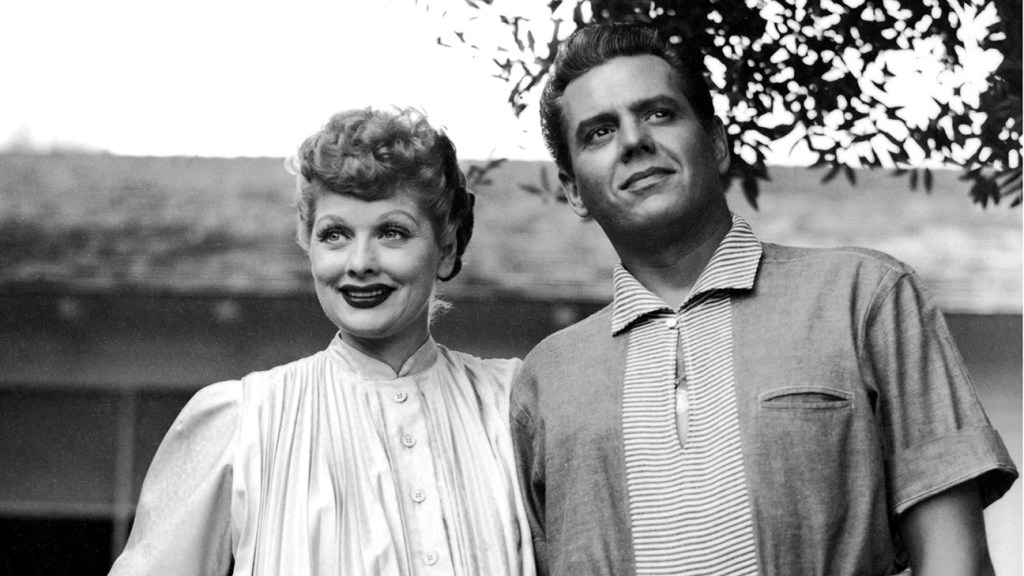 Among the rich selection of stills and footage in the unexpectedly affecting Lucy and Desi, there’s an image that might strike you with its likeness to the film’s director, Amy Poehler. The photo captures Lucille Ball, in one of her daffier getups, beaming at the camera: a wide-eyed, beautiful clown. More than 70 years after I Love Lucy transformed the airwaves, many people working in television can trace their inspiration to that trailblazing sitcom and its beloved stars. But Poehler brings a particularly powerful sense of connection and understanding to her debut documentary. Like Ball, she’s a funny woman with serious clout in the TV business. And she knows a thing or two about being part of a famous comedy couple whose marriage ended in divorce.

The considerable emotional impact of Poehler’s film is unexpected because the story of Ball and Desi Arnaz has been told many times before, most recently in a TCM podcast and Aaron Sorkin’s Being the Ricardos. Though they make many of the same points, Poehler’s doc and the Sorkin feature (both Amazon releases) land very differently. The drama toplined by Nicole Kidman and Javier Bardem feels like a research project in the guise of a feature film, whereas Poehler’s telling is energized by a personal edge, searing and sympathetic, as it traces career struggles, creative breakthroughs and formative sorrows.

A bright and piercing take on the belly laughs and the heartbreak.

With an insider’s perspective and access to Ball and Arnaz’s archives, Poehler zeros in on a showbiz love story. Beyond the pair’s romantic bond, there’s a postwar nation’s infatuation with them. Like a recent documentary about Dean Martin, a fellow megastar of the same generation, the film celebrates outsize talent while taking stock of something much quieter, an ache that isn’t necessarily remedied or even calmed by professional accomplishment. And like the Martin doc, which relies on the insights of one of his daughters, Lucy and Desi spends quality time with Arnaz and Ball’s firstborn, Lucie Arnaz Luckinbill. She offers searching and incisive testimony about her parents’ marriage and intertwined careers, citing “a cost to the success.” Her description of their final conversation, decades after they were each remarried, is wrenching in its simplicity.

Her brother, Desi Arnaz Jr. — whose 1953 birth was front-page news, paralleled by the precedent-setting pregnancy storyline on the second season of I Love Lucy — is heard from briefly, and there are sit-down interviews with Carol Burnett and Bette Midler, both of them not just ardent admirers of Ball’s but protégées. TV maestro Norman Lear offers a few discerning observations, and Havana-born playwright Eduardo Machado weighs in on Arnaz’s experience as a Cuban refugee, his aristocratic family forced out by the revolution.

Within its straightforward format, the doc can be charmingly unpredictable in a six-degrees-of-separation way. Cue the inimitable Charo, widow of Xavier Cugat and as unlikely a talking head as you might imagine. The singer comments on Arnaz’s mentorship by bandleader Cugat, her signature exuberance and nearly impenetrable Castilian accent unchanged in the decades since she was a talk-show fixture.

The cross-section of talking heads also includes the offspring of key creative collaborators on I Love Lucy, head writer Jess Oppenheimer’s son Gregg and director Marc Daniels’ son David, as well as the executive director and the lead archivist of the National Comedy Center — aptly located in Ball’s upstate New York hometown, blocks from the Lucille Ball Desi Arnaz Museum. Does that make Jamestown the center of the comedy universe? For people of a certain age, probably.

With a dynamic sense of propulsion, but never losing sight of the sentiments at the story’s core, Poehler, screenwriter Mark Monroe and editor Robert A. Martinez (the latter two both worked on The Bee Gees: How Can You Mend a Broken Heart and Ron Howard’s Pavarotti) choreograph a deft mix of the new interviews, home movies, behind-the-scenes footage and other rarities. Behold the beauty of Ball and Arnaz in a studio makeup test, delighting each other and dazzling the camera.

As to those core sentiments, the notion of family responsibility, informed by early trauma, united Ball and Arnaz from the get-go, however different their backgrounds. A terrible event laid low the working-class grandfather who raised her and her brother, and it set on her on the breadwinner path while she was still a teen. “I was eager to make enough to take the burden off their shoulders,” she tells an interviewer. The teenage Arnaz felt a similar weight after he and his mother fled their island country and started from scratch in Miami.

Their parallel tales are handled with concision and potency, leading to their meeting on the set of RKO’s 1940 musical comedy Too Many Girls and their marriage six months later. “Lucille Ball Weds Actor,” a headline blared, perhaps signaling the “Mr. Lucy” shadow that Arnaz would never quite escape, however accomplished he was as a charismatic performer, innovative producer and visionary businessman.

By the time they met, they’d each achieved a certain level of fame, Arnaz carving out a musical profile with the conga as “my dance of desperation” and Ball hailed as the so-called Queen of the Bs. It’s moving to hear her describe the thrill of seeing a character in a script described as a “Lucille Ball type.” But whoever wrote those words was undoubtedly talking about her looks, not her chops; as Midler succinctly puts it, it was “one of the great artistic crimes” that Ball’s comedic talents went untapped for so many years in those B pictures.

When TV came calling, she was a popular radio star, and she had sway. Creating their perfect showcase with I Love Lucy, she and Arnaz shattered preconceptions, proving that Americans could indeed embrace the idea of love between a white woman and a Latino (it would be a few years still before West Side Story put its high-profile tragic spin on such a “mixed” romance). Shooting on film before a studio audience, using multiple cameras, Arnaz rewrote the technological rules of TV, and the show became part of the cultural DNA with its sharp-as-a-whip slapstick and banter. In scene excerpts and spirited montages, Poehler pays homage to its finely honed delirium. To watch Arnaz and Ball at their height is to see the word “icon,” one of the most overused in the English language, restored to its meaning.

As the film interweaves scripted performance and unscripted commentary, David Schwartz’s score moves seamlessly between snazzy and poignant. But the key aural component belongs to Arnaz and Ball, thanks in part to audiotapes they made for themselves — perhaps not entirely unguarded, but far enough away from the spotlight to counter the polished cheer that fame required. Poehler uses this (not always identified) material to eloquent effect. In Ball’s case, there are also undated interviews with Betty Hannah Hoffman for Ladies Home Journal that became the basis for an autobiography, one that wouldn’t be published until years after the star’s 1989 death.

Perhaps most striking is the way Poehler lets a couple of discomforting questions to Ball, and her uneasy answers, play out. Hoffman poses an intrusive query about the star’s miscarriage; David Frost requests nothing less than the definition of love. In each instance, the question hangs in the air for a heavy moment before Ball replies. Then, her cigarette-roughened voice shorn of the Lucy character’s giddy vitality, she says, “I don’t know.”

Lucy and Desi covers a lot of ground, but Poehler’s aim isn’t a comprehensive career roundup. (One notable omission is Vincente Minnelli’s The Long, Long Trailer, the 1954 big-screen hit in which the couple played a variation on their TV characters.) Above all, the filmmaker is interested in the connection between them. It’s not just the spark that ignited small-screen magic but the affection and respect that outlived the sitcom, the marriage and the mighty business partnership, Desilu Studios. For a while it was the world’s largest independent TV production company. It ultimately played a role in pulling them apart, and they built it on the old RKO lot where they first met.