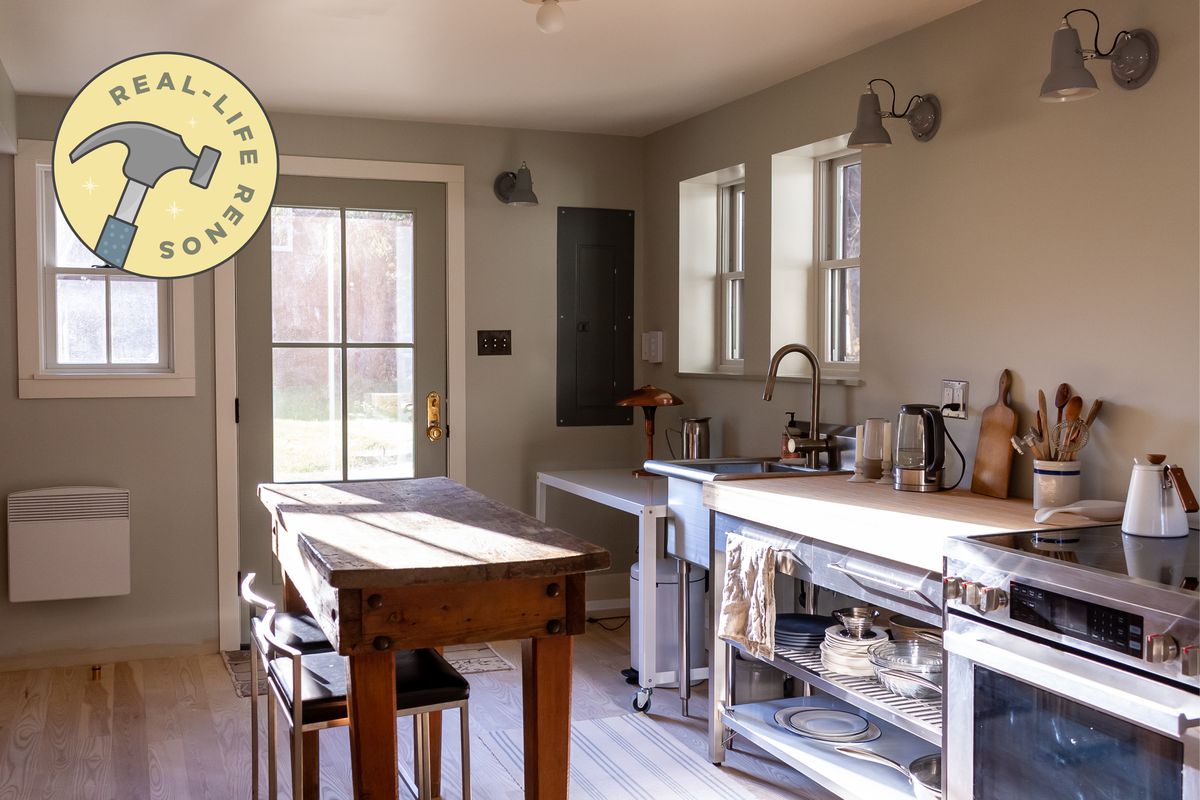 Welcome to Real-Life Renos, where we’re pulling back the curtains to the home renos we just can’t get enough of. Tag along as our favorite designers, chefs, and cookbook authors welcome us inside their spaces and share the behind-the-scenes stories behind their transformations. We’ll explore their takes on sustainable living, how they express their identities through design, how they create beautiful spaces that center around accessibility—and so much more.

At the height of the pandemic last year, my partner Casey and I bought a second home. We had always dreamt of owning a place we could escape to on the weekends, as so many in the city long to do. We began our search just prior to the outbreak of COVID.

After looking at several houses online during the lockdown, and viewing one property in person, we came across the 1890s farmhouse we would eventually purchase. It was a three-bedroom, two-bathroom home nestled outside a village in the Catskills, with a small stream running through the property, and views of a larger creek across the street. However, even with its strong bones and picture-perfect location, it was hard to ignore the work that was needed to make the house habitable. The roofing was on its last legs and needed replacing; the porch required a new foundation; and we had to deal with a minor mold and mildew problem (that’s ongoing). Undeterred, we closed in November 2020—a Thanksgiving weekend during which it rained cats and dogs.

Fast-forward to several weeks later, and what we thought was going to be a quick refresh on the kitchen: As we were removing the existing cabinets to install a modular kitchen, we discovered that the load-bearing back wall in the kitchen was soaking wet. After removing the soggy drywall to view the extent of water damage, we discovered that it extended all the way to the studs and the header, making the entire back wall unsafe. What was supposed to be a straightforward update turned into a nightmare as it became painfully clear this wasn’t something we could fix ourselves. We spent the rest of that weekend haphazardly DIYing a repair to keep water from seeping into other walls.

One month and three contractors later, we found our eventual contractor, Mark (our saving grace), to manage the reconstruction work that needed to happen to keep the house from tumbling down. Shortly after, we embarked on what often seemed like a never-ending, several-month journey of planning, debating, drawing, and rebuilding the 300-square-foot kitchen that we hadn’t anticipated rebuilding for some time.

The emergency renovation turned into a complete rebuild from the ground up. With so much that needed to be removed and reconstructed, my partner and I spent hours upon hours considering how we wanted the new kitchen to be built. It gave us the opportunity to reconsider how we wanted the space to function—and approach the entire house with a new perspective.

One idea that resonated with us was to strip the house to its simplest form, slowly adding back to it only when absolutely necessary. This was partially to ensure that our lack of experience wouldn’t come in the way, but also so we wouldn’t just get caught up in replicating the latest design trends. It was also at the core of how we wanted to utilize the house—and the relationship we wanted to foster with this space. Casey and I both wanted this renovation—and the ownership of the house—to hold us accountable to every decision we made while restoring it. It became less about what we could add to the space, and more about what we could live without.

Lessons in Sustainable Living From My 100-Year-Old Japanese Farmhouse

What Restoring an Old Home Can Teach You About Life

With the idea of stripping the house back in mind, we began by taking away anything that didn’t seem efficient. We questioned the importance of every room to our lives, and the attributes we wanted them to have. What were our priorities to make the space functional without over-designing—or adding modern conveniences—for the sake of it? Did we really need a bathroom downstairs in the back addition when there was one upstairs? Since we were used to having just one bathroom in our Brooklyn apartment, would we even miss it?

One of the other impactful decisions we made was to take down the small addition that extended off of the kitchen. It had added some much-needed square footage to the overall space, but was poorly constructed (and barely standing when it was stripped to the studs). As much as we both wanted to keep it, it became obvious it wasn’t up for long-term use. It also kept the downstairs from flowing seamlessly between the kitchen, living, and dining rooms.

We also made other decisions for ease of maintenance and practicality. Changing the heating system from oil-fired hydronic heat to wall-mounted panel heaters would mean more flexibility and fewer risks of water leaks—and it wouldn’t require us to be dependent on oil. We also knew there’d be a second heat source in the form of a wood stove, so the electric bill wouldn’t be astronomical.

The other major modification we made to the original kitchen was to remove the existing soffit that housed the plumbing and the piping for the previous heating system. Instead of keeping the soffit, we opted to remove it completely to make the kitchen one continuous space without visual breaks in the back wall. We even managed to push out the back wall by 10 inches.

After the structural rebuild was complete, Casey and I spent our time slowly picking and choosing materials and furnishings to install into the newly built kitchen, but also for the rest of the unfinished house. We could’ve wrapped everything up in a few weeks, but knew this didn’t fit in with being intentional and letting the work develop on its own. It took us several months (and one canceled order) to choose the flooring for the kitchen, for instance: a sustainably-sourced watershed ash we serendipitously received that was a surplus from a larger project.

We questioned the importance of every room to our lives, and the attributes we wanted them to have. What were our priorities to make the space functional without over-designing, or adding modern conveniences, for the sake of it?

Because we also understood our needs might change over time, and wanted flexibility to modify the kitchen in the future, we ensured it was as modular as possible. This not only simplified the selection of items for the kitchen, it helped with our budget. From the utility stainless steel sink to the standalone pieces used for counters and an island, it creates a sense that the house is a living and breathing entity that can change and adapt to fit our needs.

Each item I sourced for the kitchen was purchased keeping simplicity and ease of maintenance in mind. The trims and mouldings are simple, while the light fixtures are either bare-bulb or open-bottom shades. Keeping the kitchen unfitted also allows us to engage with the space before committing to things like custom cabinetry—and we have the flexibility to move things around. We can now test things out without feeling like we are committed to a style, design, or material we may not enjoy later.

As we’re nearing the final stretch of completing the kitchen, last year’s journey has been a deep dive into the world of home ownership. This slow, intentional design process has allowed us to fully explore what options suit our needs, and to take our time finding the right materials. With many more projects to tackle, and rooms to complete, it will be interesting to see where we are this time next year—and how the house has evolved with us.

Putting Down Roots in a 221-Year-Old Kitchen in Italy