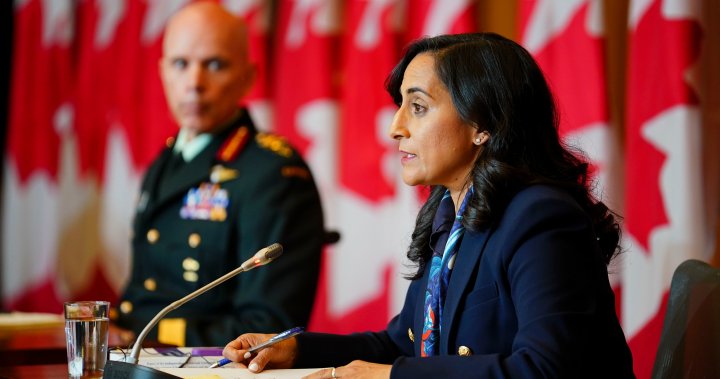 Jocelyne Therrien has been named as the promised external monitor tasked with overseeing the military’s implementation of efforts to address sexual misconduct, Defence Minister Anita Anand announced on Monday.

The appointment of an external monitor was a key recommendation from the highly-anticipated report into what experts have described as a “crisis” of sexual misconduct within the Canadian Forces, which former Supreme Court of Canada justice Louise Arbour concluded in May of this year.

The blistering report found that the top ranks of the Canadian Armed Forces are “incapable” of recognizing the “deficient” parts of a culture that keep sexual misconduct and abuse of power entrenched.

Military recruiting issues may be ‘more serious’ than senior ranks letting on: Hillier

“The appointment of Madame Therrien is important because the entire Arbour report addresses the need for greater protections and resources for those who suffer from sexual harassment, sexual discrimination and any type of bias in the Canadian Armed Forces,” Anand said.

Therrien is a former executive from the Office of the Auditor General of Canada, a role that saw her audit federal government entities multiple times. More recently, Therrien helped to review four cases of workplace harassment within the RCMP, according to a press release from Anand’s office.

With 48 recommendations, Arbour’s report charts out a new path to fundamentally change the way military sexual misconduct allegations are reported and handled in order to restore confidence in the Canadian Forces, which continues to struggle with recruitment.


The Canadian Armed Forces is supposed to be adding about 5,000 troops to regular and reserve forces, to meet a growing list of demands, but are instead short more than 10,000 trained members – meaning about one in 10 positions are currently vacant.

Global News first brought to light allegations in February 2021 of sexual misconduct against senior leaders in the Canadian Forces — the first of dozens of exclusive reports into such allegations and the military’s handling of them over the past 18 months.

Those revelations and the courage of survivors and victims who spoke out spurred a political and societal reckoning that remains underway.

In her 403-page report, Arbour described an institution that is fundamentally out of sync with the values of Canadian society, and which poses a “liability” to the country.

“Firmly entrenched in its historical way of life, the military has failed to keep pace with the values and expectations of a pluralistic Canadian society, increasingly sophisticated about the imperative of the rule of law,” Arbour wrote.

“Operating as a totally self-regulated, self-administered organization, entirely reliant on deference to authority, it has failed to align with the ever-changing, progressive society we live in. This disconnect is a liability for the CAF and for Canada.”

Canada’s military a ‘broken system’ that’s a ‘liability’ to the country, report finds

Therrien will initially be appointed for a term of one year, during which time she will be tasked with monitoring the implementation of the Arbour report’s recommendations and will provide “regular reports” to Anand on this work, according to the department of National Defence.

In a press release announcing her new role, Therrien acknowledged that this is a “critical time” for one of Canada’s “key institutions.”

“I am honoured to serve as the External Monitor and will fulfill these duties openly and accountably,” she said.

“I look forward to working with Minister Anand and the Department of National Defence and Canadian Armed Forces on this important work.”

— with files from Global News’ Amanda Connolly and Aaron D’Andrea