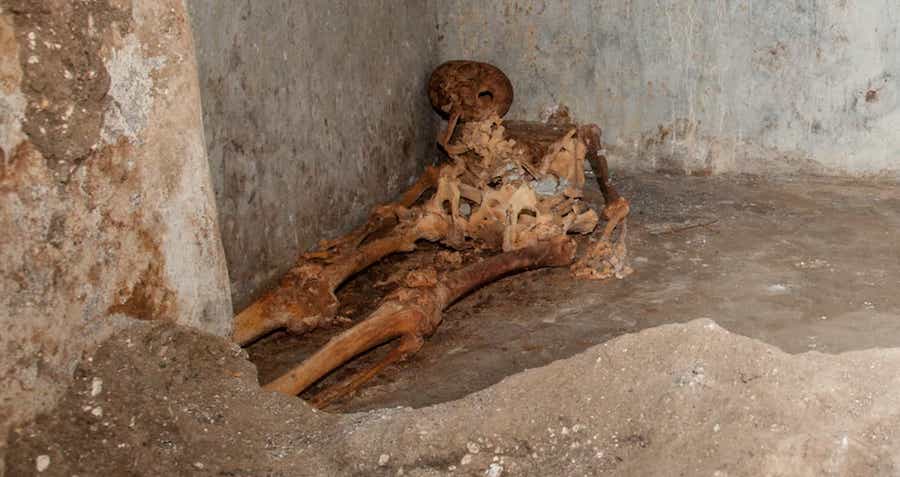 The remains are those of an elderly man who died and was buried shortly before the eruption of Vesuvius in 79 A.D. — and they still bear traces of his white hair and a preserved ear.

When Mount Vesuvius erupted in 79 A.D., volcanic ash and toxic gas barreled over the Roman city of Pompeii and glued the town shut. While invaluable relics have been unearthed from its grounds in the centuries since, a recent dig just yielded the best-preserved set of human remains ever found in the ancient city.

A team of researchers from the European University of Valencia and the Archaeological Park of Pompeii found the remains in a tomb within the Porta Sarno necropolis. The Porta Sarno was once the main eastern entrance to the city and a prestigious place to be buried.

Dating to the decades before Pompeii’s destruction, the tomb was adorned with a marble slab and inscription, which provided the name of the man buried within as Marcus Venerius Secundio — as well as the first direct evidence that theater plays in Greek were once held in Pompeii.

Secundio’s body was remarkably well-preserved, and his skull still showed the remnants of his white hair, skin, and even an ear. The discovery is all the more remarkable because ancient Roman adults were usually cremated in death, suggesting that Secundio chose to be buried in this fashion, according to Llorenç Alapont, the Valencia university archaeologist who helped excavate the site.

“The tomb at the Sarno gate is really an extraordinary discovery because of all the information it can give us, a unique burial for that era in Pompeii,” he said. “And it may in some ways also change our knowledge on the rules of death rites in the Roman world.”

Secundio has been identified as a former slave who managed to climb the social ladder before dying around the age of 60.

Though mention of the man had previously appeared on the wax tablet archive of Pompeii banker Cecilius Giocondus, Secundio’s resting place remained mysterious until now. The inscription on his tomb revealed he “gave Greek and Latin ludi for the duration of four days,” while the stature of his tomb suggested high status.

As a slave, Secundio had served as a loyal custodian of the Temple of Venus. Erected in Rome in 46 B.C., the temple was dedicated by Julius Caesar to Venus Genetrix, the mother of Trojan hero Aeneas.

After buying his freedom, Secundio rose in the ranks as a member of the imperial cult of the Augustales, a college of priests devoted to emperor worship. There, Secundio toiled at providing Pompeii with emperor-worshipping entertainment in both Greek and Latin until his death.

As the director of the Archaeological Park of Pompeii Gabriel Zuchtriegel explained, the inscription provides groundbreaking evidence of a multicultural city.

“It is the first clear evidence of performances at Pompeii in the Greek language, which had previously been hypothesized on the basis of indirect indicators,” said Zuchtriegel.

Archaeological Park of PompeiiThe inscription Secundio’s tomb says that he “gave Greek and Latin ludi for the duration of four days.”

“Here we have another tessera of a large mosaic, namely the multi-ethnic Pompeii of the early Imperial Age… is indicated alongside Latin,” he said.
“That performances in Greek were organized is evidence of the lively and open cultural climate which characterized ancient Pompeii.”

The eruption of Vesuvius left Pompeii buried under 13 to 20 feet of pumice and volcanic ash until its rediscovery in the 18th century. While archaeologists have excavated the calcified remains of residents and animals in recent years, none were found quite as intact as Secundio.

Secundio’s sealed tomb provided the perfect conditions for preservation, although Alapont remains curious how intentional that truly was. He explained that the historical record suggested some Romans used asbestos for embalming, but further analysis of clothing fragments found in the tomb was needed to determine if that applied here.

“We still need to understand whether the partial mummification of the deceased is due to intentional treatment or not,” he said.

“Even for the likes of me, who have been specialized in funerary archaeology… the extraordinary wealth of information offered by this tomb, from the inscriptions to the burials, the osteological finds and the painted facade, is exceptional.”

Aside from Secundio’s remains, experts also found an unguentaria (or glass bottle) inscribed with the name of woman, Novia Amabilis, who might be Secundio’s wife. Ultimately, the collaborative research teams retrieved these items from the 5.2-foot by 7.9-foot tomb and transported them to Pompeii’s Laboratory of Applied Research for study.

As for the Porta Sarno Necropolis, the Archaeological Park of Pompeii has begun rigorous maintenance in advance of thorough restorations that will lead to open visitor access and many more discoveries in the future.

After reading about the best-preserved human remains ever found in Pompeii, take a look at 14 agonizing photos of the bodies of Pompeii. Then, read about the military horse prepped to rescue victims found at Pompeii.