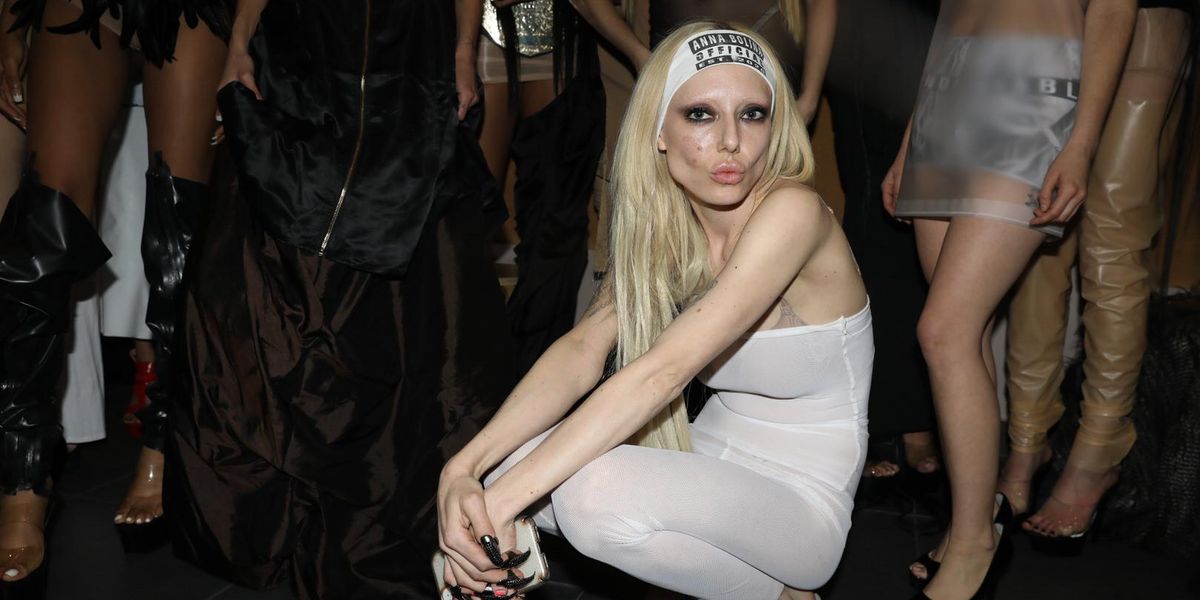 Anna Bolina is the downtown Donatella, if the 66-year-old Italian icon rode the subway, snuck ketamine bumps at Bossa Nova and formerly danced at a strip club (Bolina once performed at the now-closed Scores in Chelsea). The designers’ fantasies stem from the same place — sex appeal to the front, with glamorous, stiletto-heeled fashion at the core — but Bolina pushes it to an extreme, capturing the grounded grit of New York after dark.

At NYFW Friday night, Bolina took over a Chinatown mall to present her Fall 2022 collection, hosted by WHAAM! gallery. Guests in Jeffrey Campbell Lita’s (they’re back), overwhelmed security guards and Mark Hunter, The Cobra Snake, all lined the walls, as models ascended from basement escalators with bone-straight hair (bleach blonde is in, despite what TikTok might argue).

“I wouldn’t say that I am my own muse, I would say my life is my muse,” Bolina explains, reflecting on the way her lineup could be interpreted as an army of herself. “I get inspiration from my experiences and people around me. So in a way, yes, there’s a lot of me that seeps in.”

Friends of Bolina were cast, including writer Rachel Rabbit White, who circled the venue clutching her outfit together — intentionally, like being caught in the act or greeting a hookup at the hotel door, slightly disheveled. They were the object of desire, playing off Bolina’s now signature phrase, Who are we trying to impress, that she’s bedazzled across hoodies and tees.

“I’m trying to impress everyone,” Bolina admits. “I’m not trying to say that I don’t try to impress people. I definitely do, but l try and remember: it really doesn’t matter at the end of the day. Who are we trying to impress is more aspirational. I wish I didn’t care about impressing anyone.”

This season subverted traditional mens staples, mixing in feminine styles like a sheer, floor-length gown or ruched, white party dress. One look suspended an entire trench coat off the model’s side to reveal her bra and underwear on the other half (it was actually a dress, lined with fleece). Another blazer, styled without pants, had exaggerated fur shoulders that bounced with every strut and looked like an extension of the model’s peroxide wig. Zippers and nipples were Bolina’s main accessories, with a few wrestling belts thrown in for added intensity. Indeed, her girls looked powerful.

“I love using menswear and flipping it on its head, making it elegant and flattering to a woman’s body,” Bolina says. “It’s easy to put a girl in a tight outfit and have her look sexy. I don’t just want to do that, it can be boring. It’s funny because people still saw this collection as super revealing [Vogue said she left “Nothing to the Imagination”]. I thought it was pretty conservative and covered up with all the jackets and deconstructed menswear.”

Still, the designer’s self-described “raw approach to being feminine” is all about maximizing the drama. Bolina wants her hair the “longest it can be,” her nails “long and bright,” and her heels towering. “It’s not delicate, it’s in your face,” she says — a “matter of fact” sexiness. “These are the tools I use to provide an experience for myself and for those around me. I want people to feel that way when they put on my clothes like, I can do anything I want to do and be anything I want to be. It’s just a matter of doing it.”