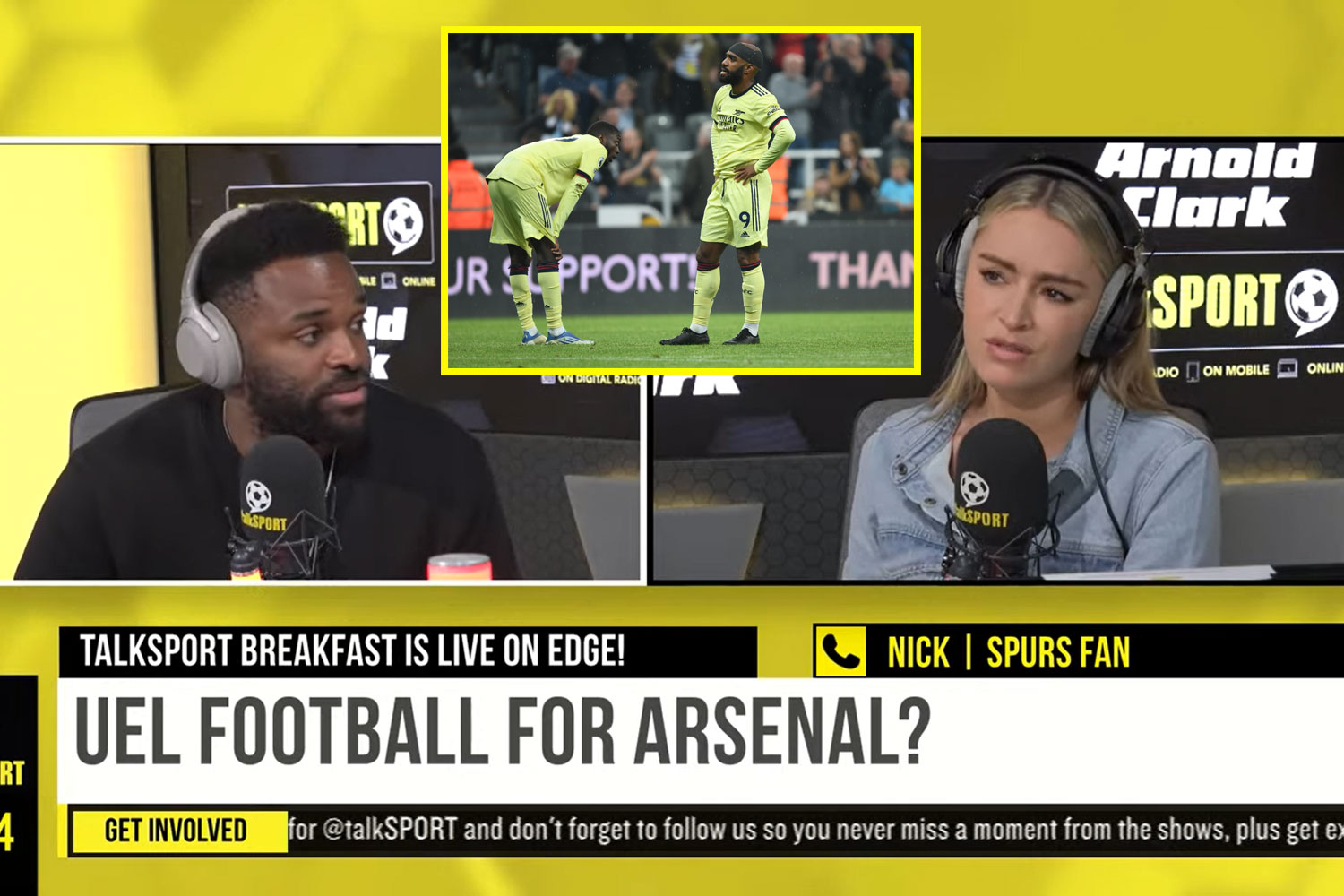 Laura Woods wasn’t having any of it when a Tottenham fan called into talkSPORT and accused Arsenal of having a ‘small club mentality’.

Arsenal were condemned to a 2-0 defeat at Newcastle on Monday evening, putting Tottenham in pole position to finish in the top four in the Premier League at their expense.

Our Breakfast host, Woods, and co-host Darren Bent – both lifelong Gooners – were receiving calls on on the morning following their club’s defeat – most notably from Spurs supporters.

And it was one Tottenham fan in particular, Nick, who got on the wrong side of Woods as he stated Arsenal letting fourth place slip was ‘the biggest collapse of all time’.

Nick: “You two are so biased it’s unbelievable. If this was Tottenham, honestly, all this ‘how Tottenham have bottled it’, ‘how we choked’, all these stories would be coming out.

“The fact that you guys didn’t have any European football this season. The fact you didn’t spend any money in the summer.

“You know in the middle of March you had a goal difference of 10+ on Tottenham and about six points. This has got to be the biggest collapse of all time, it has to be.”

Laura: “It’s not the biggest collapse of all time, Nick and I don’t mind you calling me bias because I am an Arsenal fan.

“I will say as well, at one point of the season which was months ago, we were saying if Arsenal get top four it’s an overachievement, I stand by exactly what I said then, 100 per cent.

“Yeah we spent money probably in the wrong areas, [Pierre-Emerick] Aubameyang didn’t work, I don’t think anyone could’ve foreseen the collapse that happened there, the fact he didn’t score any goals, there’s been a lot of injuries.

“You’ve got Harry Kane, you’ve got Heung-Min Son, your signings have absolutely worked, been in Europe the last four seasons while we’ve been out of it so no surprise to me Nick.”

Nick: “That’s really sad because it sounds like a small club mentality Laura.”

Laura: “I think Nick, coming from a Spurs fan, you’d know exactly what a small club mentality is all about.

“Arsenal are trying to get back somewhere, and I think finishing fifth, even if that happens, again, you’re not going to get me to say we’ve collapsed.

“Yeah, totally, I don’t even mind saying it actually Nick, we bottled last night, totally bottled those three games in a row to the likes of Brighton, Crystal Palace, Southampton, absolutely bottled it.

“But you can’t get me to say they are completely collapsing this season and it’s been a terrible season because I don’t think it has.”

Nick: “You know I think this is spreading to the fan base now as well, you are a small club because you say Tottenham are a small club, but Tottenham’s last three managers have been [Mauricio] Pochettino, then we went out and got [Jose] Mourinho.

Laura: “Yeah, and what did you do to Pochettino? You sacked him.”

Nick: “Managers get sacked in football all the time Laura, that’s what happens.”

Laura: “Yeah I understand, I watch football, but why are you using him as an example?”

Nick: “What I’m saying is, we’ve had Pochettino, we’ve had Mourinho we’ve got [Antonio] Conte, how is that a small club mentality? You’ve got a manager that has really no experience and you’re probably the third biggest club in the country.”

Laura: “You’ve just done me a favour there, Nick, you’ve just highlighted that you had Mourinho and Conte now and you’re still only just pipping Arsenal who have a so-called ‘small club mentality’.

“Also talking about a manager like Mikel Arteta that has ‘no experience’, he still managed to come in and win the FA Cup before you guys did.

“So let’s come back and talk about small club mentalities when you manage to win something, Nick. Lovely to have your call though!”

Don’t mess with Woods when it comes to Arsenal, Nick! Will Spurs bottle it on Sunday?