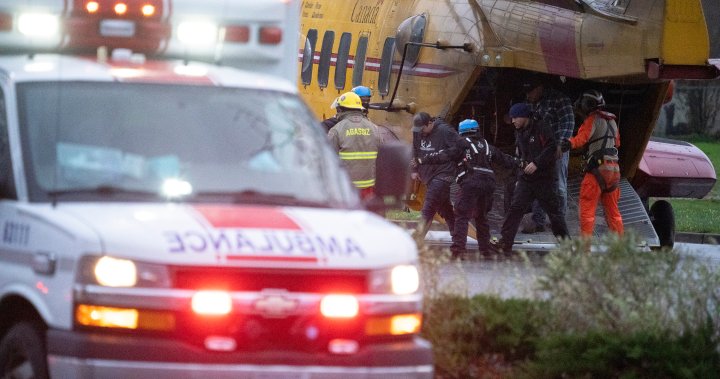 As the Canadian Armed Forces sends additional troops to respond to floods in British Columbia, military and disaster management experts say now is the time to invest in civilian response teams.

This week’s catastrophic rainfall event left a handful of towns and cities under water, displaced thousands of people, killed at least one, and done millions of dollars in damage to critical infrastructure.

According to federal statistics, the number of calls for military response to natural disasters has nearly doubled in the last decade. Five of 23 calls for help in the last four years have come from B.C.

“With the increase in natural disasters that we’re seeing due to climate change, and in terms of scale, scope and frequency, we need to start saying, ‘Is there another alternative? Is there a better way?’” said Josh Bowen, an instructor at the Northern Alberta Institute of Technology’s Faculty of Disaster and Emergency Management.

Bowen, a veteran and former deputy director of the CAF’s disaster and emergency response plans in Edmonton, said the military is a “force of last resort” in a disaster and has a finite budget.

It’s the only force in Canada with the expertise to respond immediately and effectively to a natural disaster, he added, but that may not cut it as the effects of climate change intensify.

“What I would argue is that we need to look at what our neighbours, what our NATO allies, what our G20 allies are doing to be able to have a civilian response capability,” Bowen said.

Countries like Germany and Australia have formalized large pools of civilian volunteers to respond to disasters — a much less expensive option than deploying the military.

According to Bowen, every dollar spent in disaster mitigation and prevention saves $6 in response and recovery from a disaster, which is why provinces must invest in localized solutions.

That includes not only civilian response teams and their training, but more climate-smart land-use planning.

Read more:
‘The goods are coming’: Pleas for patience in B.C. following reports of panic buying

Details of the military’s deployment to B.C. were still being finalized on Wednesday, a spokesperson for the Canadian Joint Operations Command told Global News.

Examples of support that could come include transport assistance, logistics chain support to get resources from one point to another, and humanitarian aid, though details remain to be settled.

“Yes the military can do this, the question is, should the military be doing this?” asked Christian Leuprecht, a security expert and professor at the Royal Military College and Queen’s University.

“It’s not like the military doesn’t have other things on the go — the military is fully tapped out with what we’re already asking them to do.”

In 2021, Canadian troops were deployed to support provinces with both the COVID-19 pandemic and wildfires. The National Department of Defence’s budget is about $23 billion for 2021-2022.

“One of the challenges is, as long provinces know that they can always call on the federal government to bail them out when things go wrong, provinces and municipalities have an incentive to underinvest in critical infrastructure,” Leuprecht said.

The military is not in the best position to repair underfunded municipal infrastructure, he explained, nor to provide food, logistical support and aid in the “medium term.”

Adam McDonald, a PhD candidate at Dalhousie University’s Department of Political Science and a fellow at the Canadian International Council think tank, said there’s no system in place for provinces to share resources or move their assets around the country in a disaster.

The federal government must make a political decision about what the true priorities and responsibilities of the military are, he added, as climate disasters intensify.

“I think unfortunately that side of the house is being thought about in really deep ways, and it’s going to do a disservice to Canadians across the country if we don’t start planning for that.”