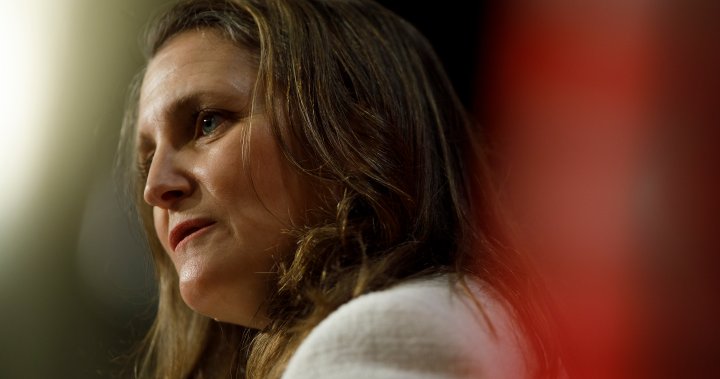 Canada has a “political responsibility” to step up as Russia strangles flows of natural gas to European allies — and that includes a role for Ottawa in advancing a potential East Coast LNG plant, says Deputy Prime Minister Chrystia Freeland.

Speaking with journalists from Saint John, N.B., on Wednesday, Freeland was asked about whether Canada should be doing more to supply European countries with LNG — liquefied natural gas — as those countries rapidly scale back their dependence on Russian fuel following its invasion in Ukraine.

“I do think that energy security today, more than ever, is a question of security full-stop and Canada’s really lucky. We have a lot of energy. I think it is a political responsibility for us as a country to support our allies with energy security,” Freeland said in response.

“This is a very tough moment for many European countries right now as they shift from their dependence from Russian oil and gas and I think it’s very important for Canada to step up and say, ‘We’re going to help you.’”

On whether she backed a plant in Saint John specifically, though, Freeland did not say.

“I think this is not the moment to pick specific projects,” she said.

Canadian leaders have in recent years increasingly touted LNG as a more sustainable and competitive product for investors amid a global push to reduce emissions and mitigate climate change.

But investors including Warren Buffet raised concerns in 2020 about “the current Canadian context” around LNG, which was widely interpreted as skepticism about the response to rail blockades and protests against the Coastal GasLink pipeline on the West Coast.

In response, Russia has choked off natural gas supplies through the Nord Stream 1 pipeline into Europe, and countries like Germany are now facing the prospect of a winter gas shortage.

That pipeline carries some 55 billion cubic metres of natural gas each year, and Russia has cut the flow to roughly 20 per cent despite the return by Canada of a controversial turbine from the pipeline that had been in Montreal for repairs.

Foreign Affairs Minister Melanie Joly held a press conference with her German counterpart earlier on Wednesday and described that decision as one that “calls Putin’s bluff” and removes any plausible excuses for not restoring the flow of gas through Nord Stream 1.