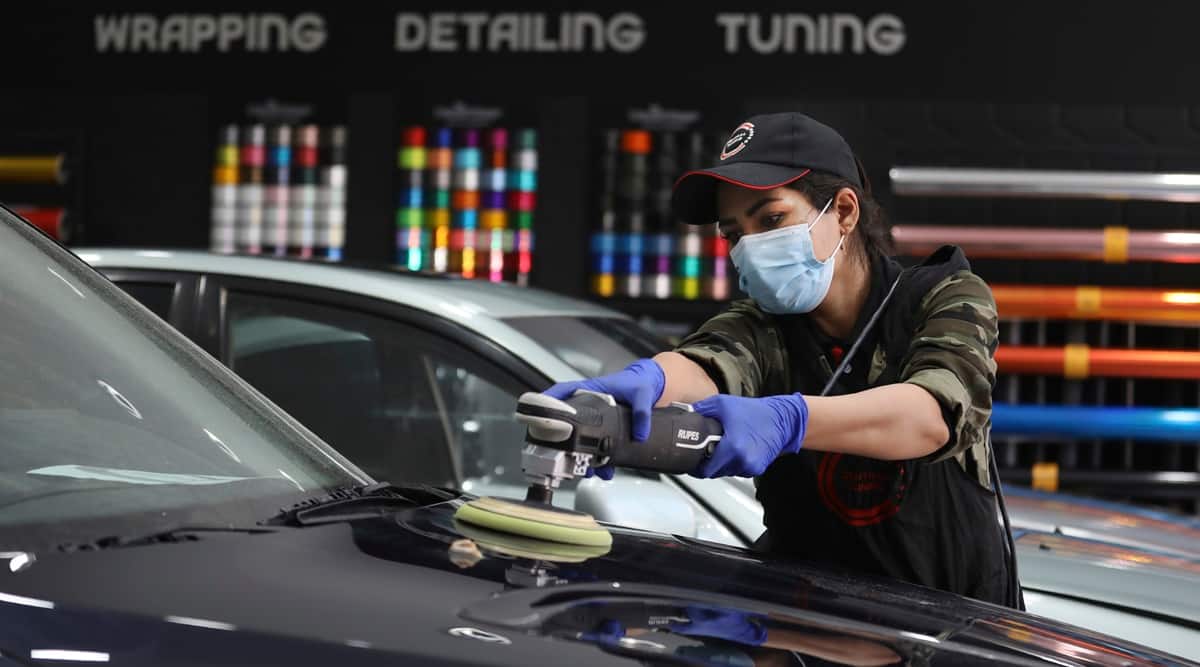 It’s a men’s-only club in the tangle of auto repair shops on the traffic-clogged streets of Iran’s capital, Tehran. Among them, workers toil in dim garages, welding and wrenching, fabricating and painting.

That’s until Maryam Roohani, 34, pops up from under a car’s hood at a maintenance shop in northeastern Tehran, her dirt- and grease-stained uniform pulled over black jeans and long hair tucked into a baseball cap — which in her work, replaces Iran’s compulsory Islamic headscarf for women, or hijab.

Buffing a blue BMW sedan in the shop until it shines, she couldn’t be farther from the farms of her childhood.

In the rural, tribal village of Agh Mazar near Iran’s northeastern border with Turkmenistan, girls get married after hitting puberty and devote their lives to raising children.

“I have sort of broken taboos,” Roohani said at the garage, where she carefully coats cars with attention-getting gleams and scrapes sludge from their engines. “I faced opposition when I chose this path.”

The auto industry remains male-dominated around the world, let alone in the tradition-bound Islamic Republic. Still, Iranian women, especially in the cities, have made inroads over the years. They now make up over half of all college graduates and a sizable part of the workforce.

A farmer’s daughter, Roohani grew up laboring on the land like most other children in Agh Mazar.

But unlike her five siblings, she had her eyes on her father’s tractor, and developed an uncanny knack for driving it at an early age.

Even as she worked as a hairdresser and studied to become a makeup artist in Bojnurd, the provincial capital, a greater passion pulled her in: applying finishes to cars.

To the scorn of villagers and some family members, she traded used cars for extra cash and dreamed of working as a car polisher and detailer.

Although relatives turned against her and cut off contact, her father had a more liberal attitude, supporting her despite the pushback and letting her postpone marriage to pursue her love of polishing.

There were no international car polish training programs she could find in the rolling wheat and barley fields of North Khorasan province, nor elsewhere in the country at the time. So she flew to Turkey, where she battled male skeptics to earn her car polishing certificate.

Armed with credentials, she set up shop in a small, rented space at a Tehran garage.

But her initial successes drew resentment from male colleagues — and at times, even sabotage.

Some tainted her polishing pads with acid to burn the paint off her customers’ cars, she recounted.

Others tampered with her machines and tore up the costly pads that she purchased with her life’s savings, she said. Complaints to the garage’s owner went nowhere and without hard evidence, the police couldn’t help either.

Roohani wanted to cut and run after that. But her reputation had grabbed the attention of a prominent Tehran auto shop, which suddenly offered her a job. For the past few years, she has lived out her dream as a professional car polisher, detailer and washer.

Roohani even now trains and inspires other women to do the same despite the obstacles.

Her online videos include her hard at work polishing a vintage Chevrolet Chevelle or smiling over the hood of a freshly detailed jet-black BMW, so smooth that a plastic cup slides down it.

“I got excited the first time I saw (Roohani) because in Iran, with its limitations for women, we are not usually trusted to do such jobs,” said Farahnaz Deravi, one of Roohani’s trainees.

To preserve its foreign currency, Iran banned the import of Asian and European-made cars, causing prices of the vehicles to quadruple.

Iranians with the means to own expensive cars cherish them more than ever and pay hefty sums to maintain the status symbol.

Although Roohani’s business is brisk, Iran’s economy is struggling with a series of mounting crises, including international isolation and a raging pandemic. Roohani now imagines her future as a professional detailer abroad, and hopes to start her own business somewhere in Europe one day.

“‘The Iranian Miss Detailer’ must shine out there,” she said, smiling.